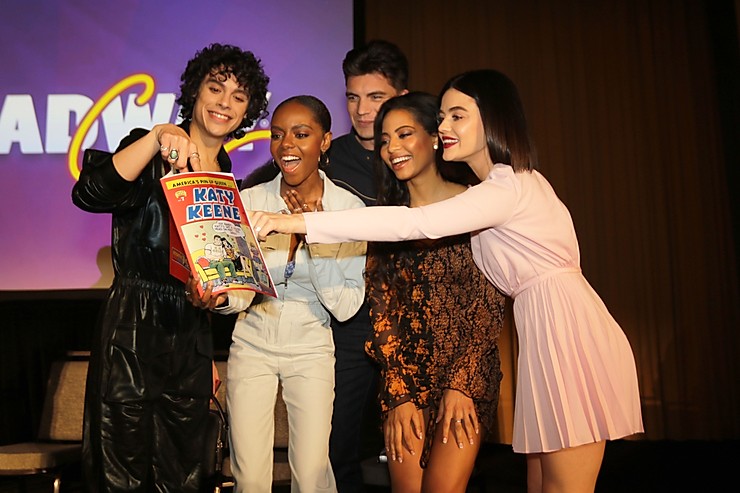 Star of the new show Katy Keene, which premiers Feb 6 on the CW Network pose wirh a comic book, on which the show is based, at screening at the years Broadway Con event in NYC. l-r Johnny Beauchamp, Ashleigh Muarry, Zane Holtz, Camille Hyde and Lucy Hale. Photo by Brian Hester

Katy Keene, a highly anticipated new TV show, a spin-off the popular CW Newtork hit Riverdale, will air Feb. 6, 2020 on The CW Network. Fans at this years Broadway Con, a three day celebration of all things Broadway, were treated to a sneak peak and got to see the first episode ahead of its Feb 6, 2020 world primeir. The screening was followed by a panel discussion with the producers, creative team, and stars of the show, which films here in NYC. Security was tight an patrons were sternly warned not to record any part of the show during the viewing as it has not aired yet. I can’t and don’t want to spoil the surprise but let me just say Tune In!!! Feb 6.

Based on the Archie Comics characters, the show follows the fortunes of four young professionals as they seek fame and fortune as well as love in the Big Apple.

Beauchamp, 30, plays, Jorge/ Ginger Lopez who dreams of performing on Broadway. Chan, 36, is ‘IT’ girl Pepper Smith who wants to have her own fashion empire.

Holtz, 32, stars as Katy’s longtime boyfriend who works as a personal trainer while trying to make it as a professional boxer.

Hale is best known for her starring role on ABC/Freeform’s Pretty Little Liars that ran for seven seasons from 2010 to 2017.

Earlier this year, she recently wrapped filming on the big screen reboot of Fantasy Island with Maggie Q and Charlotte McKinney. She also has three independent films in the can.

The cast was relaxed and the fans in attendance got an intimet, up-close and person experience.