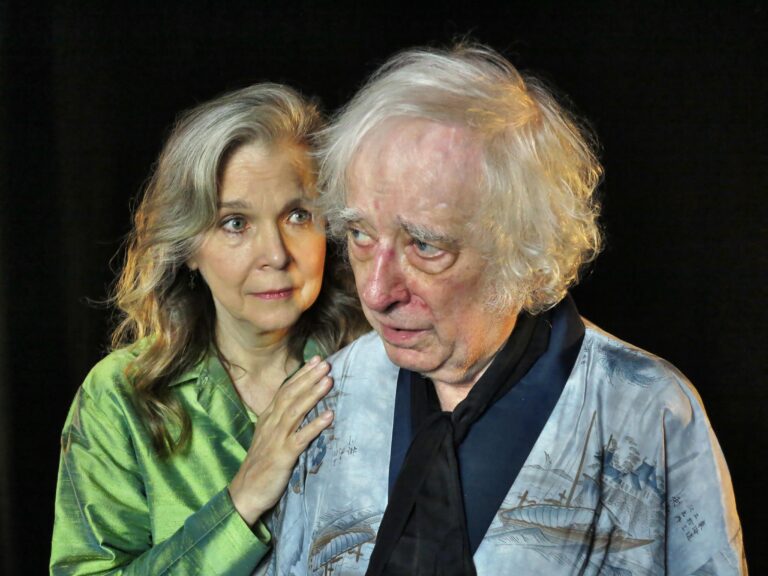 I have the upmost respect for awards: awards given to athletes, entertainers and especially in my older years, to writers. When I read about a play written by Bernard Kops, starring Austin Pendleton I figured what could go wrong? The good news is that at the start of the show at Theater for the New City, the person who normally tells us where the fire exits are, kept it under 5 minutes long!

The bad news is that the show started about 15 minutes late and I am sure many audience members prayed for a fire 20 minutes into the show! If this is a standard writing of Kops, I do not understand how the Queen of England could give him the Civil List pension; after all, that was also awarded to writers like Lord Byron, Wordsworth and Alfred.

After seeing The Dark Outside, I can tell you that Kops is no Lord Byron. The Dark is a play that tries to be something for everybody… it talks Nazi’s, climate change, rape, woman’s rights, socialism, alcoholism, racism (the area has a lot of teen shootings). Maybe this play would have been more sufficient and efficient if Walt Spangler designed a set. The families house is the obvious choice, instead, Spangler went with three chairs and some leaves. It is mindboggling almost because yesterday I saw a great set by him at A Turtle on A Fence Post.

If the story wasn’t bad enough, the directing by Jack Serio didn’t help. All five actors struggled to get by with their lines and the actors were lifeless. The direction left a seasoned professional like Austin Pendleton struggling. It made Katherine Cullison look like an amateur.

The English accents were good on both Penny (Kathleen Simmonds) and Sophie (Brenna Donahue), but where was Paul’s English accent(Pendleton)? Paul was from the West End of London when he came to New York; he met Helen (Cullison) at MOMA, they fell in love and she moved to London with him. They live in the house where he grew up in.

Kops gives us bits and pieces of their lives, but he never scratch’s the surface, we don’t know why Sophie is so miserable until the end. Even then we hardly care because the actors never had any emotion at the start. The family tells each other ad nauseam that they love each other, but the love is all to robotic. We never feel warmth with any of them no matter how many silly songs they sing. In the scene where Paul’s son, Ben tells his father off because his dad was a black shirt Fascist, it has no depth nor ump. The daughter’s Penny and Sophie, sometimes hit home with their lines, Ben (Jesse McCormick) is out in left field some where. McCormick’s timing, accent and believability are not to be found in this play.

Keith Parham tries gives us nice lighting and Nick T. Moore’s sound is good, though that cannot help this play. It struggles from the start and is laid naked with a baron stage, lackluster direction, malaise delivery and a very dull story, The Dark Outside left the audience wondering why this show was ever produced inside.

The Dark Outside: Theater for the New City, 155 First Avenue

Suzanna BowlingNovember 21, 2021
Read More
Scroll for more
Tap
A Turtle on A Fence Post Climbing Ladders
Returning to the Grand Theatre, London (Ontario) and Rejoicing with Mark Uhre’s Seeds of Self on Stage