The Day Before Spring A Gem of A Musical 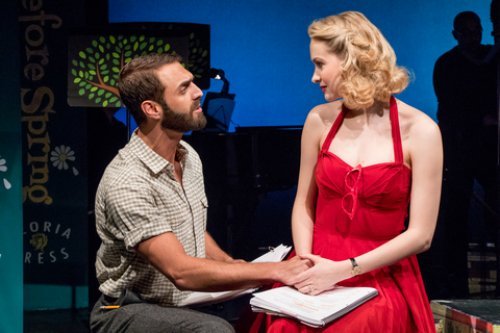 The Day Before Spring A Gem of A Musical

The newest musical to be a part of the Mufti series is the delightful Lerner & Loewe ditty The Day Before Spring. This well sung production by the York Theatre has never been professionally recorded and after hearing this glorious rendition I hope that will be rectified.

The Day Before Spring was performed in July 2007 by the York Theatre Company starring Hunter Bell, Amanda Watkins, Richard Todd Adams, Edward Watts and Tia Speros. That version included material that had been missing since the show closed on Broadway in 1946.

In 2010 the Lost Musicals project presented The Day Before Spring at the Sadler’s Wells Theatre in London.

Not to be out done, director Marc Acito, abridge the book, so that it is performed as an intermission-less, 90-minute one-act.

In the show we follow Katherine (the charming and wonderful soprano Madison Claire Parks ) a married woman who reunites with the man (Jesse Manocherian) she almost eloped with ten years earlier at a 10-year college reunion. She is romantically stirred by a novel he has written about her. Her husband Peter (Will Reynolds) a chemical engineer is looking to find the inventor (the glorious voiced Jonathan Christopher ) who has a product that his company needs, who is also at the reunion. When Peter realizes he may lose his wife, he wakes up to fight for her.

In the meantime the dean’s daughter (Alyse Alan Louis), almost steals the show with her rendition of “My Love is a Married Man.” Also in the cast are Michelle Liu Coughlin, Nicolas Dromard, Brittany Santos, Ian Lowe, Kent M. Lewis and Judith Ingber, who make these mostly unheard of treats, presents to the ear.

This is well worth checking out and hearing this wonderful score that is not only tuneful, but endearing.