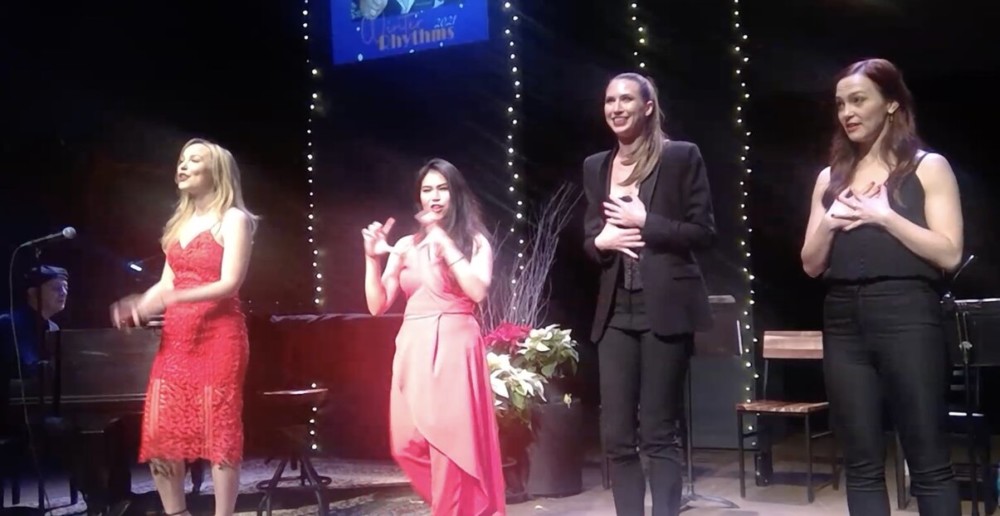 Kea Chan (54 Below and Green Room 42), Mollie Downes (National tour Chicago) Jennifer Noble (Broadway’s King Kong) and Sarah Parnicky (Award winning Desperate Measures) were delightful, telling their stories about surviving COVID. Starting off with a parody of Sondheim’s “I’m Still Here” From Follies, the quartet made the most of Craig Horsley’s new lyrics.

First up was Mollie Downes who brought country back to New York with Adele’s “One and Only”.

Sarah Parnicky sang a gorgeous controlled version of “Somewhere” from West Side Story, reminding us the Spielberg version is here.

Kea Chan missing her family in the Philippine sang a heartfelt “Home” from The Wiz. This girl has a sexuality to her that is both innocent and provocative.

Back together, the girls thanked the audience for being a friend. These Four have chemistry and a likability.

Jennifer Noble who is the face of Chicago brought back Barbara Cooks “Vanilla Ice Cream” from She Loves Me. As her high notes thrilled accompanist John DiPinto showed his skill as he had on the other songs as well. What a wonderful accompanist.

Kea Chan was back taking us to church with “You Raise Me Up.”.

Jennifer Noble just got married, so to let the audience know how she felt, showed off her belting side with Jason Robert Brown’s “Good-Bye Until Tomorrow” from The Last 5 Years.

Sarah Parnicky during COVID went to Wala Wala were the dating scene was limited. Her take on “Dream A Little Dream” made me wonder why this song and why this key?

As Mollie Downes began the show, so she ended the piece with Cabaret.

Letting the audience know again that to have them back in the theatre meant everything to them Four sang “What I Did For Love” into a reprise of “Thank-You For Being A Friend,” making us happy we were a part off this evening.

Four has some really good moments. Acting could be improved upon, as well as some song choices, but these Four women have chemistry and with more song selections, this could be a longer running show.

Due to being sick I reviewed this show through video.

Suzanna BowlingNovember 9, 2022
Read More
Scroll for more
Tap
Back Home for the Holidays and The New York Pops Returns to the Stage after 22 months with Kelli O’Hara at Carnegie Hall
My View: An Historic Evening of Music..Marilyn Maye & Nicolas King at The Wick Theatre