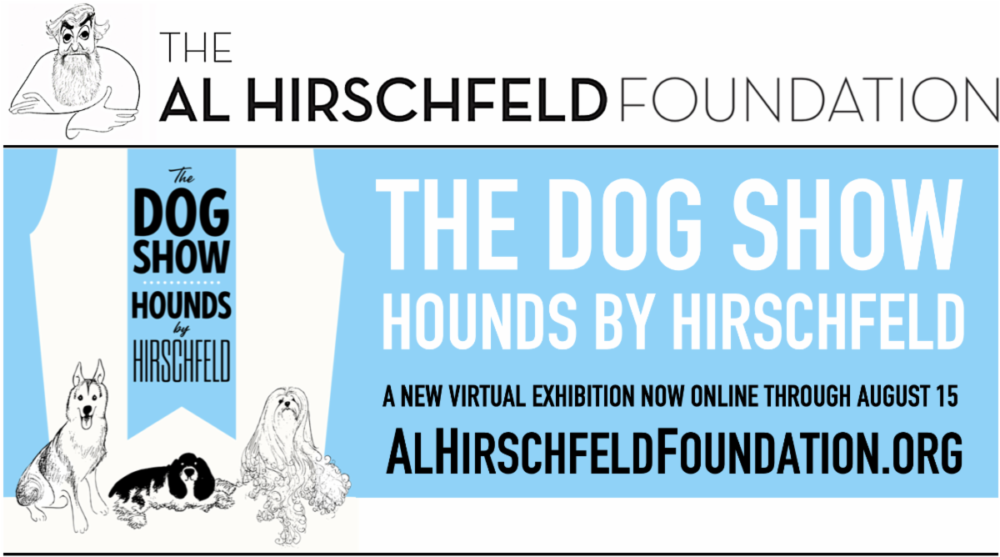 Best known for his charcuteries of Broadway shows, the Al Hirschfeld Foundation presents its latest online exhibition, “The Dog Show: Hounds by Hirschfeld.” Now live at AlHirschfeldFoundation.org/exhibitions through August 15, the exhibition features drawings of dogs by the artists between 1924-2001.  Featuring some of the most famous dogs in 20th century media – and some not-so-famous dogs who were well-loved by their humans. Canines take center stage in this exhibition including the artists’ reflections of The Thin Man, ‘Frasier,” “Lassie,” The Wiz, Annie, Gypsy, The Will Rogers Follies and more. Dogs appear in drawings in nearly every category of the artists’ work; theatre, film, television, music, and literature, as well as politics, private commissions, and Hirschfeld’s earliest lithographs. The dogs seen in this show have been sorted by breed, just as they do in the best dog shows. There are breeds from each of the seven American Kennel Club groups represented: Sporting, Working, Terrier, Hound, Toy, Herding, and Non-Sporting. The exhibition is curated by Katherine Eastman, Archives Manager of The Al Hirschfeld Foundation.  “Westminster may be over, but this dog show is ready to begin,” says Eastman. “For this exhibition, we’ve searched through the Hirschfeld archive for images of dogs of every size and shape. You’ll learn some fun facts about different breeds.  Maybe you’ll even fall in love with a breed and start looking for your next best friend.” Go behind the lines of Hirschfeld’s art with “The Hirschfeld Century Podcast,” nominated as “Best NYC podcast” by the 2020 Apple Awards.  A special episode focusing on “The Dog Show: Hounds by Hirschfeld” will be available starting July 19, 2021 from AlHirschfeldFoundation.org/podcasts, iTunes and other popular podcast sites.

Katherine Eastman is the Archives Manager of The Al Hirschfeld Foundation. On her days off, Eastman practices as a Certified Professional Dog Trainer. She brings her two Cavalier King Charles Spaniels, Chandler and Bennett to work every day. You can follow their adventures on Instagram @KatherineAndCavaliers. The Al Hirschfeld Foundation is waiting for her to train them to sniff out NINAs.

The mission of the Al Hirschfeld Foundation is to promote interest in the theater and visual arts by supporting non-profit museums, libraries, theaters and similar cultural institutions. The Foundation fulfills its mission through grants and exhibitions of Hirschfeld’s art . The Foundation maintains an extensive collection of Hirschfeld artworks and lends and/or donates pieces to institutions all over the world. Another primary mission is arts education, which the Foundation does primarily with the Hirschfeld Arts Curriculum. Created in conjunction with the New York City Board of Education, The Hirschfeld Arts Curriculum is an innovative visual/performing arts education program based on Hirschfeld’s art to engage students K through 12 in a variety of arts activities. Our programs encourage writing, reading, researching, observing, movement and performance to learn about the arts, its history, and the opportunities for education and employment in the arts field. The web based Al Hirschfeld curriculum is easy to use, and is intended to be a free resource for teachers and students. www.AlHirschfeldFoundation.org