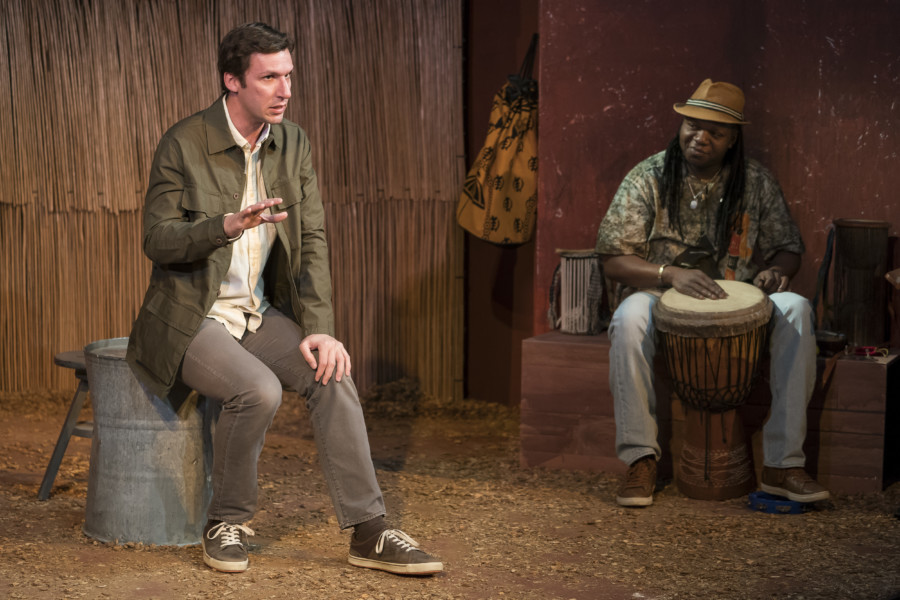 The Dogs of Rwanda: a Lesson in Forgiveness

The Dogs of Rwanda: a Lesson in Forgiveness 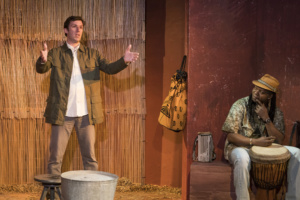 “And he tells me forgiveness can’t just be passed between one another. It’s this big rock we carry, he says. It’s all the pain and hurt someone has given us that we don’t know how to put down. And he tells me when we forgive someone, we’re not absolving them. No. We’re finally giving them that rock. We’re finally letting go of that pain.”  Sean Christopher Lewis, Dogs of Rwanda 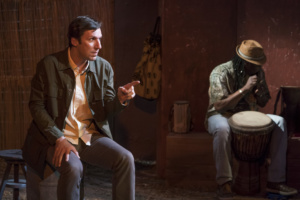 The two-person show, Dogs of Rwanda, by Sean Christopher Lewis at Urban Stages is about so many ways of forgiving and how the things we do not say have the most impact. This moving tale is performed by Dan Hodges with original music and drumming by Abou Lion Diarra. Directed with sensitivity and depth by Francis Hill and Peter Napaolitano, you are sure to be riveted. If you have not read the playbill, you would swear that Mr. Hodges is the playwright and the man whom this nightmare and moment in time happened to. We learn right off the bat that David has written a book about his time in Rwanda, and that he has received a letter from a man named “God’s Blessing “. The note states, “There are untruths here.” As the “untruths” are revealed, we learn that 20 years ago, when David was 16, he was a missionary in Africa. He volunteered to get closer to a fellow student, Mary. When he goes back to Rwanda, he meets an old woman who plays off the tourists’ emotions by showing the atrocities of the 100-day, 1994 genocide called “the Bad Time”. What she doesn’t know is David was there when the Hutu slaughtered 800,000 members of the Tutsi tribe. While washing laundry with Mary, the dead bodies started to fill the river. David and Mary were waiting to find out what had happened, when they met “God’s Blessing “, who was around their same age. They followed him into the woods and learned more than they ever wanted to know. As the past and the present collide, there ends up being no right or wrong, but how one’s consciousness sees the events. Where David thought by omitting facts out of his book would help “God’s Blessing “, in reality, “God’s Blessing ” felt it had damned him. 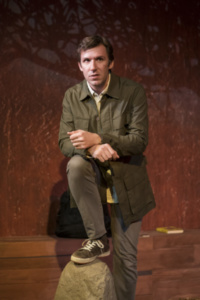 Hodges is masterful in his portrayal, and we believe and follow every word of his story. He breaks our hearts, as his was broken, and allows us to see both sides of the picture and judge for ourselves. 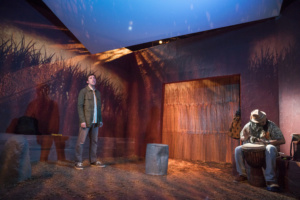 The set by Frank J. Oliva, lighting by John Salutz and projection design by Ryan Belock is simple but well done for the small and intimate space.

Lewis’ words cut to the bone as he shows us how to forgive and let go of the pain that binds. He captures our emotions and, dare I say, this is one of the best plays I have seen this year.

I highly recommend this satisfying play that opens conversations and sets us free.