The Dogs Take Over Shubert Alley Tomorrow For Broadway Barks

The Dogs Take Over Shubert Alley Tomorrow For Broadway Barks 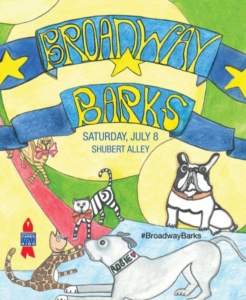 This year Bernadette Peters has established Broadway Barks’ Mary Tyler Moore Award, in honor of her late friend and Broadway Barks co-founder. The inaugural honor will be given to French photographer and animal rights advocate Sophie Gamand at the 19th annual event July 8 at Shubert Alley. Peters and Moore launched Broadway Barks, produced by Broadway Cares/Equity Fights AIDS, in 1999. Moore died January 25 this year at the age of 80 following complications resulting from her long battle with diabetes.

The new award will be given out each year to an individual or group that has advocated for the well-being of homeless animals and has encouraged others to do the same. Since 2010, Gamand has traveled the United States to photograph shelter animals and help them find permanent homes. Her photography series include Wet Dog and Flower Power, Pit Bulls of the Revolution.

Suzanna BowlingJanuary 18, 2023
Read More
Scroll for more
Tap
5 Tips for Hiring the Best Limousine Service for Your Prom or Bachelorette Party
Casting and Seminar On New Musicals for TRU’s How To Write a Musical