The Dork Knight Lives Within Us All

The Dork Knight Lives Within Us All 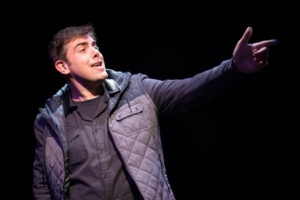 Actor Jason O’Connell spent too much time (according to him) in his bathroom learning to talk like Michael Keaton as Batman or becoming Jack Nicholson as The Joker, by stretching his face and perfecting that laugh. His entire life revolved around these characters and how the girls he liked accepted them. He was obsessed with Batman and still is. “Batman is the greatest superhero because he’s the most human. He’s totally flawed, he doesn’t have any powers, and there’s something really inspiring in that. He’s just a child who went through dark times, and he chose to transform himself.” O’Connell has seen all  the film sand after seeing The Dork Knight, you will feel as if you have seen them too.

Batman played a significant role in O’Connell’s life. The caped crusader inspired him to pursue acting, find courage and taught him life lessons. “I realized there were all these connections between the films and my life. Batman was orphaned, and relied on the guidance of trusty butler Alfred.” O’Connell’s father left early and then basically abandoned him. His grandfather, showed him what a man should be and was there for him.

O’Connell got his start doing stand-up and impressions at Huntington’s East Side Comedy Club. This is the venue (now closed) that helped launch the careers of Eddie Murphy, Rosie O’Donnell and Judd Apatow. He went on to Hofstra University, discovered Shakespeare and has been working as an actor ever since. He was featured in last year’s Off-Broadway smash Sense & Sensibility.

The Dork Knight is a funny and touching 90-minute show, that is heartbreakingly profound as it shows us just who Jason O’Connell is. From this show I gained a respect for Mr. O’Connell, both as a storyteller and a actor. When he becomes Heath Ledger as The Joker, I longed to see O’Connell play some  darker roles as he scared me in a good way with his performance. O’Connell is one terrific actor and this is one terrific show.

The Dork Knight is a funny and touching 90-minute show playing at the Abingdon Theatre through Jan. 29th.