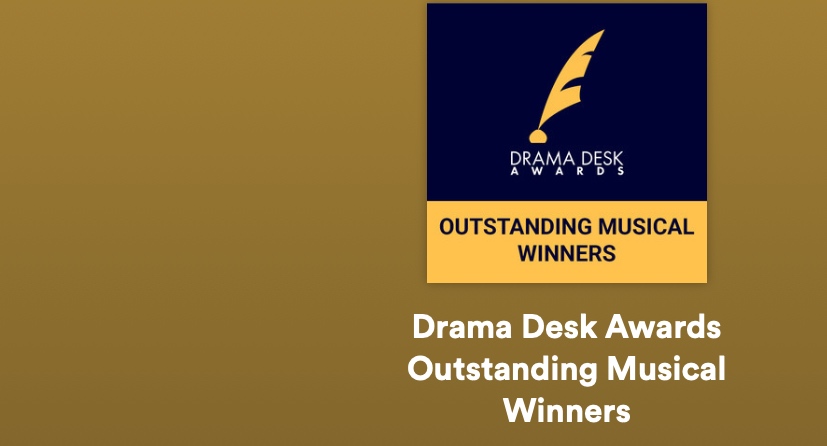 In celebration of its 64th awards ceremony, the Drama Desk Awards has released a Spotify playlist of each year’s winner for Outstanding Musical since the award was established 44 years, ago in 1975.

The Drama Desk Awards Outstanding Musical Winners playlist can be heard with a standard Spotify membership on a smartphone, tablet or computer. Brief samples of each song can be heard on the playlist without a membership through any internet browser. Songs include “Wait for It” (Hamilton), “Electricity” (Billy Elliot), “Confrontation” (Les Misérables) and many more musical theater hits. The playlist is comprised of 42 songs, totaling nearly three hours of listening.

“Welcome to the Rock” (Come From Away)

“Wait for it” (Hamilton)

“Memphis Lives in Me” (Memphis)

“The Bitch of Living” (Spring Awakening)

“As We Stumble Along” (The Drowsy Chaperone)

“The Song that Goes Like This” (Monty Python’s Spamalot)

“What is this Feeling?” (Wicked)

“All the Wasted Time” (Parade)

“The Oldest Profession” (The Life)

“I Got Rhythm” (Crazy for You)

“You’re Nothing Without Me” (City of Angels)

“No one is Alone” (Into the Woods)

“The Writing on the Wall” (The Mystery of Edwin Drood)

“Move On” (Sunday in the Park with George)

Note: No Outstanding Musical award was given in 1985 and although Shuffle Along was awarded in 2016, no cast recording was ever produced. All other years from 1975 are included.

All other years from 1975 are included. The 64th Annual Drama Desk Awards, hosted by Michael Urie, will take place on Sunday, June 2, 2019, at 8:00 PM at The Town Hall in Manhattan. Matt Britten, Broadway Brands CEO, will serve as executive producer and Joey Parnes Productions will produce the ceremony, as it has since 2012. The show will be written by Bill Rosenfield (46 Beacon, True Fans, Sunshine and Shadow), returning for his seventh year; directed by Mark Waldrop (Not That Jewish, Howard Crabtree’s When Pigs Fly, Bea Arthur on Broadway: Just Between Friends), marking his fourth year; and music-directed by Dan Lipton (The Band’s Visit, The Last Ship), making his fifth appearance.

The mission of the Drama Desk is to recognize outstanding achievement in New York theater and encourage discussion of issues significant to theater professionals. The organization accomplishes these goals by bestowing annual awards in more than 30 categories of theater arts and crafts, hosting the awards celebration, and presenting educational forums and panel discussions on theater topics. The Drama Desk was founded in 1949 by New York Times arts reporter Sam Zolotow, Edith Oliver of The New Yorker, and New York Post critic Vernon Rice, among others. Six years later, after Rice’s untimely death, the organization initiated an award in his honor for outstanding achievement Off-Broadway. Subsequently expanded and renamed the Drama Desk Awards, they now recognize accomplishments on Broadway, Off-Broadway, and Off-Off Broadway.

About Broadway Brands Based in the heart of Times Square, Broadway Brands (www.broadwaybrands.com)is a theater media conglomerate that seeks to build creative, informative, and inspiring products for a variety of audiences on Broadway and beyond. The company made its debut in 2015 with the launch of Broadway Briefing, and recently launched Broadway News, with more brands on the way.  Broadway Briefing (www.broadwaybriefing.com) is a fun, fast (and free) must-read morning newsletter for theater professionals. Broadway News (www.broadway.news) is the new home for original theater journalism from editor-in-chief Caitlin Huston, with reviews by Charles Isherwood and Elizabeth Bradley, and featuring contributions from experienced theater journalists including Jeremy Gerard, Gordon Cox, Jan Simpson, and David Cote.  Broadway Brands is building a community of entertainment entrepreneurs, with a passion for taking show business seriously. It celebrates the history of the industry and is even more excited for its future.