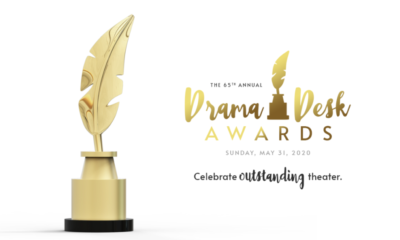 The Drama Desk organization announced today that the 65th Annual Drama Desk Awards, which celebrate outstanding theater on Broadway, Off-Broadway, and Off-Off-Broadway, will adopt a revised season end date of March 11, and move forward with the release of nominations on April 21, and online announcement of awards on May 31. (Dates remain subject to change as events unfold in New York.

“New York theater is caught in a moment of exceptional uncertainty. In the face of this, the mission of the Drama Desk – recognizing the thousands of artists and craftspeople who make up our community – has never been more urgent. We are committed to honoring the outstanding work of this season as best we can, with safety the highest priority,” Charles Wright and David Barbour, Drama Desk Co-Presidents, said.

Additional details on the awards announcement will be released in the weeks ahead.

The Obie Awards Go Online. The Money Saved Goes to Artists. The Obie will go virtual this year, forced online by the coronavirus pandemic. The in-person ceremony had been scheduled for May 18; the date for the virtual ceremony has not been determined, but the hope is that it will be at around the same time.

The Lucille Lortel Awards, will also hold a virtual ceremony.