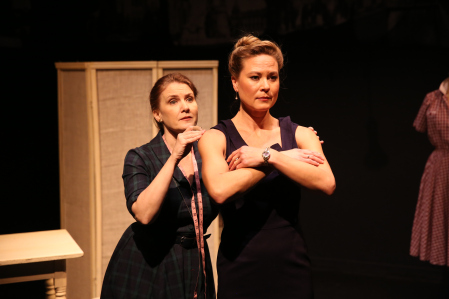 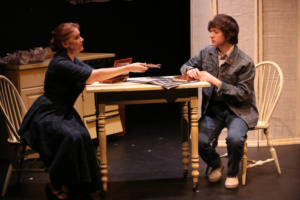 Sarah Levine Simon and Mihai Grunfeld’s The Dressmaker’s Secret, getting its world premiere at 59E59 Theatres, is obviously a personal piece direct from the heart and most definitely from a deeply felt memory. Based on Gunfeld’s novel, ‘The Dressmaker’s Son, the play is an expansive story filled with extensive details of life in 1944 post-World War 2 communist Romania. Etched in the particulars of survival, The Dressmaker’s Secret is not just a singular tale of one woman’s secret but numerous other secrets as well. It seems everyone in this four character soap opera has a deep dark secret wrapped up and buried in war-time intrigue and politics. And here lies the problem. Either this is going to be a story about one secret, which as it is written now, it is not, or possibly, it should revolve around what the book referred to, a mother and her son. 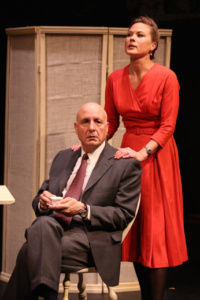 The story is compelling in its simplicity but in the telling of it, has become convoluted and overly complex. It is understandable that Gunfeld has a deep intrinsic connection to the story, but the details are held too closely, and treated like precious items, just like the mementos given from mother to son in this touching story. Overly fleshed out in a realistic style and approach, the day-to-day particulars muddle the dramatic tension. Directed by Roger Hendricks Simon, the meals and the beverages, the cigarettes and the desserts, take up too much important space and time in this overly long and messy production.  The design of the production (scenic and lighting design: Stephen C. Jones) doesn’t help with the action, as it is cluttered and unfocused with too many setups, rearrangements, and knickknacks. We become impatient for these fine actors, who are working so hard to flesh out these poor souls, to stop moving around so much and deliver us to the real emotional core of the secret and the scenario.

The story could have been whittled down to five or so more straightforward scenes that dealt with the interlocking drama. But we become lost in the cafes and unrealistic apartments, where the pacing and intentions don’t register as true and real. People don’t move around a cafe table when conversing over delicate subject matters, especially when they talk about being ‘watched’. They engage and speak to each other, softly and directly. If a play is going to attempt realism, any step outside of that rings too loudly as false. 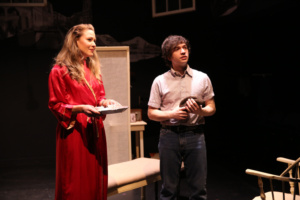 The actors do their best reaching into these tortured souls in an attempt to create believable characters that are trying to deal with the left over trauma of twenty-year-old secrets. Marla (Tracy Sallows) is the dressmaker and mother to young Robi (Bryan Burton). The secret she carries with her also encompasses Irma (Caralyn Kozlowski), her once best friend, and Irma’s brother, Robert (Robert S. Gregory). It’s not that complicated, but the scope of the director and playwright casts too great a net. Subplots revolving around Communists, Nazis, Jewish Ghettos and the holocaust are all intertwined; fascinating details for sure, and made me want to read more about the history of Romania post WW2, but combined with the unfocused structure of the play, the factual details of this specific time period doesn’t do the play’s dynamic energy any favors.

The play is called The Dressmaker’s Secret, which is singular. Had they focused themselves on one person’s dramatic arch (as the title of the book implies), and let the others revolve around that one perspective maybe this piece would have had more focus and a greater impact. The pain and suffering is there, especially within the mother/son dynamic, but this play is too widespread. So dramaturge, Eddie Lew, tighten this piece up, and slice this thing down to something more straightforward and to the point. Get rid of the coffee and tea breaks, the dinners and the desserts, the numerous locales, the window frames, and especially all those old photos of Romania on the walls. There is a compelling beautiful story lost somewhere in this theatre, and it should be heard. And put some thread in that sewing machine if you want us to believe in the dressmaker, her son, and her secret.   For more go to frontmezzjunkies.com

Suzanna BowlingMay 12, 2022
Read More
Scroll for more
Tap
Meet Heartthrob Juan Pablo Di Pace A Late Valentine’s Day Gift At Feinstein’s/54 Below
Good Samaritans: Performance Art Versus Theater, Or Are They One and the Same?