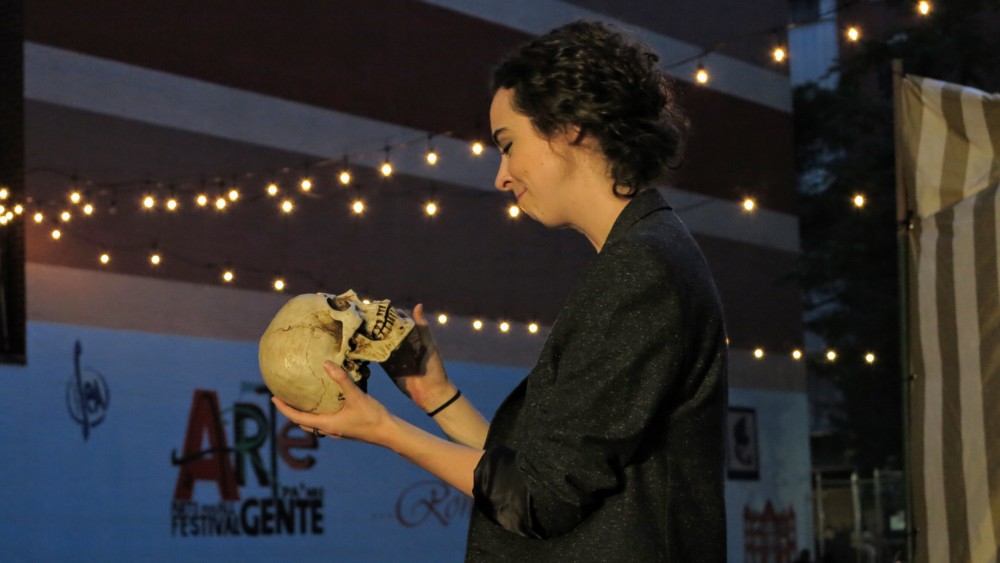 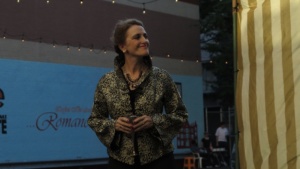 In an age when daily news in America is full of mystery, suspense and drama, Shakespeare’s Hamlet is a reminder of the timelessness of the playwright’s work. The Drilling Company’s Shakespeare in the Parking Lot adaptation of the play expertly brings it to a modern and familiar American setting and ethos. The production makes one of Shakespeare’s most complicated stories not only accessible and entertaining, but also relevant to an age when stories of political intrigue, class division and societal change dominate American media and thought. 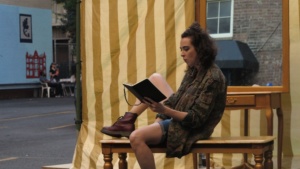 The titular character is played by actor Jane Bradley, who owns the royal dignity of the Hamlet, despite appearing  younger than the average male actor who plays the prince. Her intense, thoughtful gaze and mature posture lend her an inherent nobility, whether she is wearing a formal black dress or casual red Doc Martens with a messy hipster bun. Bradley’s Hamlet hones in on the character as not just emotionally wrought because of life circumstance, but as an actualized young person of deep intelligence and passion. 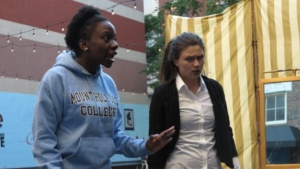 This is made clear with specific everyday costumes and contemporary gestures, such as when Hamlet is dressed as a Brooklyn intellectual while her school friends, Rosencrantz and Guildenstern (Aly Talley Byatt and Lulu Fairclough-Stewarts), are blond Upper East Side 20-somethings who look flown in from the Hamptons. However, Hamlet clearly loves her old pals and rushes to hug them; the friends’ childlike connection is reminiscent of young people who are bound by social class, despite their differences with – or intentions toward – each other. 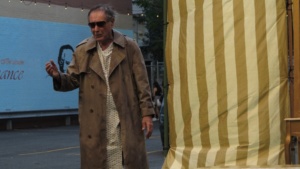 Scenes like this are partly why this adaptation is especially apt to today’s America. It’s not hard to imagine power players in designer suits seeking a throne at any cost and even using their children to do so, such as when Hamlet’s uncle assigns her two friends with the task of spying on her. Hamlet’s style and attitude, combined with her position as future ruler, might further feel timely in today’s transitional age, when many of the current crop of political leaders face immense scandal or are being aged out of their institutions, while a younger resistance stands ready to fight for ascension. Hamilet’s frustration and the clever machinations she herself must deploy to regain power, and the emotional roller coaster that she endures as a result, might feel familiar to much of the audience. 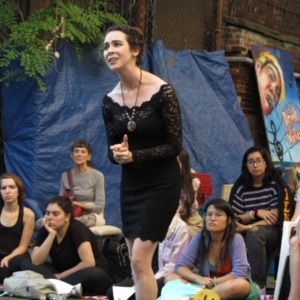 Some of the twists in Hamlet’s supposed love story (it’s complicated) with the innocent Ophelia (a perfectly cast Gracie Winchester) are also relatably light-hearted, as they include your average nosy and hypocritical big brother and the kind of disapproving Mom who reads her daughter’s mail (Elowyn Castle as Polonia, a female version of Polonius). The interaction between the young and old in these scenes, along with the use of the actors’ body language and space, renders this complicated, and possibly one-sided, love story easier to comprehend and keep track of. 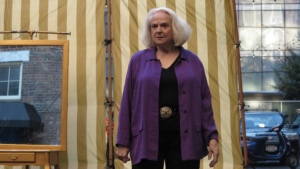 The play’s ghost and love stories further provide some up-to-date entertainment. The subject matter might be dark, but when Hamilet’s father’s spirit (Bill Green) creepily walks by in a hospital robe and Dad hiking sandals (with socks!), as her pal Horatio (Ayo Oneke Cummings) stands there in a college sweatshirt and jeans, the scene seems culled from popular horror movies of our time, especially considering that so many of the play’s  characters – spoiler alert – will meet a tragic fate. 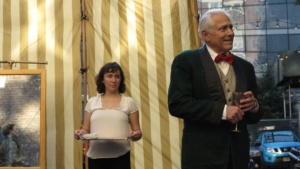 The overall accessibility to this production of “Hamlet” make for an entertaining show, even for those who find it difficult to keep track of all of Shakespeare’s poetic flourishes and complicated plot points. When contemporary theater is as expertly done as it is here, there really isn’t a need to. 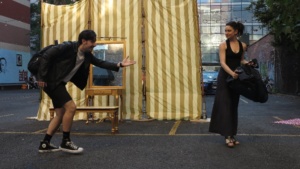 The Drilling Company’s Hamlet is running from Thursday to Saturday (July 26 to July 28) at 6:30 PM in the Clemente Soto Velez Cultural Center parking lot at 114 Norfolk Street.