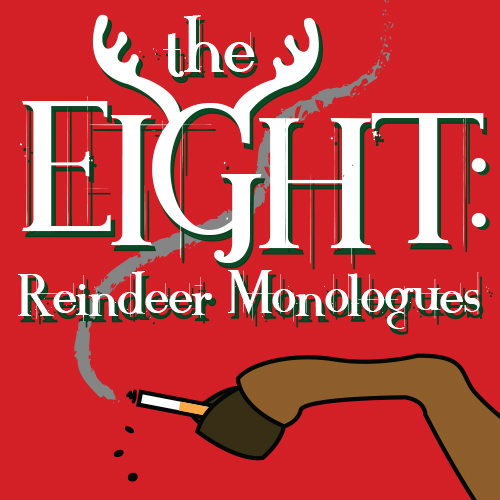 Jeff Goode’s The Eight Reindeer Monologues, is playing for a limited engagement Off-Broadway at St. Luke’s Theater. The production directed by Andrew Benvenuti and produced by Sara Laursen and The Drama Club NYC, a newly formed arts organization, does not come off well. According to  Benvenuti; “This is a play for our current times. It’s quite dark but side-splittingly funny, layered, and emotionally involving. It makes audiences laugh and then gives them pause. There will be plenty to talk about on your way home!” Unfortunately neither my guest, nor I found this show any of this.

What we did find was a badly acted, foul-mouthed, crass show that made me wish I was sitting near a fire hearing Christmas carols.

Written in 1994 the show speaks out about several political issues using Santa and Mrs. Claus, as sexually harassing, alcoholic and deplorable people.

An incident has happened between Santa and one of his reindeer, Vixen. The only witness Rudolph the Red-Nosed Reindeer is in a catatonic state in a padded cell, and the remaining seven reindeer are split between defending their “deer” friend or the jolly old St. Nick accusing him of perpetrating “holly jolly sex crimes”.

The best of the reindeer’ Dasher (Cameron A. Tubbs) is a military type. We really got the feeling of a Patton type deer.

Hollywood (Jason Garton) who is also “Prancer talks about the movie, ‘Prancer,’ and how he is not real happy about ‘Prancer 2,'” He is a flamboyant movie star who is into the whole political show business scene.

Blitzen (Molly Megan Maynard) is a very strong-willed feminist who is passionate about her work and the rest of the reindeer. She wants them to be treated equally.

Comet (Josh Bowen), idolizes Saint Nick for keeping him and other wayward, drug addicted reindeer off the streets.

Donner (Rasik Ohal), is in deep emotional pain for allowing Santa to abuse his son Rudolph.

and finally what is suppose to be a sexy Vixen ( Sarah Spring), accuses him of rape.

The set by Luciany German, lighting by Ginaury Vasquez and makeup design is by Sara Laursen, was well done. I loved the little reindeer paws.

The direction misguided as the actors all seemed unseasoned.