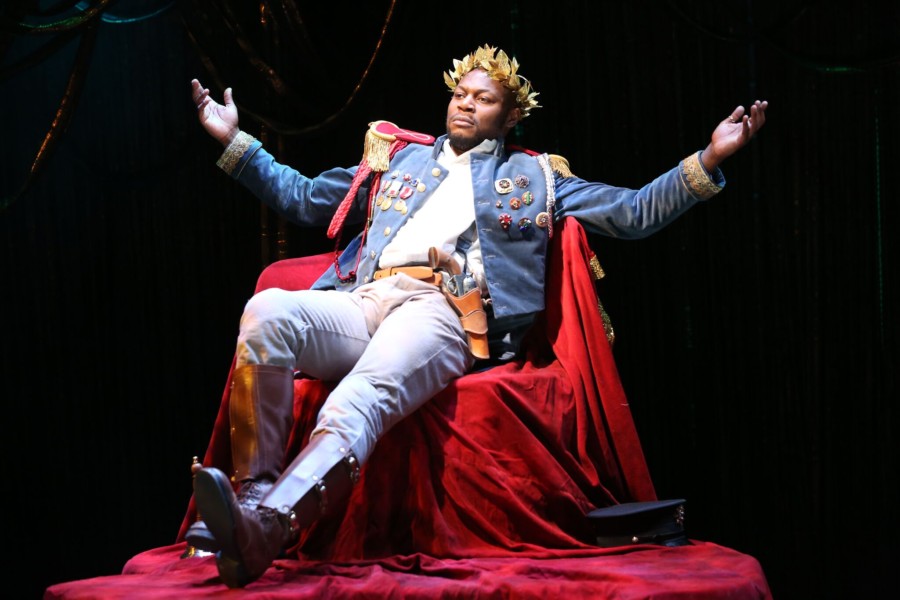 The Emperor Jones Evil Lurks No Matter The Color

The Emperor Jones Evil Lurks No Matter The Color 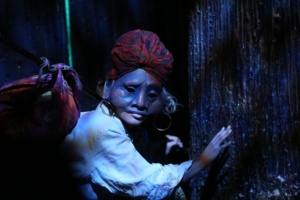 Eugene O’Neill, 1920 play The Emperor Jones now being performing at The Irish Rep uses several mediums to tell it’s story. At the helm is British actor Obi Abili as Brutus Jones. Having manipulated the locals this smug, boastful murder is soon to get his comeuppance. Ruthless and soulless, Jones has used the natives’superstitions against them, claiming only a silver bullet can kill him. The natives that night use his past and words against him. 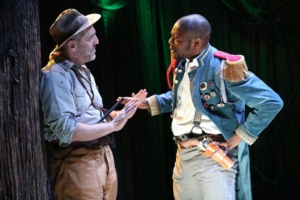 As the show starts off as an old women (Angel Moore) is sneaking off from the palace. A greedy Cockney trader named Smithers (Andy Murray) who has helped Jones during his corrupt dictatorship, embezzle money. However Smithers sees Jones downfall. Jones has been cruel victimizing his people. As the drums sound the voodoo ritual of the people asking for spiritual assistance Jones flees through the jungle. The jungle comes alive terrifying Jones with the spirits from the past, until he uses his silver bullet on a crocodile (Reggie Talley) and can be shot. 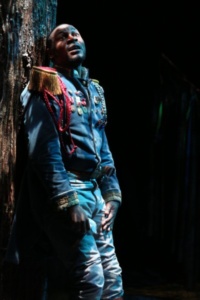 Abili is a force to be reckoned with, I just wish I understood him through the heavy dialect. His presence and acting is masterful and powerful and extremely psychopathic. As he waves the gun around, I was actually cringing that it might go off. As he whipped the thrown, I shuddered to think of how that related to a person and oh how deep the rage inside was buried. 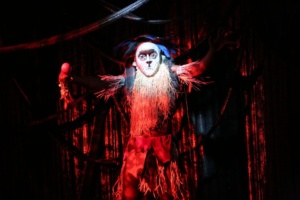 The jungle set design by Charlie Corcoran, military costume designs by Antonia Ford-Roberts and Whitney Locher, fabulously scary puppet and mask design by Bob Flabagan, haunting lighting design by Brian Nason and superb sound and music by Ryan Rumery and M. Florian Staab are all first rate and as much a part of this production as the acting. Also in the ensamble were William Bellamy and Carl Hendrick Louis all who performed brillantly. 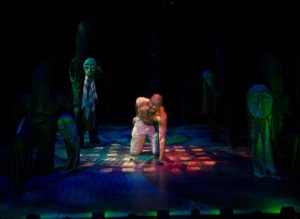 The direction by Ciaran O’Reilly is chilling and Barry McNabb, shines as his forest and witch doctor (Sinclair Mitchell), come springing to life. 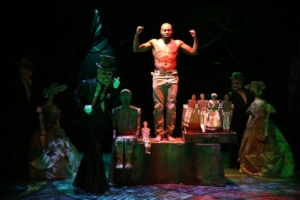 In the end Jones’s misdeeds outshine his racial memories. He has become the terrorist and is doomed to be taken down.