The Evolution of Mann Where Marriage is Sought After Like Prey 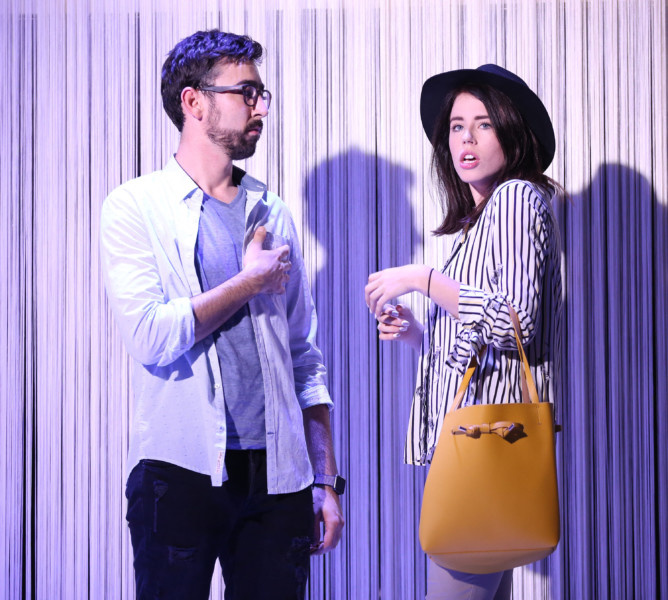 The Evolution of Mann Where Marriage is Sought After Like Prey

If you don’t mind fluff  The Evolution of Mann is just right for you. The cast is as talented as can be, the direction by Joe Barros, smart, the music tuneful, but I seriously wondered who is this show audience?

Henry Mann (Max Crumm) is a 32-year-old writer, who desperately wants to be married. His fiancée Sheila (Allie Trimm), dumped him over a year ago and since then he has had to attend  twelve weddings and he is over it. He is pushed to the edge when Shelia invites him to her wedding. It seems she traded up and is marrying somebody wealthy and much more stable. For the past twelve weddings his date has been Gwen (Leslie Hiatt), his BFF lesbian roommate who is on a break from her wife. Now Henry needs to show up with a trophy date or more importantly a fiancée. In the meantime Gwen want to show her wife that she loves her. Seems Gwen cheated and her wife was none too thrilled. 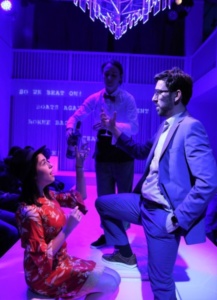 Henry is desperate, broke and not exactly the most wonderful human being. He is so insecure that he keeps repeating “You’re good looking. You’re smart. Women love you . . . YOU DE MAAAANNNNN!” One his journey he meets and has one date with the bi-sexual Tamar, who dumps him for the married man she is seeing. Makes a real connection with Christine, but can not get over her uni-brow so when Christine and he connect again, Henry does what Tamar did to him and dumps her, despite his mothers advice. Ironically all these women are played by the fabulous multi-talented Ms. Trimm. 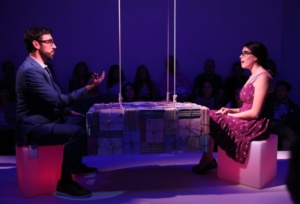 In the end like he meets the yoga instructor, who he eyes from his window to the apartment across from his. 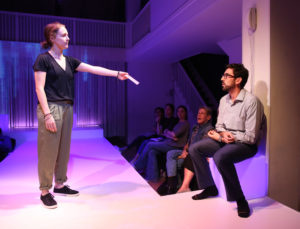 Crumm embodies Henry with warmth, charisma, a dorkiness and despite the character’s flaws we root for him. He brings more to the character than the script does. Ms. Trimm, is a wonder bringing a distinctive life to each of the women she plays. We know who each of these people are.  Ms. Hiatt feels like a young Mary Stuart Masterson from “Some Kind of Wonderful”. She also plays some of the men in the show. I wish for these truly talented performers a more emotionally connected show. 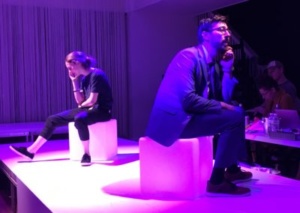 Douglas J. Cohen (music and lyrics) and Dan Elish (book and lyrics, based on his 2005 novel Nine Wives) is sweet, but lacks depth. The songs are nice, but I didn’t long to buy the album. Nothing really gets into the emotionality of what all of this feels like except maybe “It’s Only A First Date,” but a better song with the same sentiment is “Before It’s Over” from Dogfight.

The direction by Joe Barros, utilized this small and rather limiting space well. The set design by Libby Stadstad, also helps to expand the space with trap doors, cubes that light up which highlight the projections by Nathan Scheuer. Siena Zoë Allen delightful costumes are wonderfully velcro’d for quick changes. Finishing off the look is the subtle lighting by Chris Steckel and the sound design by Ellen Fitton. This was all superbly done well.

The musical music direction by Eric Svejcar made the orchestra which consisted of Tomoya Aomori on cello, Darren Lucas on guitar, and Vadim Feichtner sound lush and full bodied.

It’s not that I didn’t like this show, but I wish they had shown real emotions that just didn’t lie on the surface. Life is messy and it is much more interesting that way.