The Fabulous Lillias White Brings Christmas to The Green Room 42 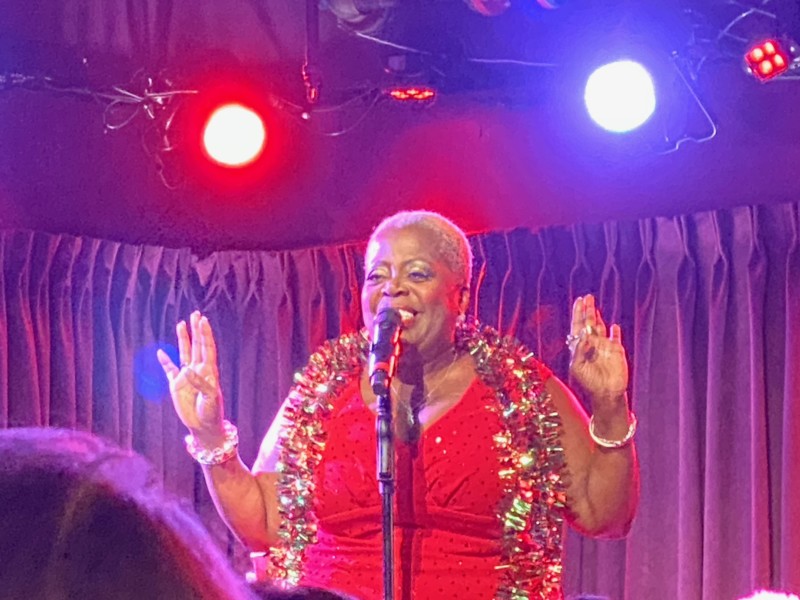 The Fabulous Lillias White Brings Christmas to The Green Room 42

The Sound of Music‘s “My Favorite Things,”, got a jazz and blues rendition. Ottis Redding’s “Merry Christmas Baby” was sexy and heartfelt, while Louis Armstrong & Benny Carter’s “Christmas Night In Harlem” was full of perfect scats. The Shirelles’ “Blue Holiday”embraced the longing of a heart. “Jingle Bells” gave way to the joy of the season, as Big Maybelle’s “I’m Getting ’Long Alright” proved she was over that man or any man. Marilyn and Alan Bergman “A Christmas Love Song” embraced the feeling of the love of the holiday.

Bringing joy and a voice that caresses each note, Lillias brought her Jamican roots full circle with a historical version of “Let it Snow”, “Christmas Night In Harlem”, Making the rounds with “Santa Baby” brought the audience to a swoon. Hoagy Carmichael’s”My Christmas Song For You” let the audience know how Lillias felt. She expressed several times, her gratefulness for her audience.

Directing Lillias, was Will Nunziata, who helped her create a well rounded connected through line of song and patter.

James Sampliner (Legally Blonde, Honeymoon in Vegas), was also the music director for Sam Harris. I am convinced this is the man you want in your corner while doing a cabaret act. He is supportive and sounds like a one man band adding such lush accompaniment that he is a joy to listen to.

Lillias made her Broadway debut in Barnum in 1981. She played Effie in the 1987 revival of Dreamgirls, going on to appear on Broadway in Cats, Carrie, Once on This Island, How to Succeed in Business Without Really Trying, Chicago, and Fela!, for which she received a Tony nomination. For her role as Sonja in Cy Coleman’s The Life, she won the Tony, Drama Desk, and Outer Critics Circle Awards. She also received the AUDELCO Award for the world premiere of Regina Taylor’s Crowns. Lillias won an Emmy Award for her part on “Sesame Street” (Lillian Edwards).

On film, Lillias can be seen in Pieces of April (directed by Peter Hedges, Game Six (with Michael Keaton), Nasty Baby, Then She Found Me, How the Grinch Stole Christmas, and she can currently be seen on Baz Luhrmann’s “The Get Down” on Netflix. She is also credited for her vocal performance as the lead muse in Disney’s animated movie Hercules.

Lillias opened The Green Room 42 on Valentine’s Day in 2017 and returns for the club’s birthday each year.

This is a show not to miss and is sure to put you in the holiday spirit.