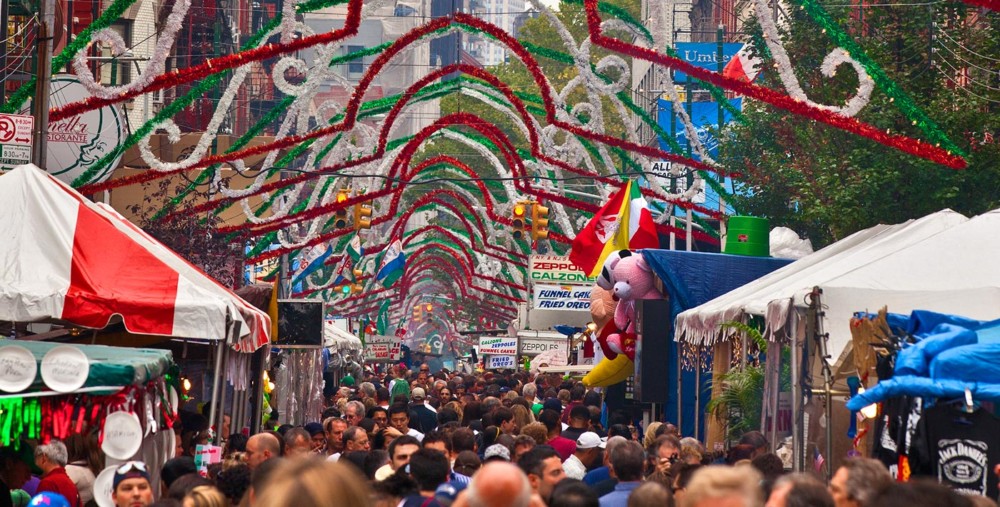 The Feast of San Gennaro Celebrates Its 92nd Anniversary

The Feast of San Gennaro Celebrates Its 92nd Anniversary

Beginning September 13th, The Feast of San Gennaro, celebrates its 92nd anniversary hosting a variety of activities and events throughout its 11-day celebration.

The Feast takes place in the heart of Little Italy, running along Mulberry Street, between Canal Street (on south) and Houston Street (on north). The annual festival presented by Figli di San Gennaro (Children of San Gennaro) is a not-for-profit community organization dedicated to keeping the spirit and faith of the early Italian immigrants alive. The celebration spans over 10 blocks with vendors offering everything from zeppoles to custom made jewelry, entertainment and family friendly activities.

The feast will kick-off with The Blessing of The Stands on September 13th at 6:00 PM. During this event, a Parish Priest parades through the festival blessing all the shops, restaurants, vendors, and merchants to symbol an enjoyable and successful feast. In addition, the Grand Procession parade will take place on September 15th at 2:00 PM lead by Grand Marshall Vic Dibitetto, a Brooklyn-born comedian. Dibitetto, famous for his 2013 “Bread & Milk” snowstorm video, was chosen as the grand Marshall of the Italian feast, a role held by A Bronx Tale actor Chazz Palminteri in 2017.

Two crowd favorites return this year, the 21st Annual Cannoli Eating Competition on September 14th at 2:00 PM and the 3rd Annual Meatball Eating Competition on September 22nd at 1:00 PM. The cannoli contest is hosted by Gianni Russo at the stage intersections of Mott and Grand Streets, this long running contest brings out the best in food competitions with a classic Italian treat. The meatball contest, which made its debut at the festival in 2016, is held in honor of the “unofficial Mayor of Little Italy,” Johnny “Cha Cha” Ciarcia,

The beloved Feast of San Gennaro, is an annual festival presented by Figli di San Gennaro (Children of San Gennaro), a not-for-profit community organization dedicated to keeping the spirit and faith of the early Italian immigrants alive. The Feast is New York City’s largest and longest running festivals and attracts more than one-million people from around the world each year, to take part in the religious processions, colorful parades, free musical entertainment, and a wide variety of authentic Italian cuisine. The first Feast in New York City took place on September 19, 1926 when newly arrived immigrants from Naples settled in what is now Little Italy in New York City, and decided to continue the tradition they had followed in Italy to celebrate the day in 305 A.D. when Saint Gennaro was martyred for the faith. Since then, the Feast has grown from a one-day street festival to a gala 11-day event.