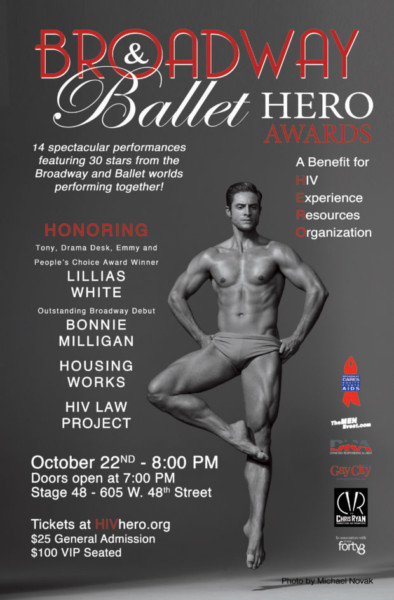 The event is not just about raising much-needed funds for HERO, it also showcases the amazing talents of the New York City Broadway and dance community. The entire evening’s entertainment consists of world premieres of dance pieces set to a wide variety of musical genres. While the artists who perform each year are primarily from the Broadway and ballet worlds, the works they create for the Awards run the gamut of styles from downtown contemporary, to modern, and everything in between. 2018 performances include: Sharon Catherine Brown (Dreamgirlsand Head Over Heels), Ruby Lewis (Paramour), Bonnie Milligan (Head Over Heels), Swedish International Dancer and Opera Star, Oscar Pierrou Linden, Broadway Star Michael Cusumano (An American In Paris, ABT Chicago), ABT Stars, Sean Stewart,Jose Sabastian and Duncan Lyle,Morgan Stinnett (soloist with Connecticut Ballet, member of Ajkun Ballet Company), Michael Appuzo (Paul Taylor Dance Company), Seeley Stephens (Top 50 Finalist American Idol), Evan Lacombe (The Christmas Spectacular at Radio City Music Hall), Luis Villabon (A Chorus Line), Travis Nesbitt (Alter Boys), The Boy Band Project, Opening Number performed and choreographed by Evan Lacombe and the finale number choreographed and performed by Madeline Rodrigue, with dancers and Alumni from Pace University and many more!

We also seek to represent the diversity of our city in terms of the race, ethnicity, and sexuality of the artists who generously share their creative vision each year. Some of the highlights of past events include; Tony Award Winner and Grammy nominated Melba Moore singing a medley from the Broadway Musical Hair with the entire cast of Broadway and Ballet, Tony Award Winner Donna Mckechnie singing “What I did for Love”, ABT Principle Dancer Marcelo Gomes performed “Sinatra Suite”, James Whiteside and Cassandra Trenary performed an original piece, “Wall Flower”, New York City Principle Dancer Stephen Hanna dancing to “If I Only Had a Brain” with vocals by Broadway and Film Star, Michael-Leon Wooley, Attila Joey Csikiand Tobin Del Cuoreperformed a duet by Lar Lubovitch called “Concerto 622,” a legendary piece of choreography that was created during the AIDS epidemic and Garen Scribner (“An American In Paris”) who created and performed a new ballet solo and received the first John Adams HERO Award for best Broadway debut.

Housing Works is a New York City based non-profit fighting the twin crises of AIDS and homelessness. Housing Works also operates the HIV Law Project that provides free legal services to residents of New York City who are living with HIV. The HERO Partnership Award was previously presented to Broadway Cares/Equity Fights AIDS, The Actors Fund, GMHC and The JED Foundation.

Tickets are on sale at www.hivhero.org.  General admission is $30.  VIP Premium Seating will be $100.   Highlight videos from the past four years can be seen at  https://youtu.be/iztNfglqxvs.

Suzanna BowlingMay 27, 2022
Read More
Scroll for more
Tap
Nicholas Belton Sings Maltby and Shire’s If I Sing
He Says: The Kernels of Popcorn Falls Explode Fast and Furiously Funny at the Davenport