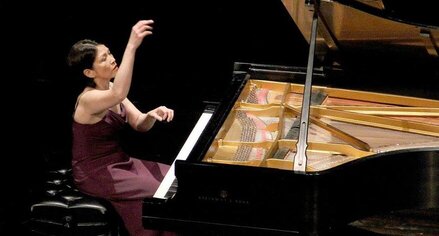 Yesterday a memorial service was held for Father. Alfredo J. Balinong, SJ known too many as Father Freddie. Freddie passed away on June 20, 2021. Born on December 9, 1933. A parish priest to the Church of the Blessed Sacrament located at 152 West 71st Street in Manhattan from 1982 until he retired to the Philippians in 2015. Freddie, 87, had been admitted to the hospital for a number of procedures to address his heart ailments when he developed pneumonia and experienced multiple organ failure.

This beloved priest was a pillar to the Filipino community and will be greatly missed. The Balinong Family, Thelma Reyes M.D, The Baquiran Family and Marya Coburn helped make this day special.

In attendance were Tony nominee Robert Cuccioli and Diane Phelan from Broadway’s School of Rock and King and I, among others. Diane is about to star as Sabella in CollaborAzian’s production of A Gentleman’s Guide to Love and Murder beginning on July 15th – July 22, 202. Proceeds from ticket sales will benefit Stop AAPI Hate, a nonprofit coalition that tracks and responds to incidents of hate, violence, harassment, discrimination, shunning, and bullying against Asian Americans and Pacific Islanders in the United States. Tickets are available now at: http://bit.ly/collaborazian-ggtlm

Cecile Licad is the Philippines’ most celebrated pianist. In 1980 Licad received the Leventritt Award Gold Medal giving her international recognition, that eventually launched a global career. She has been a soloist for 13 orchestras including the Chicago Symphony Orchestra, Los Angeles Philharmonic, Philadelphia Orchestra, the New York Philharmonic and many others. In Europe, she appeared with the London Symphony, London Philharmonic, Bayerisches Rundfunk Orchester, Orchestre de la Suisse Romande and Moscow State Academy Symphony. In Asia, she played with the Hong Kong Philharmonic, New Japan Philharmonic, Tokyo’s NHK Symphony and Philippine Philharmonic. For father Freddie her performance was sacred. Midnight Sonata, Minute Waltz and a Filipino favorite sent Father Freddie to his heavenly reward.