The Flea’s Southern Promises Slavery on Their Own Terms 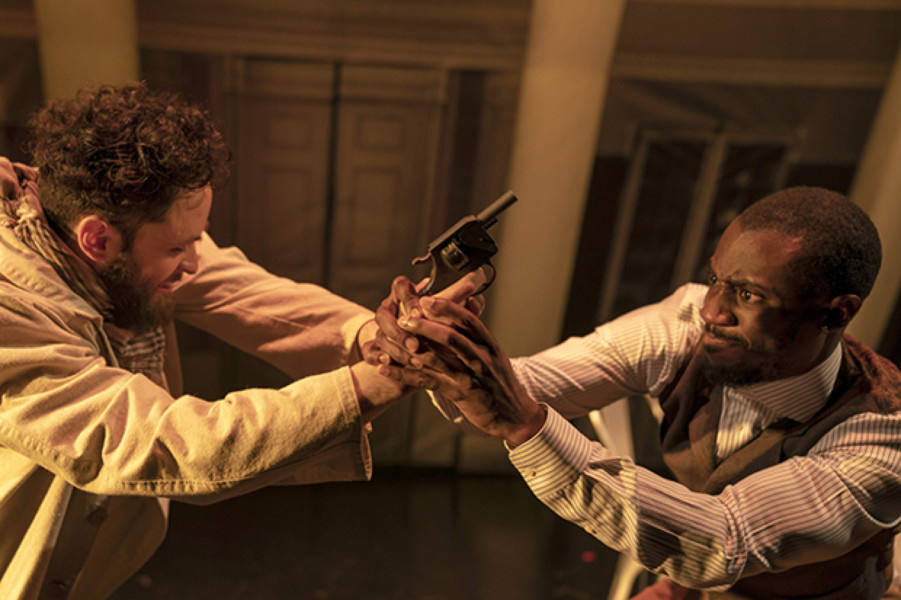 The Flea’s Southern Promises Slavery on Their Own Terms

“People of color in America don’t really have a tradition where we confront and investigate the legacy of slavery on our own terms.” The Bats.

Thomas Bradshaw’s Southern Promises at The Flea Theater we are told is performed by the nonwhite members of The Bats and examines slavery through the story of a plantation owner who, on his deathbed, vows to set his slaves free. Once dead, his wife ignores the request and the plantation reaps the karma.

Set in 1848 Isaiah (Darby Davis), the owner of the plantation is dying and tells his his wife, Elizabeth (Brittany Zaken), to free his slaves. He also tells his favorite slave, Benjamin (Shakur Tolliver). Benjamin shares the news with his wife, Charlotte (Yvonne Jessica Pruitt) who now longs to have a child. When Isaiah dies, Elizabeth tells Benjamin her husband was not in his right mind and has him drop his pants and attend to her needs. Isaiah’s brother, David (Jahsiah Rivera), and Elizabeth’s brother, John (normally played by Marcus Jones, but at the performance I attended Lambert Tamin took over the role), an anti-abolitionist minister, come to her rescue and the once non-violent plantation is now a place of whippings.

The Bats and the Niegel Smith the director have altered the script and for the most part the play is better, however the moments of over acting and the plodding staging makes this play dull. With rape, miscegenation, infanticide, lynching and complete human mistreatment this play should have grabbed our attention.

What is smart is Jason Sherwood’s set, a tilted giant photograph of a plantation house that dominates, as lighting designer Jorge Arroyo illuminates the windows to show which part of the house we are in. Oddly Smith and sound designer Fabian Obispo have set each scene to classic rock, in which the actors dance to.

In the end we are told that Benjamin and Charlotte are free, but are they? Is the definition of freedom to become the abusers?