The Flea’s The Invention of Tragedy Confuses the Cats + Dogs 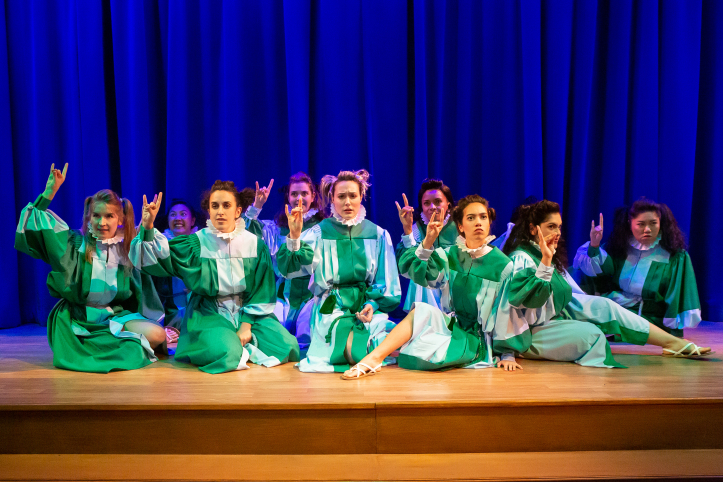 The Flea’s The Invention of Tragedy Confuses the Cats + Dogs

“Hot Damn“. [Laughter] The Narrator, uniquely portrayed with musical dexterity by the compelling Sarah Alice Shull (The Flea’s Not My Monster!) informs us, leads us, instructs us, with a clear force and somewhat monotone musical delivery. This is “the story about the tragedy of the Sandwich Man, with sandwich boards upon which nothing is written“, she tells us guidingly. It’s clear the boards say nothing, which is something, but the press release tells us what the playwright Mac Wellman (The Offending Gesture) is attempting to do. Wellman wants to examine the post-9/11 landscape and America’s general and genial acceptance of all the talking points that propped up the Irag war. Now I must admit that I would never have put that all together on my own, if not for the press release, and although I think a good confusing abstract is not necessarily a bad thing for art and a theatrical presentation, some kind of pathway to engagement is a requirement for a complete success on stage. Just my two cents, but as directed with a detailed precision and curiosity by Meghan Finn (The Tank’s Charleses, Sam’s Tea Shack), the “long and short” of the construct is as bizarre and wacky as the disconnect created. Even with the somewhat entertaining dynamic and the solidly willing and determined synchronized cast members, all from The Bats, the leash of engagement cracks and strains to the (almost) breaking point.

As I sat and contemplated the convoluted creation ramping up before us with a wild and focused energy, I couldn’t help but think of my dear friend who said, when I took him to see Baz Luhrmann’s “Romeo + Juliet” that he thought all of Shakespeare was basically dramatic gibberish. The words and delivery made no sense to him, and the story always seemed to uncomfortably wash over him like a big wave at a pretty but foreign beach. I never really understood that idea, as Shakespeare to me is so full of meaning and poetry, but after watching The Invention of Tragedy, I finally understood his feeling.

The piece, at first, dives head first into the idea of group dynamics, when the whole follows aggressively behind the central talking-head, like a pack of nervous dogs repeating Fox News talking points. They react and demonstrate anger at another just as they are instructed, feeding on a frenzy that others hear as nonsensical noise. That is until the Answerer/Answearer, fantastically portrayed by the eye catching Drita Kabashi (The Tank’s When We Went Electronic) arrives, late but determined to find a place in the lineup. She never really fits in to the space, or the ideas presented don’t seem to sink in under her skin in the same way the others follow suit. The Enforcer/Hare, hilariously played by the elastic determined Susan Ly (Miller Coffman’s Love Is A Bad Neighborhood) is instructed by the voice of narrative god to axe the opposition like some Mean Girls in high school, and through a number of wacky dramatic pauses, 1001 of them, the imaginative wobbly venture dances forward, delving into defiance and rebellion. But “it’s too late“, they have ventured far off “beyond the fear place“, proclaiming their freedom from form is purposeful, meaningful, and very serious, within a solidly silly stance.

“Errrrr“, they say to the unlawfulness of it all. [pause] There is “something wrong with this“, and I can’t help but agree, all the while being kooky and demented enough to keep us tuned in. The Chorus of creatures, featuring members of (naturally) the Bats: Sophia Aranda, Renee Harrison, Mirra Kardonne, Macy Lanceta, Alice Marcondes, Madelyn Rose Robinson, Ana Semedo, and Zoe Zimin, do their duty very well, repeating with just enough of a pause to catch the meaning, shifting solidly from dog to cat without a hiccup. It says a lot about their inventiveness and determination, to play out this piece with complete loyalty to the cause. It flutters forward, giving us an off-off-broadway preferred alternative to the “Cats” movie preview that made us all make faces like the Narrator does when she smells something bad. “I am free” I believe, to some how get the point of it all, to find it amusing and artfully fun, to laugh with pleasure at the ridiculousness of it all, but not be taken in. In this, I’ll remain outside the pack. “Hot Damn“. “Stop saying that“.

Suzanna BowlingJanuary 18, 2023
Read More
Scroll for more
Tap
Theresa Rebeck’s Seared Hasn’t Even Begun Previews and it is Already Extended
He Says: NYTW’s Expands the Cycle with a Crowded “runboyrun” & a Solidly Finished “In Old Age”