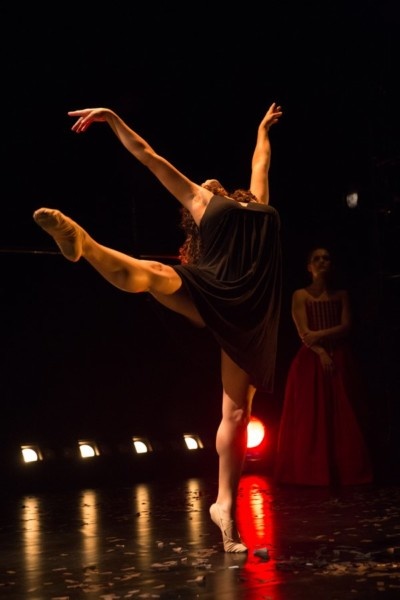 Brock is the contemporary choreographer behind Broadway’s Be More Chill and Public’s Hercules, as well as the Artistic Director of the 12-year-old New York City-based dance company that is a resident company at Theatre Row and Modern Accord Depot in Accord, NY., that bares his name.

The Four Seasons, is a dance theater narrative conceived, directed and choreographed by Brock. This 60-minute show made its world premiere at Joyce SoHo in May 2008.

Set in the not-too-distant future, bugs are rampant, temperatures are burning up the planet, as a frazzled cable weather girl Roz G (the incredible and scene stealing Sarah Bowden), tries to keep her cool. She starts to crack underneath the pressure of having to report rising sea levels and temperatures that are soaring beyond control with a smile. Her fake c’est la vie attitude unravels, as the population blissfuly ignores what she is saying.

We start with spring as bright pastel colors, adagio couplings, bouncy jumps with flowing hands, lead to spins that feature Jane Abbott, Michael Bishop, Chloë Campbell, Kendrick D. Carter, Kassandra Cruz, Kory Geller, David Hochberg, Yukiko Kashiki, Honza Pelichovský, Tracy Shen, Emmy Spaar, and J.P. Viernes change partners and dance. The death of a bird leads to summer. Everyone is hooking up and it seems that it is the summer of love, though not in costumes. Despite the heatwave that is climbing, clothes remain on. As fall enters the dancers are decked in red and gold renaissance costumes as the loss of a child ends the festivities. When Winter descends the dancers finally are stripped to their underwear scribbling messages of farewell. The message is finally hitting home, but is a little too late.

The dancers are all beautiful to watch, as they fill the stage with Brock’s choreography. Limbs reach for the sky, bodies intertwine. For the most part they dance as a group. Brock is bound by his music and instead of bursting forth like a bundle of energy, it is the same old music that seems out of date. I would have liked if Brock had contemporize the piece putting his spin on the sound, which would have freed the movements to be more kinetic, which is where he excels. What is so exciting about Brock’s work is his hand movement blended in with broken lines, that meld into strong arabesques or other extended body work. I would have liked to see more solo’s, duets and trio’s with dancers off stage and coming back on to merge as a group.

The basic scenic and costume design by Dane Laffrey (Tony Award winning revival of Once On This Island), and lighting design by Tony Award-winner Tyler Micoleau (The Band’s Visit) also could have been stronger.

The Four Seasons has a message but I can’t wait to see what Chase does next.

December is Full of Events To Make You Ho Ho Ho
Ken Jennings: First Broadway, Then a Spiritual Connection With The Gospel of John