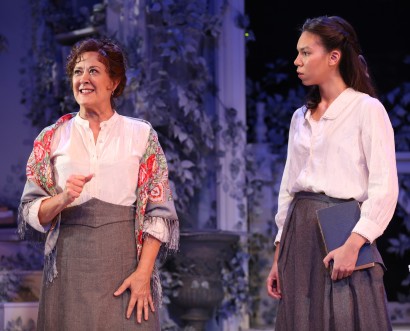 Mrs. Warren’s Profession at Theater 2 (The Kirk Theater) at Theater Row is one of George Bernard Shaw’s most controversial works. It was frowned upon at the time of Shaw’s play for a woman to own and run a business. The Gingold Theatrical Group uses Mr. Shaw’s writing to help promote freedom of speech and creates theater to further the cause of supporting human rights. To Gingold, Shaw was a humanitarian and as such they continue to produce works like Major Barbara and Widower’s Houses.

Taking place in both Surrey and London, England in the year 1912, we find Vivie Warren (Nicole King) and Praed, a good friend of Mrs. Warren on stage talking about how Vivie was raised unconventionally, as a Cambridge University honors graduate in mathematics. She is at the top of her field. Vivie has a burning ambition of being independent with little interest in men or anything else other than her Chancery Lane project, whiskey, a good cigar and a comfortable chair.

Ms. King who has had vast stage experience with various Shakespearian Companies is very good in her role, however, a few times she stumbled through her lines at this performance.  Vivie commands and controls anyone who is in her way, whether it be marriage proposals, a challenge to her career, or how she sees life in general; she is sure about her philosophies and her values. The audience never once doubts her resolve and attitude.

The costumes by Asa Benally, sound design by Frederick Kennedy, lighting by Jamie Roderick and scenic design by Brian Prather all make this a nice, compact play. There is a small cast (6) and not an expansive stage. This gives the actors under direction of David Staller, an intimate atmosphere in which to move about. The opulent garden like setting serves as Mrs. Warren’s home, the gardner residence.

Shaw as is his “MO” with many of his works, explores his character’s; often exposing their weaknesses and giving them a false sense of strength. Here people like Sir George Crofts (Robert Cuccioli was a Tony Award nominee) are shrewd in their dealings as well as hypocritical. Like Crofts, all of Shaw’s characters have a ready answer for the dirty dealings that come out during the show. Even the Reverend has secrets. He buys his sermons.

The only person who is an open book here is the one who is educated, Vivie.  Standing on principal she asks pointed questions like; who her father was and why hasn’t her mother been there for her all of these years?

Mrs. Warren’s Profession, like a Tennessee Williams play’s has more dealings underneath the surface than above it. Vivie and her mother, Kitty Warren (Karen Ziemba a Tony Award winner) are as similar as they are opposites. Where Kitty had to be more street wise to get by, Vivie used her common sense and a more refined approach to getting success. Whereas they are both independent, Kitty is very protective of her daughter. Anyone who tries to get over on Vivie has to deal with her mother. Yet Vivie is too smart for people, she reads them with ease and never gets rattled by what people say or how they act. Being on her own for so long has indeed made her an independent thinker and she is not to be trifled with. Shaw clearly shows the two different sides of this mother/daughter banter.

The two different generations of thought, the two different points of view about each other and the very clear two different up bringing’s. Coming from nothing it was important for Kitty to provide. Vivie, however wanted more personal success, more understanding to life. She shuns people like Crofts, she understood the hypocrisy of the Reverend and dismissed both Praed and the Reverend’s son, Frank.

Shaw can be wordy at times, and Staller keeps this show moving, but did get slow at two different parts of the play, yet for the most part, Mrs. Warren’s Profession, was enjoyable to watch.