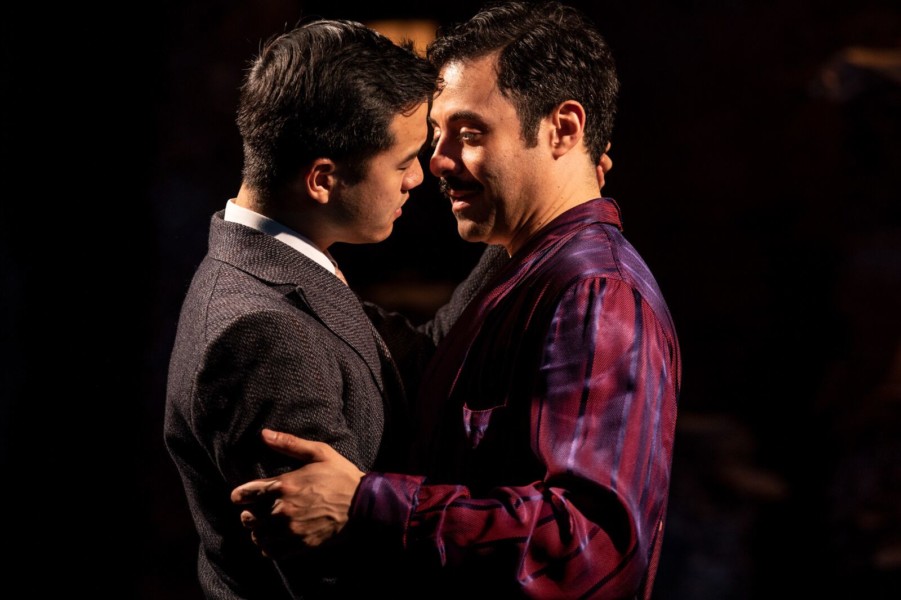 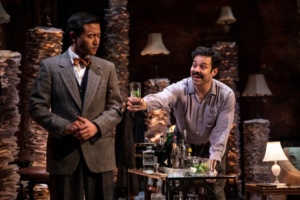 Phillip Dawkins’ The Gentleman Caller, playing at The Cherry Lane Theatre tells the imagined story of a chance encounter between two historical playwrights, Tennessee Williams and William Inge. Directed by Tony Speciale and produced by Abingdon Theatre Company, this two-and-a-half-hour show plays out like gay fanfiction of what might have happened the night these two men met. 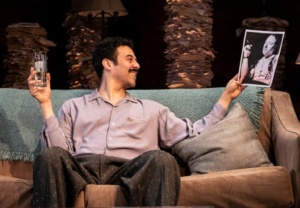 Narrated by Tennessee (Juan Francisco Villa) the play begins with the playwright arriving at Inge’s (Daniel K. Isaac) apartment for an interview. Inge is the drama and music critic for the St. Louis Times and requested a chance to meet Tennessee and interview him for the paper. Shortly after Tennessee’s arrival, a nervous Inge’s real motives arise as he lunges across the room and forcibly strips Tennessee who is paralyzed with laughter. Once sense comes to mind, Inge is able to collect himself and the two discuss the truth versus being honest. Tennessee for his part just wants a kind word written about him in the paper so people might buy a ticket or two to his upcoming show, The Gentleman Caller, later to be named The Glass Menagerie. Inge for his part, struggles with his desires, at work, and at home. As the power is passed back and forth between the two, the night continues with laughter, accusations, and undeniable sexual tension. 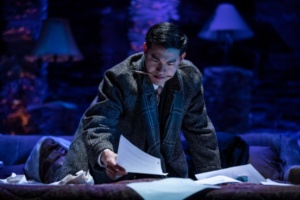 Act Two shows the second meeting of the two men, New Year’s Eve and the night of Tennessee’s open. Tennessee thinks its just another romper in the night, while Inge has been inspired and god-stuck by the playwright. Again, the sexual tension drives the two from revelry to anger and back. But it is only after Tennessee throws himself off the pedal stool Inge has placed him on and confesses his approval of Inge’s own play that we see the truth: Inge never cared for the man, only his opinion of his work. Tennessee can see the truth not honestly spoken through Inge’s writing and watches the man fall back into the repressed cage he so tenderly pulled Inge out of. 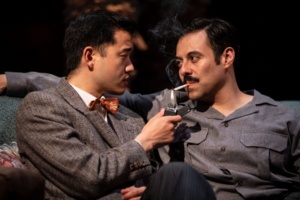 Both actors are fabulous in their own rights. Villa brings a fire to Tenneesse that ignites the tension and keeps Inge on his toes. Though his accent slips from southern to Hispanic from time to time. Isaac for his part keeps the introverted Inge tightly wound, but I found his flamboyance to be a bit strong. For a man who was so closeted and reserved, he should not have come off as the more “swish” of the two. Both actors are powerful in their monologues, pulling the audience into tunnel vision and only allowing them release when they have had their fill.

Direction by Tony Speciale is excellent and entertaining. He pulls the comedy from even the darkest of moments. A bit fast in places, some lines were stumbled upon, but it helps keep this lengthy play moving and not too tiresome.

Scenic design by Sara C. Walsh is beautiful, bordering the stage with towers of papers one could only image are the numerous pages and drafts of these two great writers works. Lighting by Zach Blane, music by Christian Frederickson, and costume by Hunter Kaczorowski all keep you in the moment and highlight the desires and fears of both men.

The Gentleman Caller has humor, passion, and just a little bit of horror, depicting what could have – should have – happened between two of the countries most memorable playwrights. A tad long, this play is certainly one to see, and as “the tired hooker said to the john… Do come!”

The Gentleman Caller: The Cherry Lane Theatre, 38 Commerce St, Until May 26th.

Suzanna BowlingJanuary 24, 2023
Read More
Scroll for more
Tap
A Bright and Provocative Light Shining in Buckinghamshire Burns Out in the End
The Boys in the Band Will Host Three Tall Women For the Actors Fund