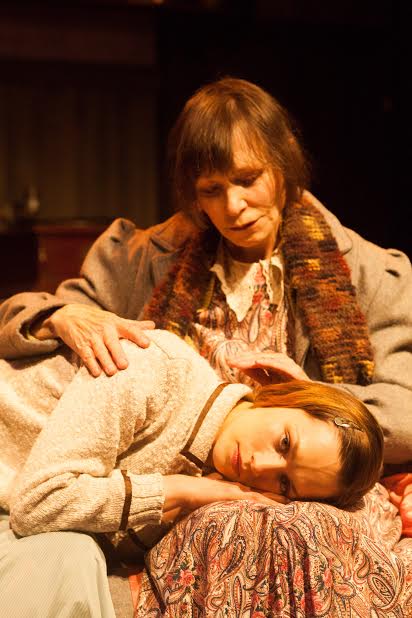 The Gentleman Caller Leaves His Mark on West Los Angeles

The Gentleman Caller Leaves His Mark on West Los Angeles 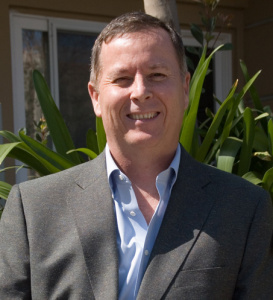 By Rick Ruiz and Cindy Marinangel 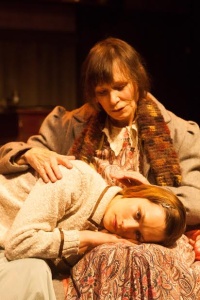 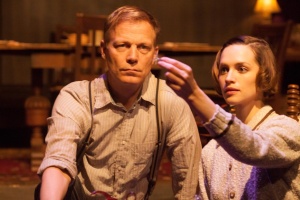 Yes, it was the well-lubricated spirit of Tennessee Williams ensconced in the Greenway Theater, helping to breathe life into a very strong production of this dark tale of hope lost and hope achieved. Few writers have been able to capture the dark confusion of the American psyche the way Williams did.

The opening monologue by Tom Wingfield, performed with a strong taste of reality by Brian Foyster, is a gorgeous piece of writing meant to pull the audience through the looking glass of our superficial reality and into William’s dark world of memories from a pained and unsatisfying life. Dressed in his pea coat and watch cap, standing on what felt like a dark, fogged-in pier far from home, Foyster begins to unwind the tale as if it was his own: “Yes, I have tricks in my pocket, I have things up my sleeve. But I am the opposite of a stage magician. He gives you illusion that has the appearance of truth. I give you truth in the pleasant disguise of illusion.” The biting social commentary and Williams’ genteel southern style is like a showy invitation to enter a carnival of horrors.

Williams’ primary “trick” was to set The Glass Menagerie as a “memory play.”   It is an impressionistic story, told from the safety of the future- a little dark, a little fuzzy around the edges. “Being a memory play,” Tom Wingfield says, “it is dimly lighted, it is sentimental, it is not realistic.”

There is both safety and danger in reprising one of American literature’s great works. It is safe because you know the writing is impeccable, but there is danger because you know every word, every pause, every glance from the stage will be judged against all the others that have been projected at audiences since the 1940’s. Director Jack Heller expertly navigated his way between the two by creating a crisp, well-paced production. Heller’s other accomplishment was pulling together a strong cast of well-seasoned actors with notable credits such as the famed Actors Studio.

The beautifully designed and executed set by Joel Daavid was simple yet elegant and without any rough edges. There was nothing to distract you from Laura’s glass menagerie, her collection of little glass animals that had become the only world where she felt comfortable and in control. Sitting at center stage, just a few feet from the audience, the glass menagerie was impossible to miss.

Karry Knuppe’s gorgeous, haunting performance as the physically disabled Laura enchanted us even through scene changes. Clearly remembering her shy high school days when she thought everyone could hear her leg brace clumping as she entered her classroom, Laura’s journey into her world of glass figurines becomes inevitable. Knuppe handled her chosen deformity with unfailing skill.

Lisa Richards (Amanda Wingfield) made Williams sound modern, natural and sympathetic as the former southern belle in decline, scheming to marry off her handicapped daughter. Richards was a force to be reckoned with as she cajoled and cavorted with the gentleman caller played this particular evening by the charming David Stanbra.

The magic of Williams play shone through brightly and offered the audience the prospect, albeit a brief one, of a happy ending. Laura’s first-in-her-life kiss from the gentleman caller gave the audience a brief satisfying moment that disappeared as quickly as it arrived when he had to confess that he was, in fact, already engaged – literally. It was at that moment that we saw that Laura’s true disability had more to do with her broken heart than her damaged leg as she descended into the world of her glass menagerie.

At that moment Tom finally followed his heart out the door of the family’s little St Louis apartment into the worldly life of the merchant marine. From this new perspective, he was finally able to tell this painful story.

This production deserves credit for letting Williams’ words do the heavy lifting. The director and the cast supported that story in a credible and compelling way that does credit to this great American work.

Suzanna BowlingJuly 28, 2022
Read More
Scroll for more
Tap
A Dog Steals the Show at the Fiasco Theater’s Two Gentlemen of Verona
In Flight a Play Not to Miss