The Giant Hoax A Delightful Children’s Show With a Message 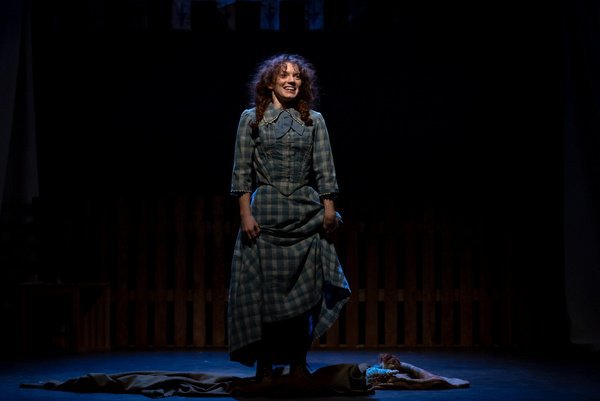 The Giant Hoax A Delightful Children’s Show With a Message

The Cardiff Giant was one of the most famous hoaxes in American history. It was a 10-foot-tall (3.0 m) purported “petrifiedman” uncovered on October 16, 1869, by workers digging a well behind the barn of William C. “Stub” Newell in Cardiff, New York. Both Newell’s and an unauthorized copy made by P. T. Barnum are still being displayed. The original is currently on display at The Farmers’ Museum in Cooperstown, New York.

Kit Goldstein Grant’s new musical The Giant Hoax based on this story, opened tonight on Theatre Row, featuring the adorable Staci Stout as our heroine, Emily.

Ms. Stout will remind you of a young Bernadette Peters, with her plucky performance. Emily is bright with an active imagination, who has run away from home only to find herself in the employ of showman, William “Stub” Newell (a winning Forest VanDyke), the owner of a petrified, prehistoric giant. Stub and Emily take a liking to each other because both believe in tall tales and the giant.

When the giant comes to life courtesy of (a delightful Daniel Moser) and Puppeteers (Mary Albert and Jianzi Colon-Soto) he becomes the lonely Emily’s imaginary friend. We also meet Emily’s mother (Robyne Parrish), through her dreams. Emily has run away wanting an adventure and to no longer be a burden. Stub’s teaches Emily salesmanship and how to tell even taller tales. When P.T. Barnum (Paul Aguirre) threatens Stub’s business with a giant of his own, Emily has to sort through what is fact, or imagination and is telling the truth tattletaling? In doing so Emily grows up, but loses a piece of her innocents, but not her heart.

In the end there is a sucker is born every minuet, as Stubs confesses to the hoax and charges not just 50 cents, but a dollar to see the hoax. And this my friends happened.

Christopher Michaels’ directing was straight forward and Molly Model’s choreography infectious. The music direction by Jonathon Lynch gave an even sound, that filled the theatre.

Goldstein Grant book, music, and lyrics captures the time period and brings about a delightful children’s musical that doesn’t talk down. My one critique would be the canned score did not help bring out the orchestrations by Mark Brymer, made the music sound a little flat.

The Giant Hoax is the first main stage production for IndieWorks Theatre Company and I look forward to seeing more of what they produce.

The Giant Hoax is presented by IndieWorks Theatre Company in association with Visceral Entertainment on Theater Row, 410 West 42 St. until Dec. 7th.