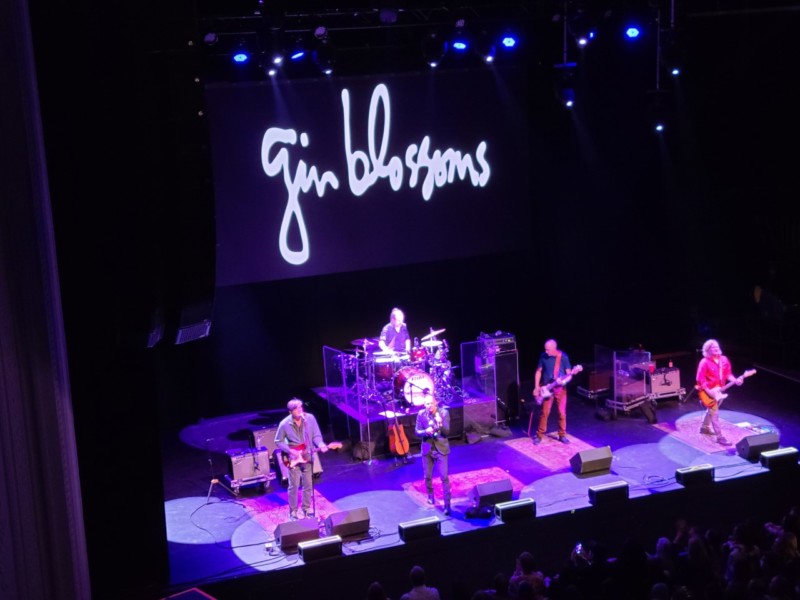 Formed in 1987 in Tempe, Arizona, “Gin Blossoms” had a meteoric rise to promise following the 1992 release of “New Miserable Experience” and its first single released, “Hey Jealousy”. “Hey Jealousy” became a top 25 hit and went gold. “New Miserable Experience” would go onto quadruple platinum. The bands follow up album, “Congratulations I’m Sorry” in 1996 went platinum and the “Gin Blossoms” broke up in 1997. The band returned in 2001 (the band has had in addition to its existing members, 10 older members who came and went) with “Major Lodge Victory” in 2006, “No Chocolate Cake” in 2010 and “Mixed Reality” in 2018.  The bands name comes from a picture of W.C. Fields pictured with gin blossoms. The band has been described as Alternative Rock, and Jangle Pop, its signature sound is mixing world-weary lyrics with ebullient melodies.

The band has maintained its longevity by being mostly a road band; this was evident last night at The Wellmont Center in Montclair, New Jersey, people who attended this general admission concert ranged in age from late 20’s too early 70’s. Quite unusual to draw such a disparaging age difference. The “Gin Blossoms” Southwestern sound is very similar to “The Sidewinders” and “The Refreshments”; at times the “Blossoms” last evening sounded like “The Marshall Tucker Band”. After the bands breakup in 97, two artists (Wilson and Rhodes launched the “Gas Giants”, while Leen formed Rai). Wilson would go on and start a recording studio in Tempe, (the band would later record there). The band today includes: Lead Guitarist: Scotty Johnson, Bass: Bill Leen, Lead Singer(the very talented: Robin Wilson (he also fronts the Smithereens), Rhythm Guitar: Jesse Valenzula and the Drummer: Scott Hessel.

Opening up was Sophie B. Hawkins. Many ask… who is she? Good question! While her rendition of “Bobby Mc Gee” was the best song of the night for her, playing the drums with her feet while strumming the banjo feel to a thud with the audience. Hawkins at times was quite confusing with her song choices as well as her rhetoric to the crowd. Her 9 songs could have been missed because the audience was there to see “The Gin Blossoms”. Opening with the popular “Follow You Down”, the band followed with a weaker “Cajun Song” and “Here Again”. It was the band’s forth song in which it caught its Sea Legs and never looked back; “Face The Dark”, a popular song, rocked the house. By the time the evening’s eighth song, “Hands Are Tied” was concluded The Wellmont Center was in full rock mode. As “The Blossoms” continued its momentum with a deft guitar solo and nifty drum prowess, “Break was a true hit. “Until I Fall Away” was an odd choice leading into the evenings final songs (It’s just not a strong finality song). The last two songs where the obvious ones, it was just a question which one would go first either “Found Out About You” or “Hey Jealousy”. In that order is how the band concluded before encore. In the band’s encore the played a Cure song which did not go over well with the die hard fans and the closed with “Till I Hear From You” which the band found most people heading for the exits and to me begged the question why not end on “Jealousy”? Still a formidable band, “The Gin Blossoms” continue to enjoy playing music, tight all evening the band did not disappoint the Montclair crowd. I think if this band did not break up it would be every bit as big as the great Southern Rock Bands. The musicians are all very talented and their songwriting resonates across the audience that they seek.

Suzanna BowlingNovember 28, 2021
Read More
Scroll for more
Tap
KZ Tandingan and Ilaiyaraaja Are Featured on Times Square’s Famous Billboards
My View: Alan Broadbent and”Trio In Motion” at “The Jazz Corner Of The World”