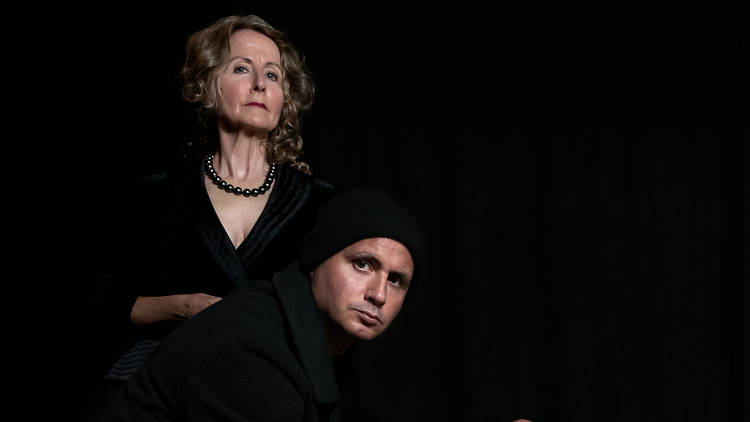 We were told we were getting a new production of Tennessee Williams’ The Glass Menagerie, inspired by the horror films of Wes Craven. However the production that opened last night at The Wild Project co-directed by Tony nominee Austin Pendleton and Peter Bloch, was not seen through a nightmarish lens, but an ill conceived one.

The casting of Matt De Rogatis as Tom, the narrator of this memory play, thanks to the direction, has been turned from a poetic dreamer to an Appalachian hillbilly (dialect coach Paul Meier), which is just down right odd. He constantly laughs, when the emotion text calls for a different reaction. He seems to be in a different play, but then again so do the other actors in this production.

As the normally demonstrative Amanda, Ginger Grace, keeps the Southern gentility, but never do we see the woman who has destroyed her children. We feel sorry for her, abandoned by her husband, trying to raise her two children under harsh financial conditions. We see the longing Amanda feels for the comforts of her youth and what she wishes for her children, especially Laura. She admits that she is almost “hateful” towards them, but you never see that. She relies on Tom for almost everything. His pay from the warehouse, is how the family survives and now she expects Tom to find Laura a beau.

As Laura (Alexandra Rose), we see a defiant woman, who refuses to face the world. Her slight limp is barley noticeable, making her seem trapped by her own perceived ideas, but we never really learn why. This performance is flat and almost non-existent. She hides in the shadows.

As the gentleman caller Jim (Spencer Scott), fails to spark excitement. Jim who was a popular athlete and actor during his days in high school when Laura had her first and only crush is now working with Tom as a shipping clerk. He tells Laura his plans for the future which include a finance. Again her dreams have been dashed.

Even the creative team set designer Jessie Bonaventure and sound designer Jesse Meckl, which features an original score by Sean Haggerty, inspired by The Exorcist soundtrack was not scary. The only successful elements were the lighting by Steven Wolf and Arlene’s costumes.

They keep this over 2 hour production, without an intermission and I think it’s because they are afraid people will leave. Some were brave enough to do so.

The Glass Menagerie by The Ruth Stage at The Wild Project, 195 E 3rd St through October 20

Suzanna BowlingJanuary 24, 2023
Read More
Scroll for more
Tap
Jackie Sibblies Drury and Lauren Yee Are the Recipients of 2019 Steinberg Playwright Awards
He Says: ATC’s Sunday on a Saturday with the PH’s Heroes of the Fourth Turning Proudly Shooting in from Above