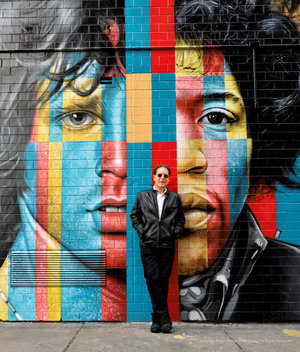 VIVA JOHNNY RIVERS — (from our colleague Roger Friedman/SHOWBIZ 411) This is just a Sunday rant. Johnny Rivers, I was going to post some of his videos anyway. I just love him, and always have. He had so many hits, was so important to Louisiana music, rockabilly, rock and roll. And if you catch him now, he’s better than ever. Plus, he’s very much alive! He’s 77. But he’s not going to live forever. Meanwhile, look at these sad choices for induction into the RRHOF: Notorious BIG? Judas Priest? Before Johnny Rivers? Please. And Johnny was sort of the American brother from a different mother to my other favorite person, Dave Edmunds (also ignored with Nick Lowe by the RRHOF). Listen to Johnny’s guitar. Oh my god, it’s beautiful. Yes, it’s Sunday and there’s no baseball. Viva Johnny Rivers!

PESCI’S BACK –— On Nov. 27, Martin Scorsese‘s highly anticipated gangster/crime movie The Irishman will premiere on Netflix, bringing legendary actors Robert De Niro, Al Pacino and Joe Pesci back to the screen together — but it’s not even the most interesting release of that week.

Two days after the film’s premiere, Pesci will release an album titled Pesci … Still Singing. Yes, Joe Pesci — the actor known for his snappy wit and memorable characters in films like Scorsese’s Goodfellas, My Cousin Vinny and many more.

You see, Pesci is also a singer in addition to the accolades he’s earned over the years for his intense movie performances, and Pesci … Still Singing will actually be his third album to date, and the first since 1998’s Vincent LaGuardia Gambini Sings Just for You, which was an in-character record from Vinny LaGuardia Gambini, Pesi’s character in My Cousin Vinny.

As a preview of this new album, here’s the track “Baby Girl,” which features Adam Levine of Maroon 5 — who appears alongside Pesci throughout the record.

Kudos to Pesci on this “comeback,” as The Irishman is his first film role since 2015 and just his third in the past decade, as the 76-year-old has maintained a relatively low profile in recent years. Great to have him back!

BRYNE’S UTOPIA — We went to see David Byrne’s American Utopia Saturday night and were just blown away. I’ve known Bryne for decades and expected something startling, but nothing could have prepared me for the visionary presentation The 67-year old Scotland-born Byrne has always moved the needle and this play/concert, from the fantastic visuals to the amazing 11-piece band he has put together, is simply a dazzling, immersive experience from the word go.

The play opens with a gray-suited Byrne sitting at a table pondering the human brain. In fact, he’s actually holding one in his hand. Byrne has always questioned everything and that’s the way this event starts. Byrne says that babies have more brain cells than adults … and, pontificates aloud what happened.

From there, it’s sort of a Byrne-concert with him performing  everything from the Talking Heads’ “Once In a Lifetime” to “Burning Down The House.” Byrne’s new music, including a riveting song entitled “Evrybody’s ComingTo My House” (written with Brian Eno) is just brilliant. The song could be … and, probably will be a massive hit.

The sold-out crowd, Byrne devotees for sure,were exuberant; both to the newer and older material. Byrne encouraged the crowd to dance, and dance they did.

That the show is so well structured; from the staging to the rather brilliant choreography, was really no surprise to me. What was surprising was how politically slanted it was. It’s subtle, but he speaks to everything from voting; global warming and human rights and its sincere and deftly programmed (there was a sign-up voting booth in the lobby).

He never said what we should do, but rather, what have we done.

The big surprise was his doing Janelle Monae’s, “Hell You Talmbout,” which openly references the names of victims of violence. It’s a startling choice, but it fits perfectly in his show. It’s a powerful moment.

Just a masterpiece for sure. One of the best things I’ve seen on the Great White Way in years. Do yourself a major favor and go see it. Utterly brilliant.

MILLER TIME AT MY FATHER’S PLACE — Friday, February 21, is the date for the debut Long Island-performance of Robert Miller’s Project Grand Slam at the legendary My Father’s Place. It’ll be an auspicious debut for the band and we sat with Miller to answer some finer points about the performance:

T2C: I think the new My Father’s Place at The Roslyn Hotel is an excellent venue for you. Were you ever at the original MFP?

Miller: The original My Father’s Place was one of the great rock ‘n roll clubs of the NYC area in the 70’s and 80’s.  All the greatest artists played there, from Springsteen to The Police.  For a kid like me who grew up in Queens, NY, it was an incredible place and I went there many times. Kudos to Eppy who ran the original club and has now opened the successor. The new MFP is a major upgrade, now located at The Roslyn Hotel. I am very excited for PGS to play there. And it will be our first engagement on Long Island, where we have many fans.

T2C: Your current  PGS 7 is my favorite album so far; what will the set list be for MFP? In case you wondered, our favorite track is the Dobie Gray song, “The In Crowd.” Just an inspired cover.

Miller: Thanks. PGS 7 (our 7th studio album), might be our best one yet – or at least that’s what the critics have said!  Every review has been 5 stars. I love variety in our music, and on PGS 7 the songs I composed run the gamut from hard rock to funk to Latin to ballads.  Something for everyone but always keeping true to “the PGS sound.”

When I originally formed PGS in 2007 we were known as a contemporary jazz group playing mainly instrumental music. Since I re-formed the band in 2015 I’ve taken PGS in a very different direction.  Now we are a true fusion of Jazz, Rock and Latin – with mainly vocal songs.  Our singer – Marilyn Castillo – is extraordinary, as is the rest of the band. I write and arrange all of our material, and one of my musical signatures has been to “reimagine” a classic 1960’s song in the PGS style on each album.  I’ve done this so far with Jimi Hendrix, Cream, The Who, The Kinks, and now on PGS 7 with Dobie Gray’s “The In Crowd”.  So yes, we will definitely include that one in the set when we perform at My Father’s Place!

T2C: I’m hoping to see you perform again at The Groove in NYC. Any surprises in-store?

Miller: The Groove in Greenwich Village is like our home base in NYC.  It’s an intimate club with great sound and a great vibe. Over the next several months we will be playing two special Sunday evening gigs there on November 17 and December 8, both with a 5:30 pm start, as well as a Saturday night gig on January  11 with a 7:30 pm start.  At these shows we will be debuting some of the new songs that I’ve written for our next album along with the PGS songs that our fans have come to love.

T2C: Tell us about the new upcoming PGS album.

Miller: I wrote all the songs for the next PGS album over the summer.  The new songs further evolve the band’s music.  At this stage of my career I feel that I’ve got no artificial boundaries on what I write, and I always want to push the envelope.  So for example one of the songs I’ve written for the next album is what I call a cowboy jazz song.  Another is  “Fanfare” – an ode to a particular small town that I love.

I like to release a new album each year.  That’s the schedule we’ve had since 2015.  New music keeps the band fresh.  Plus, I figure if The Beatles could release three albums in a year I can do at least one!

We will be recording the new album at the end of January at our favorite studio – EastSide Sound – which is owned and run by my friend Lou Holtzman, who has co-produced with me our last several albums.  Lou and I grew up together in Queens so I’ve known him forever.  We will aim for releasing the new album in mid-2020.

T2C: Thank you … we’ll see you at My Father’s Place in February.

SHORT TAKES — Tonight is Donnie Kehr’s Rockers On Broadway, with new additions Alexa Ray Joel, Rupert Holmes and Keith Carradine performing. We will be there tonight, as well as bassist-extraordinaire Will Lee; and, honoree, producer Russ Titleman. Full report to come … After two shows this past weekend, Micky Dolenz headed to Nashville yesterday for the James Burton Foundation event Tuesday. Joining Micky, will be Joe Walsh; Paul Shaffer; Brian May; Albert Lee and Steve Cropper. The event coincides with CMA week. While there Dolenz will record an interview for Burton’s SiriusXM radio show … Speaking of SiriusXM, there’s talk about a possible radio show for celebrity-biographer Mark Bego. Our take: A terrific idea. Insightful, funny, and on-point, Bego, over the course of his 60+ books, has proven himself a terrific writer and interviewer. Listen to any of his podcasts with Zach Martin. Brilliant stuff. Stay tuned …

Great news; I think we finally secured a hard-copy of the new Robbie Robertson album, Sinematic. Thanks to Tim Plumley at UME. Now, if we could only get a copy of the new Ringo Starr CD. I hear its fabulous …

My current fave record is Maroon 5’s “Memories.” It could be the best thing they’ve ever done. It’s about their manager, Jordan Feldstein, who passed earlier this year. Totally moving, totally mesmerizing.

…Congrats to Keith Girard (The Improper) on the official launch of the New York Independent ...

Suzanna BowlingMay 19, 2022
Read More
Scroll for more
Tap
For Colored Girls Who Have Considered Suicide / When The Rainbow Is Enuf Is Back in Full Force
T2C Talks to Brian Stokes Mitchell About the Holiday’s, Music and Songs As Three Act Plays