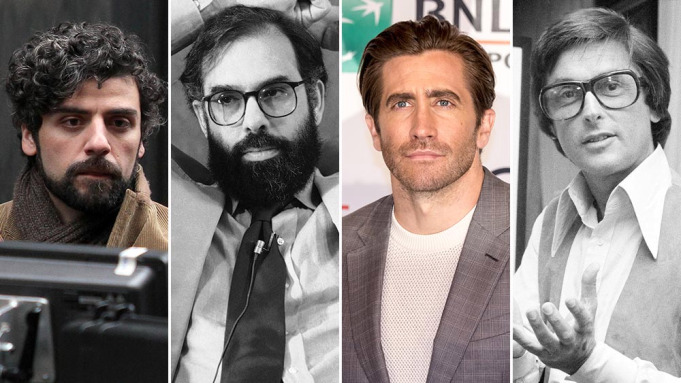 AND, THE GODFATHER — (via Deadline/Mike Fleming, Jr.) Barry Levinson will direct Francis And The Godfather, with Oscar Isaac starring as Francis Coppola and Jake Gyllenhaal as Robert Evans in a drama about the legendary and wild battles that went into making the 1972 classic The Godfather.

While The Godfather is considered to be one of the greatest American films and a symbol of the 70’s auteur era, getting there was no easy task. Coppola was 31 at the time, determined to convince Evans and the studio to allow him to film expensively in New York, set in the time period of a novel which would become a big bestseller. This after the original Mario Puzo script was set in contemporary Kansas City. Among the other debates was the idea to gamble on Marlon Brando, an eclectic character who hadn’t been in a hit film in years, to play mob family patriarch Don Corleone (for which he would win the Best Actor prize), and also Al Pacino as Michael Corleone, a character who slowly evolved from a desire to get far away from the family business to taking it over when it was clear his father would be murdered even after a bungled assassination attempt. Evans, who took the top job after a career as an actor, had pressures all his own, as the studio was in danger of closing up shop. There was also the uneasy discussions with real mobsters who were none too pleased to have their dirty business to be aired in a major studio film.

“Out of the madness of production, and against all odds, a classic film happened,” Levinson said.

The behind the scenes stories are ones that I’ve heard for many years from Peter Bart, my boss for 20 years at Variety (and sometimes coauthor on a back and forth column about movies. Bart was pried away from The New York Times to become Evans’ number two creative executive, and he was at the center of all these glorious arguments. It will be very interesting to see who Levinson casts to play him. and for that matter, Robert Duvall (Tom Hagen), James Caan (Sonny Corleone), John Cazale (Fredo), Talia Shire (Connie Corleone), Diane Keaton (Kay Corleone) and the rest of that fantastic cast. But the film clearly focuses on the clashes between filmmaker and a studio chief who badly needed a hit.

Aside from the Oscar for Brando — who famously boycotted the proceedings and sent to accept his trophy Sacheen Littlefeather, an Apache activist for Native American rights, as the actor protested Hollywood’s portrayal of Native Americans and the standoff at Wounded Knee — the film won Best Picture and another for Best Adapted Screenplay for Puzo and Coppola. There is rich terrain here for a movie for buffs. Ben Affleck is directing something similar in a movie about the making of Chinatown.

For his part, Coppola (who just did a new cut of the final film he’s entitled Mario Puzo’s The Godfather, Coda: The Death Of Michael Corleone), has given his approval.

Said Coppola: “Any movie that Barry Levinson makes about anything, will be interesting and worthwhile!”

1972 seems like eons ago … and, it is, especially considering what 2020 has brought, but the reality is the film is a diamond in the rough. I came upon it about a month ago, while channel surfing, and couldn’t peel my eyes away. From Brando’s braggadocios character to Pacino’s steely gaze and, a young and not-so-innocent Diane Keaton … it’s a modern day miracle for sure. The best of the Godfather-canon IMO.

Affleck’s film on the making of Chinatown, from the book, looks great on paper but many in Hollyweird doubt it’ll ever happen. In fact, many on the Left Coast are either departing the film world all together; updating their resumes or looking for work.

GREENDALE RISES — Neil Young has announced Return To Greendale, a live album and concert film from his 2003 tour, which centered around his 25th studio record Greendale. The film and live record will be released on Nov. 6.

Per a press release – “The songs and performance remain topical as ever, powered by themes of environmentalism, corruption, and the destructive effects of capitalism. Featuring Young’s trusty partners Crazy Horse, the Toronto recording captures the epic experience of Young’s immersive, small-town rock opera. The multimedia exploit seamlessly blended Young’s powerful lyrics and Crazy Horse’s heavy blues thrash with musical theatre, as actors joined the band onstage to play out Greendale’s narrative as it unfolded. Like Greendale itself, the show eschews elaborate production in favor of a ragged and rough-hewn feel that does right by its source material.”

Return To Greendale will be released in multiple formats, the most comprehensive of which is the limited-edition deluxe box set. The set will include a Blu-ray of the full concert, two LPs, two CDs and a DVD of Inside Greendale, a documentary about the making of the album. The other formats will include a double vinyl, a two-CD set and a digital version available on Neil Young Archives and on streaming platforms.

Young is for sure an acquired taste … but, I love him. His performance of “Rockin’ In The Free World” on SNL in 1989 remains one of the best live performances (albeit on TV) that I’ve ever seen. The power and passion delivered in that performance was awesome. People who witnessed it live still talk about it to this day; legendary in fact.

I saw the Greendale show (with radio’s Zach Martin) and just loved it. There were sets, livestock, and actors portraying characters from the Greendale-narrative. I loved it from start to finish … it worked brilliantly.

I recall that night quite well. Some of the audience got restless expecting hit after hit, but when it was over, we went back to meet Young and he was sitting there in his de rigueur Neil Young-look eating a bowl of granola! I didn’t expect anything less.

I’ve always wondered if Young would ever mount a Greendale-sequel. I guess this is it.

You’ve got to give Young credit – he always does what he wants to do, when he wants to do it. It does seem a long wait from 2003 till now to see the DVD, but I can’t wait.

SHORT TAKES — Showtime has released a trailer for Belushi, R.J. Cutler’s feature documentary about the too-short life of comedian and Saturday Night Live vet John Belushi, premiering Sunday, Nov. 22. If you read Bob Woodward’s Wired – harrowing for sure – you might think there’s nothing more to say except recalling his tremendous legacy. I do recall hanging numerous times at the fabled Blues Brothers Bar (282 Hudson Street, NYC) in lower-Manhattan (and, yes, that was harrowing too!) with Belushi himself; a whirlwind of a man. Anything new? We’ll see. Check out the trailer here:

…I’ve been watching The Third Day on HBO and am totally fascinated by it, yet, I am understanding very little of it. Witches, magic, odd-ball characters; and, a mysterious little boy are the basics. Jude Law, who is terrific, I think, embarks on a journey to remember his little boy, finds a young girl seemingly about to commit suicide, saves her and returns her to her home, which is only accessible by a narrow road, which disappears into the water each afternoon …

only to rise again the next morning. Wow … got that? Needless to say, he is trapped on the island. The two most relevant things I’ve been able to glean thus far, is that Brad Pitt’s movie concern, Plan B, produced it, and, Law’s character seemingly exits the narrative after episode 3. What??!! I’ve been a fan of Pitts ever since Thelma and Louise, and do admire his taste. As far as I’m concerned, Seven is a masterpiece and last year’s Ad Astra, which died at the box office, was splendid. I’m continuing to watch this one … I’m on the second season of Kevin Costner’s Yellowstone. Is it me, or is  it essentially a darker, update of Dallas? Costner is great as the patriarch John Dutton, but, for me the real star is Cole Hauser, who plays Rip Wheeler.

Hauser has been around of years, but shines here like never before. With a beard, shades and totally dressed in black, he’s the series most feared character for sure; but, totally loyal to Dutton. It’s one of the best performances on TV I’ve seen in years … And, Mac Davis and Helen Reddy passed the same day last week. Reddy was a powerhouse and her “I Am Woman” was and is an inspiration. Davis, who wrote “In The Ghetto,” was a terrific entertainer and a pretty good actor. Two giants. RIP.