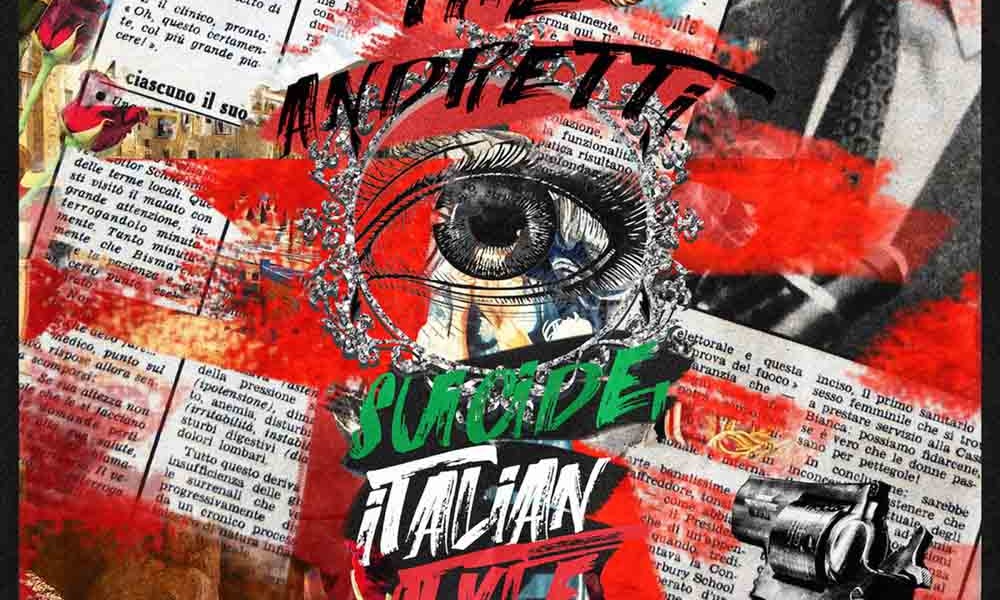 SUICIDE ITALIAN STYLE — Prepare yourself for 2020’s wildest musical ride yet. That’s the only way to describe Suicide, Italian Style, the mind-blowing new release from The Andretti, out now  in special multi-colored collector’s vinyl, available exclusively through Bandcamp, and on all major digital platforms.

Springing from the heart, soul and intellect of veteran music-maker Joe Ferrara, Suicide, Italian Style is the aural equivalent of a Jackson Pollock painting: A creation of challenging, compelling, and ultimately satisfying order borne from a seemingly random and chaotic sonic chaos that melds David Bowie with Dick Dale, Ennio Morricone,  Frank Zappa and Henry Mancini.

The album is sprinkled with just enough 60’s experimentation, 70’s glam, 80’s bombast and 90’s noise rock to conjure a collection of songs (with elements of exotica and Latin, rockabilly, surf, doo wop and metal) that grabs the listener on the first spin and refuses to let go.

This “mad-scientist” approach stands in stark contrast to contemporary music’s auto-tuned, disposable-pop default position. So, what would compel its creator to devise such an adventurous, impossible-to-pigeonhole collection of songs?

“The album was motivated by a desire to create songs I find interesting and which incorporate many different styles, but still maintain a classic pop sensibility,” says North Jersey denizen Ferrara ,now living in suburban Philadelphia.  “Also,” he adds in his signature sardonic style, “I had nothing better to do.”

As for the disc’s lyrical content, Ferrara is hard to pin down, but on the other hand, he admits even he doesn’t have a real handle on it.

“Lyrically, there is no unifying theme except, perhaps, the songs all explore some of the darker and/or abnormal aspects of human behavior.  Most of the time I just like to construct phrases that sound pleasing  ̶  or displeasing  ̶  when sung.

“As a result, my lyrics are often fairly abstract, and don’t necessarily follow a traditional structure.  Without giving too much away, if I had to be specific, I’d say these songs are about the excesses of the ancient Romans; out of work soap opera stars who are now arms dealers; male prostitute blackmailers; race car “drivers with a death wish; a castle made of junk auto parts that functions as a ‘lover’s lane’ in some fictional border town; Faustian death cults; the New Jersey mafia and, of course, Kim Novak.

Although Suicide, Italian Style — whose title Ferrara describes as a takeoff on 1960’s films Love Italian Style and Divorce Italian Style — is released under the banner of The Andretti, it is decidedly not a band effort. While he did enlist a few outside musicians including Mars Volta drummer Blake Fleming, Ferrara insists the concept of the musical collaboration is not one to which he subscribes.

“I don’t think the band concept is passé for everyone,” he says, “but I certainly think the notion of music being presented as the sum total of a small collective of people’s efforts, and then that music being absorbed through the prism of a perception of that group that is formulated by marketing the style or personality or demographic that “band” conveys through its media presence, is a pretty stale tactic.

“Who makes the music doesn’t matter. The music should matter ̶ especially to an angry fuck like me with his cigarettes and vintage microphones.”

Certainly, the musical curio of the year.

CROSBY SHADES VAN HALEN —David Crosby has come under fire thanks to a tweet posted following the death of Eddie Van Halen.

It all started when one of Crosby’s followers asked for his opinion on the recently deceased Van Halen guitarist. The folk singer’s response was simply “Meh.”

The dismissive tone of the tweet immediately caused backlash, as a chorus of Van Halen’s fans criticized Crosby for his response.

“Fuck this guy,” L.A. Guns guitarist Tracii Guns pointedly said of Crosby. “Fuck this answer and most of all fuck this guy. I don’t give a shit what anyone says. That’s bullshit David.”

Testament guitarist Alex Skolnick took a more diplomatic approach, tweeting: “I appreciate @thedavidcrosby too much for this to get in the way, but a much better answer would have been: ‘I know he meant a lot to so many but his sound & style just weren’t my thing.’”

Following the outrage of celebrities and fans, Crosby clarified his stance, saying in part, “Look I get it. Many of you loved Van Halen. And the one time I met he was nice. And he was talented. Meh to me means I don’t care that much. And I don’t. Doesn’t mean he wasn’t good, he was but not for me.”

One follower offered a better way that Crosby could have gotten his point across, suggesting the rocker should have said: “I don’t care for the end product; it’s just not my style. But there’s no question at all about his talent and the revolution he brought to the whole industry.” Crosby retweeted the message and called it “better.”

SHORT TAKES — The name Angelo Mysterioso has surfaced again. It used to be a nom de plume for Beatle-George Harrison; but, then last year appeared again on albums from both Eric Clapton and Ed Sheeran, leading pundits to suggest that others were using the moniker. Said Clapton at the time, “I heard there were rumors about it being George, and I thought that was great because it’s nice that people know about that story. That’s why we used to do it a lot, and I still like to do that now. I’ve been that ‘angel’ sometimes.’ Stay tuned …

I just watched my favorite episode of Star Trek: The Next Generation – from Season 3, episode 26, The Best of Both Worlds, where Picard is assimilated in a Borg. If you’re a Trekker, this was one of those episodes which was both terrifically interesting and frightening. It’s from 1990, so a bit dated … but, still good. Den of Geek gave it a great grade: Watch. A justifiable classic … In this day and age, who would put out a CD -for a new song- without any information on the actual disc? Suppose you misplace the CD … how would you find it? I guess too much wacky weed …

And, Donnie Kehr and Cori Gardner’s Rockers On Broadway; Band Together is locked for Monday, November 9.

G. H. HARDINGSeptember 23, 2021
Read More
Scroll for more
Tap
MAD About Jewelry 2020
What To Watch October 15th To Take Away The Blues