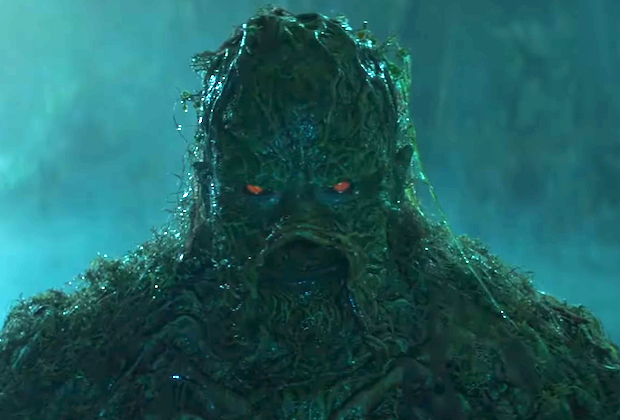 IT’S A SWAMP THING — From June 2019 — Swamp Thing is about to sink back into the bog it just came out of. DC Universe has cancelled the sci-fi drama less than a week after its May 31 premiere, TVLine has learned.

A rep for the digital subscription service declined to comment on the super-quick cancellation, but sources confirm to TVLine that the freshman series will not be back for a second season. UPDATE: An accounting error regarding the series’ North Carolina tax rebate may have led to the series’ swift cancellation.

The live-action drama, which stars Crystal Reed (Gotham) as Abby Arcane, follows Abby as she investigates what seems to be a deadly swamp-born virus in a small Louisiana town. Not long after she starts poking around, she discovers that the local swamp holds mystical and incredibly terrifying secrets, and when unexplainable and chilling horrors emerge from the marsh, no one is safe.

Swamp Thing‘s episode count was cut from 13 to 10 in April, in what would turn out to be a harbinger of the show’s eventual fate. A source confirms to TVLine that the remaining nine episodes of Season 1 will continue airing each Friday through the Aug. 2 season (and now series) finale.

For some reason: the CW started airing the full-run of shows last week and I must tell you, the entire production is an absolute winner. Apparently the so-called tax problem was one in the neighborhood of some 25 million, so it was not all that small of a matter and the producers probably felt that to cut their losses was the best thing to do.

Of all the questionable comic-book-to-movie productions, I must admit to an undying fondness for the original 1982 Wes Craven (written and directed) Swamp Thing movie, that starred Louis Jourdan, Adrienne Barbeau and Ray Wise, as Alec Holland, the man who would become the monster – who was played by the terrific Dick Durock.

The movie was full of the type of flourishes one would expect from a comic turned into a movie, but did contain some terrific acting from Jourdan and Barbeau and even Wise, who would hit it big years later in a little-known show (!!!) called Twin Peaks. And, two of the movie’s producers were Benjamin Melniker and Michael Usland, who would go onto success producing the Batman-movies.

With the Fall-TV season just now starting (and, in all truth, in dreadful disarray), I’m sure the CW had this on hand and since they paid for it, are burning it off. Crystal Reed is just terrific, and a perfect lead for the series. The effects are pretty spectacular too.

There’s no question in my mind that this series could have made it.

Wonder’s last album A Time To Love was released in 2005. His last song was “Faith” with Ariana Grande in 2016 for the movie Sing.

The new songs “Where Is Our Love Song,” features Gary Clark Jr. and “Can’t Put It in The Hands of Fate” features Rapsody, Cordae, Chika and Busta Rhymes.

Proceeds from “Where Is Our Love Song” will go to Feeding America.

The new music is released through Wonder’s new label So What The Fuss Records. Stevie has also confirmed that he is no longer signed to Motown Records for the first time since 1962. However, his So What The Fuss label is distributed by Universal, which owns Motown.

Stevie Wonder was 11 years old when he signed with Motown. He is now 70.

STAR TREK DISCOVERY — When this show was announced in 2017, with Bryan Fuller at the helm, I knew his take would be interesting, His Pushing Daisies is one of the all-time famous failures, yet it definitely defined him as an auteur of the highest order.

Also, the fact that the show would essentially lead off CBS’ new streaming service, CBS All Access, was pretty impressive. That said, I have enough streaming services and certainly didn’t want one more … especially for an untried series.

This September, with the TV season is total disarray; CBS opted to put the show on the network fee starting with Season One.

I watched the first episode and while the tech was fascinating (and, the timeline was set well before even the original Trek-series) there was no real, for me at least, human touch. Certainly that first Star Trek, with Shatner and Nimoy, brilliantly had that and face it, that’s why the whole Trek franchise has lasted as long as it has.

Discovery lost me in the first half hour.

Now, since that first season, they’ve just started their third; Fuller has left the show; a number of showrunners have come and gone; and, the second show of the season had a new captain (Jason Isaacs) who seemed to have ulterior motives.

The end of the second season closed with the ship being stuck in wormhole and being flung some 900 years in the future. What?

So, the original plan for the show has been thrown out the window and with this new season, they’ve introduced a new story-line … how to get home. Some of the original characters have remained (Sonequa Martin-Green, Doug Jones, Anthony Rapp) but, they’re still very light on character development IMO.

Amazingly, the show was just renewed for a fourth season.

SHORT TAKES — Is it me or was that Willie Geist/Lorne Michaels interview bumped a week? Seems to me it was originally promoted to be seen last week on Willie’s Sunday show … but, moved because of a tennis match to this Sunday? Geeze, Michaels was once thought to be the primary force behind NBC. Guess with Comcast onboard now, his presence has been shifted somewhat …

Kent Kotal’s always-enjoyable Forgotten Hits ran a great article on Donny Osmond’s radio-comeback with the terrific “Soldier Of Love” in 1989. He also ran a great shot of Donny, with WOR’s Tom Cuddy (who organized it all when he was at WPLJ) and Micky Dolenz, when Donny appeared at the much-missed Feinstein’s at The Regency. Here it is …

Am halfway through the book Good Lovin’ by The Rascals’ Gene Cornish and am just loving it. His stories, his memories … all just brilliant. July of 1964, he’s on a tour of Puerto Rico (!!!) and is talking to his keyboard player David Hucks and asks, if he could believe all the excitement. Hucks says, “The only time I got my picture taken was when I got arrested.” Priceless. More to come on this one … Remember that Kid Creole and the Coconuts’ 40th anniversary re-release of their debut set, Off The Coast Of Me?  We hear that England’s The Guardian and Mojo both wanted to do major articles on it, but couldn’t get a response from management. Never heard of someone turning down ink … We hear a Tick-reunion is in the works featuring all the current and past members, like Patrick Wharburton and Micky Dolenz. More on this shortly … It seems one chapter of The X-Files is permanently closed, as creator Chris Carter has plans to continue the franchise with an upcoming animated spinoff that is in the early stages of development. Carter also apologized for how he ended the series; with a series of unanswered questions. Animated series? Never going to work …

Robert Miller, of Project Grand Slam, releases his first-ever solo album Summer Of Love (2020) next month. Skope magazine said: “ Robert Miller’s foray into the world of solo performers in Summer of Love is nonetheless a profound way of debuting a new dimension of his musical profile. Stylized with the ambitiousness of two extended plays that have been combined into a single disc for convenience rather than aesthetics, this isn’t an album that I would recommend for the casual passerby as much as I would the devoted fusion enthusiast, but all the same, it’s a five-star effort without question.” … The second episode of Fox’s NeXt, was as brilliant as their debut one last week. John Slattery is off the charts … Happy Bday to royal photographer Jeff Smith!