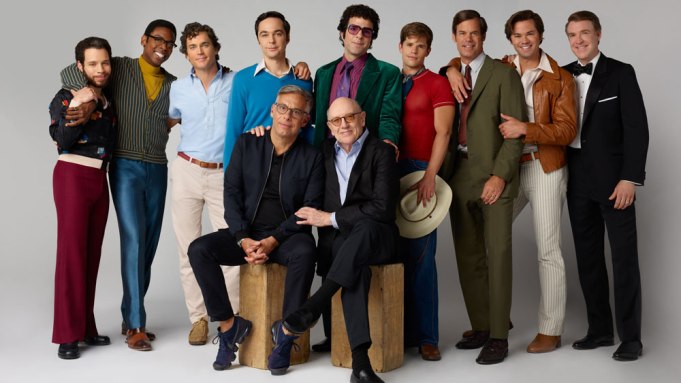 THOSE BOYS IN THE BAND — I remember seeing the original move The Boys In The Band in 1970; and, it was, frankly, quite shocking. Nothing like that had ever appeared on the silver screen before. Sure, it spoke to a great many people, but it was revelatory from start to finish. Mart Crowley wrote it and delivered just a terrific portrayal of gay life; a life that was whispered about, but never openly spoken about back then.

What I didn’t recall was the director of that movie, William Friedkin: one of my all-time favorite directors for sure. He followed Boys with The French Connection (1971); Cruising (1980); To Live and Die in LA (1985) and, of course, The Exorcist (1973). He also helmed 1977’s Sorcerer (which is one hell of a movie); and The Night They Raided Minsky’s.

Friedkin was a rebel; exactly what Peter Biskind’s 1998 book, Easy Riders, Raging Bulls: How the Sex-Drugs-and-Rock ‘N Roll Generation Saved Hollywood is all about. The book follows Hollywood on the brink of the Vietnam War, when a group of young Hollywood film directors known as the “movie brats” are making their names. It begins in the 1960’s and ends in the 1980’s.

I watched Netflix’s version of Boys this weekend. This was of course, the stellar Broadway cast, from last summer with Jim Parsons, Zachary Quinto, Matt Boomer, Andrew Rannells, Robin de Jesus; Brian Hutchison; Tuc Watkins and Michael Benjamin Washington. I had meant to go see it on Broadway, but didn’t a chance.

The simple plot is a birthday party attended by six gay men in 1968; and, one unexpected guest. As the tension flows, they play a mischievous game that turns quite harsh. It’s a passionate, albeit melancholy look, but definitely heartfelt and quite accurate portrayal of gay life in New York City back then.

Joe Mantello (so good in Hollywood with Parsons) directed it and he did an exemplary job. He didn’t update all that much, which was perfect; as the source music and fashions from 1970 remain and actually, just watching that, made me squirm a bit. New York was a way different time back then, and the first thing that struck me, was the fact that so much of what is spoken about … is taken for granted today.

Parsons, who I’ve been a fan of for years -and, fresh off his Emmy-nominated role in Ryan Murphy’s Hollywood) is a standout … but, to me, he always is. The real surprise was Zachary Quinto as the birthday boy Harold. Funnily enough, I had just watched Quinto in Star Trek: Beyond where he plays Mr. Spock – and, quite good. So, I guess you could say it was a Quinto-weekend.

Each scene is full of passion and pathos of those times. The last scene of Parsons running aimlessly down the streets against his own demons is searing.

The movie is not a joyous lift, but rather, a note-for-note play of a bad time in our history. Just terrific, I loved it.

THAT BRYNE BOY —When I first met David Bryne in the terrific No Wave years in Manhattan, I just knew that this kid would prove his worth before long. He did it in fine style with The Talking Heads and their across-the-board success; he did it again with the film Stop Making Sense, directed by the late-Jonathan Demme; and, he’s done it again, with the last show I saw on Broadway, American Utopia.

If you’ve seen it, you know that it’s more than just a performance; there’s a simply sensational band, populated with artists from Brazil and Toronto; to some wonderful choreography and dazzling light effects. It ran on the great White Way until, the pandemic shut everything down, but Oscar-wining director Spike Lee shot several shows, and it premiered this past weekend on HBO.

I didn’t know if it was to be from an actual series of shows , or from a stand-alone performance, but it was from the terrific Hudson Theater and what Spike has done so well, is capture it from a number of angles-especially from the center on the stage ceiling- and it works even better. When I saw it, I was a tad too far-left, so I missed some of it. Seeing it now … it’s even more striking. With everyone dressed in matching grey suits and barefoot, it’s a scintillating shock to the senses

The perimeter of the inner stage is dressed literally in chain-mail hanging from the rafters and with the lights bouncing off of it, it’s used to maximum effect.

Sure he does the Talking Heads songs, but the newer songs reasonate with a brilliance that show Bryne is still questioning, still contemplating. None more than on a new song, written with Brian Eno, called “Everyone’s Coming To My House,” that could be a hit single if they ever played any new music on the radio anymore. It just rocks with a sinewy rhythm punctuated by terrific flourishes from the band.

A surprise choice is Janelle Monae’s “Say My Name,” performed with just percussion and calling out everyone from George Floyd, to Amadou Diallo and Trayvon Martin. Bryne doesn’t get all that political, but from his comments …. and, this and on elections, you know where he stands. Commendable for sure.

He even had set up in the lobby a booth for quick, voter registration. Kudos!

Our colleague Roger Freidman has already called this the movie of the year and after seeing it, I have to second that emotion. Bryne is asking the questions that we have all thought about … probably many times in this gawdawful year.

TICKS UNITE — On Sun, November 15, (4pm PT/ 7pm ET) – For the first time ever, the casts of  every iteration of Ben Edlund’s beloved superhero series The Tick will gather! All three Ticks, all four Arthurs, along with allies and enemies, join together to read never-produced episodes from The Tickvaults!

They’ll all join in with creator Ben Edlund (Supernatural) and writer/producer Christopher McCulloch (The Venture Bros).

The event will be benefiting food banks in NY, LA, and across the US. Here’s the link for tickets: https://houseseats.live/product/all-the-ticks/

SHORT TAKES — Adele hosts this weekend’s Saturday Night Live; but, apparently is not performing. That’s sort of odd, right? Early reports say she didn’t feel she made it until she did SNL. How about at Tom Cuddy’s WPLJ event at the much-missed China Club? Now, that was a debut for sure. I was there, she was utterly brilliant and everyone there knew a new star was minted that night. Her next (new) album is expected to come out next Friday, 10/30 …

And, Finally am going to see Night Magic; the Studio 54-inspired installation of the Brooklyn Museum. This is my first time at event like this in months and it will be interesting to see what unfolds. Details certainly to follow.