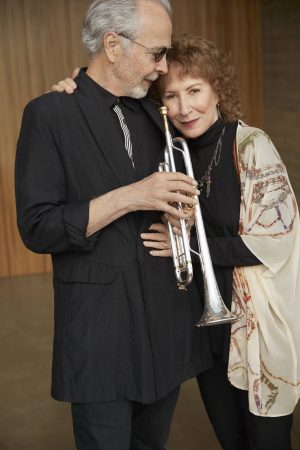 HERB ALPERT IS — The new doc on Herb Alpert, Herb Alpert Is starts off with Herb having breakfast and taking some vitamins … and, builds from there.

Alpert is the legendary performer, record company owner, and visionary, who at 84, has carved out quite a spectacular life for himself. Born in Los Angeles, Alpert narrates the exemplary life he’s had and keeps referencing the fact that if the music, or art, moves him, then he know he’s hit a home run.

Herb, with his Tijuana Brass ensemble, essentially captivated the music scene in the mid-60’s, with a stunning run of hit albums and singles. He also partnered up with legendary-music man Lou Adler and, together,  worked with the likes of Jan & Dean and Sam Cooke.

South of the Border, the third album by Herb Alpert & the Tijuana Brass, originally released in 1964, contained the track “The Mexican Shuffle”, which was reworked for a TV ad for a brand of chewing gum popular at the time, and re-styled as “The Teaberry Shuffle.” It was, perhaps, the first-ever example of product placement.

Needless to say, it was a phenomenal and pushed Alpert and the Brass to even greater success.

Alpert said that while he was searching for that first record deal, he was surprised how little involvement artists actually had with record companies and vowed one day, if he got the chance, he’d have his own company that favored interaction with their artists.

I worked with some of their label people, including Gil Friesen, Michael Leon and Jerry Love, and truly, they loved the music and the artists. Their meticulous care and work made artists like Armatrading into major successes.

Despite the enormous success Alert had, he was in a relationship that was not working. Sergio Mendes’ lead singer, Lani Hall, was someone who immediately caught Alpert’s eye and ear and soon, they were together.

Alpert again enjoyed a massive, worldwide hit with his “Rise,” which is still played to this day.

Concurrent with all this, Alpert’s eye for art began to grow and he began to paint and sculpt. His work is quite amazing, as his paintings began to be exhibited everywhere.

Documentary filmmaker John Scheinfeld has made many documentaries over the years, many of which have centered on iconoclast artists including John Lennon (The U.S. vs. John Lennon), John Coltrane (Chasing Trane: The John Coltrane Documentary), Harry Nilsson (Who is Harry Nillson—And Why is Everyone Talkin’ About Him?), and, Rosemary Clooney (Rosemary Clooney: Girl Singer—Songs from the Classic Television Series”) as well as notable people in other fields. This latest, a documentary on Alpert, was inspired by someone close to his heart.

“It’s all my mother’s fault,” Scheinfeld says. “When I was growing up, she used to play Herb Alpert & the Tijuana Brass records all the time and she would dance around the house.”

The prolific filmmaker says he couldn’t help but be affected by the music that so delighted his mother, noting that the distinctive music that emanated from the famed trumpeter and his band was inspiring and uplifting. So, when he finally had an opportunity to make a film about the noted musician, businessman, artist and philanthropist, it was a no-brainer.

Scheinfeld notes, “Alpert’s story was unique in that he is one of the rare talents who emerged in the 1960’s with great success in a short period of time, and yet managed to survive the pitfalls of fame and fortune that so frequently crippled other music geniuses. He’s also one of the rare record label producers who is roundly beloved by the musicians he has worked with over the years as many of them attest in the film. Now, in his mid-80’s, Alpert continues to foster and support emerging artists through his Herb Alpert Foundation, in which he has given significant philanthropic support to educational programs in the arts nationwide, from the Harlem School of the Arts to the Los Angeles City College, CalArts and UCLA. To date, he has given away $150 million, and in support of the arts.”

And, Scheinfeld adds., “Nobody but The Beatles sold more records than Herb did during that time.”

It’s a bold look behind Alpert; a master musician and innovator, definitely recommended. Kudos to my friend Raquel Bruno was involved in the production.

NO TIME FOR BOND? — The next James Bond movie, No Time To Die, has been postponed from a theatrical release four times. It was reported over the weekend that MGM (who distributes the film) was in talks with Netflix and Apple TV about a possible release.

Netflix reportedly offered up $400 million, but the producers countered with $600 million. No Time to Die may have no time left to wait for theaters to reopen.

The next official release –and, definitely subject to change- is April 20201.

Per Roger Friedman/SHOWBIZ 411: “MGM is in a bind, too. They were counting on No Time to Die to generate gazillions. They were going to use that cash flow to give Respect, the Aretha Franklin movie, a big Oscar push. Now they’re in a cash crunch, and there’s been talk of moving Respect from its January 15, 2021 release date. With Jennifer Hudson eyeing an Oscar nomination, this would be a dreadful mistake. And really, at this point, why not just do it, give Daniel Craig a respectful send off, and plan a new Bond movie with Idris Elba — the one that audiences want so desperately? Makes a lot of sense.”

One wag posted a very disturbing opinion: Cinemas won’t be open before 2025. It will take about three years to saturate the public. After a vaccine is found.

SHORT TAKES — Joy Behar is threatening to leave the US if Trump wins? How can The View still be on the air? So, so tired that show …Watched that ABC 20/20 special on John Lennon. I tell you it still hurts. I was involved in the whole Apple Records-affair back then; met Allen Klein; Al Steckler; and Helen Seamen and suffice to say, all these years later it  still hurts. There was no May Pang in the special, but lots and lots of Jack Douglas, Earl Slick, radio’s Dave Sholin (who is a good guy) and, Bob Gruen. Nothing really new, but it still hurt to see it all again. I have to tell you, I have always been suspicious of people living too much off the past. I’m not saying we shouldn’t remember, but there’s got to be a line …

This Friday, author Andre Ginnane releases her next two Adventures Of Sal books, via Yorkshire Press,The Pet Playground in the Sky and The Super Hero Mobile. Ginnane does the Zach Martin podcast this Thursday …

Brad BalfourFebruary 14, 2022
Read More
Scroll for more
Tap
Rockers On Broadway: Band Together – Honoring Billy Porter Announces Joan Jett and the Blackhearts Have Joined The Lineup
What To Watch October 28th To Take Away The Blues