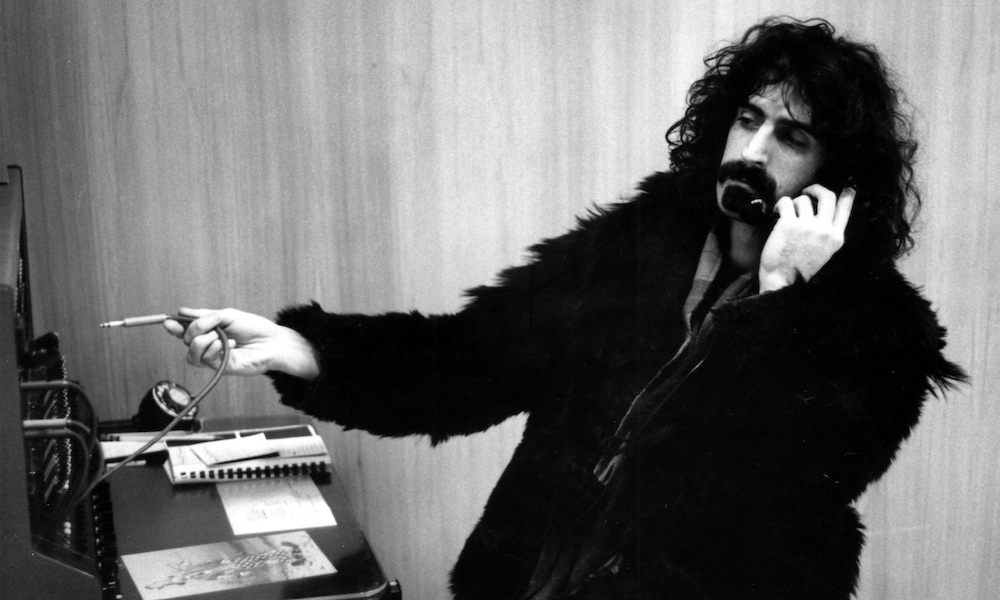 ZAPPA — A new film documentary on the incomparable Frank Zappa will be released over the Thanksgiving Weekend, and its first trailer is out. Here it is:

Billed as an intimate and expansive look into the innovative life of the iconic — and iconoclastic — musician and artist, the pic was made with unfettered access to the Zappa family trust and all archival footage. It explores the private life behind the musical career that never shied away from the political turbulence of its time, particularly when it came to the controversial practice of warning labels on recordings.

“Alex Winter has created an amazing documentary,” said Magnolia President Eamonn Bowles. “Zappa is an incredibly nuanced and compelling look at the visionary iconoclast and the environment that formed him.”

Added Winter, the former child actor who helmed the recent docu Showbiz Kids, “This is the most ambitious project I’ve ever worked on, with a couple years of archival preservation in addition to several years to make the film itself. This isn’t your typical music doc but rather a multi-faceted narrative that aims to bring this complex artist to life. Magnolia, with its long and distinguished history of platforming great cinema, is the perfect home for Zappa.”

Zappa, who lived down the hill from Micky Dolenz in Laurel Canyon, was a singular musician and voice throughout his long career. Heck, I remember an episode of Miami Vice “(1993’s Payback, where he played Mario Fuente, who dealt in weasel dust) that he appeared in … he was fantastic.

I also want to reference a great book from last year, The Hot Rats Book, with terrific photos from Bill Gubbins. A classic presentation for sure. This should be an awesome documentary.

HERE’S HAL — For the traditional curtain call at the end of Saturday’s episode of NBC’s Saturday Night Live, host John Mulaney came out wearing a black T-shirt emblazoned with the name HAL. It was a tribute to longtime SNL sketch music producer Hal Willner who died in April of complications related to COVID-19. He was 64.

Former SNL writer Mulaney was among a slew of former and current SNL-ers who were featured in a video segment honoring Willner, which aired on the show days after his death. Mulaney spoke of “wonderful friend” Willner in the video, in which everyone shared touching memories about Willner’s decades on the show. It also featured a music tribute to the song “Perfect Day” by frequent Willner collaborator Lou Reed as well as clips of Willner himself talking about his work.

I knew Hal for decades. Exemplary individual, encyclopedic knowledge of music; a visionary for certain … huge loss. Here it is:

SHORT TAKES — Did I just see actress Edie Falco (The Sopranos) do a commercial against Vito Bruno? Geeze. My have times changed. Truth is, Edie probably has attended more Bruno-events than she cares to remember … RIP Sean Connery at 90.

An awesome actor … always masterful! As good as he was as Bond … I loved him in his Oscar-winning role in The Untouchables (as Jimmy Malone). Simply spectacular. Huge loss. Check out GMA’s remembrance:

… Astor Place Haircutters, (aka Stylists) 70 years young, is about to fold. Very sad … “Pride Before A Fall” may be the title of the new Rolling Stones single – about you-know-who- but Project Grand Slam’s Robert Miller led the way with his exhilarating “You Can’t Tell The Truth,” off his forthcoming solo album Summer Of Love 2020. Take a listen:

… There’s another single from the re-mastered Kid Creole & The Coconuts debut album, Off The Coast Of Me: “Calypso Pan-American.” Billions of you may know (and, should know) that the album’s 40th Anniversary continues. This syncopated sizzler was written by the magical mulatto brothers, Stony Browder (RIP) and August Darnell and bristles with the energy that is Kid and the gang. It’s a damn shame that this anniversary offering (released in June) has been somewhat overlooked as this band has influenced so many artists, including Prince. Though the NY-band enjoyed more success in Europe; we’ve spoken to several international journalists who weren’t even aware about the anniversary release. Check out the lyric video for the track:

G. H. HARDINGApril 27, 2022
Read More
Scroll for more
Tap
What To Watch November 1st To Take Away The Blues
Music News: Lala, Andrew Lloyd Webber’s Cinderella: The Musical, I Put A Spell On You and If The Fates Allow: A Hadestown Holiday Album,