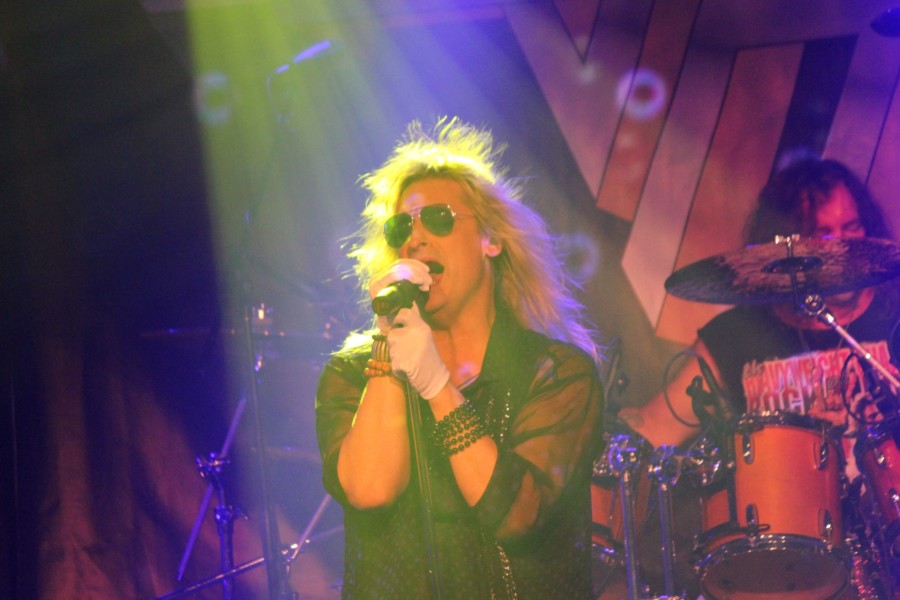 Per Buddy, “We performed 21 of Van Halen’s greatest hits. The Covid-compliant crowd was respectful and very receptive. It was a spectacular night … and, it felt great to be back onstage.”

Tribute-bands are the #1 form of live entertainment and Romeo Delight has an impeccable record; delighting fans and critics alike. They had shows scheduled for Steve Walter’s Cutting Room and My Father’s Place earlier this year, and a VH1 event, but they had to be cancelled due to the pandemic.

“We can’t wait to get back out here,” adds Buddy Here is two photos from the Birchmere show.

GOAT KEN JENNINGS — (Per Roger Friedman/SHOWBIZ 411) I’m a little bemused by the NY Post story today that George Stephanopolous wants to host Jeopardy! Maybe for a day, but George already hosts Good Morning America every morning on ABC and has to be available for the serious stuff on ABC Evening News. Plus, Jeopardy! is produced in Los Angeles with Wheel of Fortune. They’re a package.

So, seriously: sources tell me that Alex Trebek’s successor is likely Ken Jennings, considered the Greatest of All Time GOAT player of the game. Jennings was hired last January as a consulting producer to groom him for the job. My sources say everyone connected with the show, all the producers, “love him.”

It makes sense. Jennings is already part of the family. Since Trebek died, he’s expressed his deep sorrow and admiration for Alex. Trebek remains on the air with new shows through Christmas. My guess is that after two weeks of holiday reruns, Jennings will be announced as the new host in early January 2021.

So sad this Alex Trebek story. Born in Canada, he hosted a number of game shows, but one obit said his big dream was to be an actor and I bet he would have been superb. He was always a steadying force even when tension ran high on the show; and, I’m told it often did because of the competitive nature of it.

The show has some-35 episodes in the can with Trebek and will air them all. Inspirational for sure.

One other obit said he replaced Art Fleming on Jeopardy … and, I remember Fleming! Like that fab-McCartney line: I go back so far, I’m in front of me!

REGAL DOWN — (via Deadline) For all the headlines today that everything is coming up roses with exhibition after Pfizer’s good news about a COVID-19 vaccine, Regal Cinemas, will shutter the 18 locations the chain left open in New York and California, effective Thursday. Those sites will stay closed now with the rest of the U.S. chain until further notice.  We’re getting word from a number of distribution sources about Regal’s recent closings as they’ve received an official note from the chain. When Deadline reached out to Regal, we received no response.

Following New York State Governor Andrew Cuomo’s greenlight for movie theaters to reopen, Regal went ahead and turned the lights on at 11 sites in the Empire state on Oct. 23. Now, three weeks later, those will close down.

I hear that Cineworld made a go at reopening their cinemas in New York given how tough they were on Cuomo about reopening cinemas. On Oct. 9, Regal’s 42nd Street Cinema in New York City admonished Cuomo’s reluctance to open movie theaters with the marquee’s digital strip blaring, “48 states have reopened theatres safely. Why not New York, Governor Cuomo?” Now, I hear, Regal is telling distribution that they have to close down their 18 sites due to the lack of a robust theatrical release schedule, the same excuse they used last month. Many sources tell me that’s a mistake: It will cost the chain more to reopen and sends all the wrong signals to customers about whether cinemas have reopened.

SHORT TAKES — Terrific Andre Ginnane (The Adventures Of Sal) interview with Ray K. for Zach Martin’s NEW HD channel. Check it out here: https://newhdradio.com/newhdblog/1w4dyerbry76ei4mhxwjto0ib9aqgz … Thank God Fox’s Next came back Tuesday night – after a three-week break for the World Series. John Slattery rules! … Monday’s Rockers On Broadway event was simply stellar; but, one point must be made: The recorded music by the stellar band (led by Henry Aronson) was carefully synced with the video. Donnie Kehr and staff did just a spectacular job. Without question, the best remote-production I’ve yet seen since this madness started …

And, December 11 is the release date for McCartney III; and, they’re releasing it on cassette as well!

Suzanna BowlingJuly 24, 2022
Read More
Scroll for more
Tap
What To Watch November 10th To Take Away The Blues
Broadway Healing