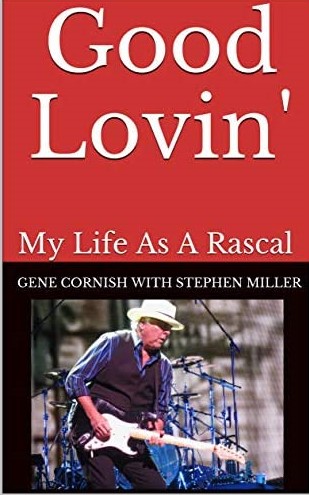 CORNISH’S LOVIN’ — We just finished Rascal-Gene Cornish’s Good Lovin (My Life As A Rascal), and just thoroughly enjoyed it. The music of the Rascals is timeless – CBS’ Bull just used it for their opener last week and it sounded just as good as ever.

Cornish’s memories of the group’s evolution is just terrific; besides being a great read, it’s a primer for the new groups on the way up (Harry Styles and One Direction if you will). Once The Rascals achieved worldwide success, the individual jealousies and frustrations began to build up and that’s when things got dicey. From The Beatles to Badfinger to even The Rolling Stones, it’s just a natural progression. Sad but true.

The group’s real first manager Sid Bernstein was a genius at promotion; face it, he brought over The Beatles, but was not as focused on other business dealings. Atlantic Records’ Ahmet Ertegun was a major supporter of the group as he placed them in the very capable hands of the late Arif Mardin and he proved to be the perfect producer for them.

I recall one day walking up Broadway in Manhattan and when I passed 61st street, and I saw Cornish standing there starring up at 1841 Broadway, where Atlantic Records was based and in the recording studio there, did much of their brilliant work (fyi-that entire building was recently torn own … for a new set of condominiums). That’s actually how I first met Gene. True story!

After the group unofficially broke up – and, that is indeed one strange story; they were reunited at the massive 40th anniversary party for Atlantic Records (at Madison Square Garden) and were placed next to Led Zeppelin in the progression of performers. I happened to have been there and It remains to this day, one of my best music experiences ever. The Rascals btw were awesome.

After a burgeoning substance abuse issue and Gene trying to organize other groups (Fotomaker), he found solace and a loyal-fan Steve Van Zandt, who mounted the terrifically successful Once Upon A  Dream play/musical on Broadway. The Rascals re-united and for a time, enjoyed it immensely.

Van Zandt had inducted The Rascals into the Rock and Roll Hall of Fame … dressed, incidentally, in the group’s early garb of knickers. Believe it or not, the group was knocked early on for their style of dress; but, it certainly caught people’s attention.

I don’t know why this book clearly didn’t get a proper release – there’s not even a publishing company referenced on the book jacket. It certainly deserved more; but, like the terrific Tommy James memoir, its appeal is somewhat limited. I loved it! Thanks to Tom Cuddy for sending it to me!

MASON’S ALONE TOGETHER AGAIN—Dave Mason’s Facebook Q&A last week was hosted by someone who supposedly is writing the Dave Mason-story for a book. Turns out he got several questions and facts wrong, including when he asked Dave how it felt to teach a masterclass session on guitar playing. Turns out he never did. I don’t recalls his name, but if and when the book comes out – buyer beware!

He also referenced Cass Elliot and seemed totally oblivious to the the fact that Mason cut a terrific album with Elliot back in the day with her and Paul Harris. This is my favorite track from a classic and totally overlooked album: “Sit and Wonder”

Guess he won’t get into the whole Blue Thumb Records fiasco – where some master tapes were suddenly missing! Too bad … I know the whole story. Guess Bob Karsnow’s ears must be ringing!

The Facebook-event was for Mason’s newly re-imagined Alone Together Again album. Also on the session was Bonnie Bramlett, who looked great, but throughout the session, bounced about, going in and out of camera. The two discussed the tour that Mason was part of – along with Eric Clapton and George Harrison. Bonnie said that even after the show which opened at Madison Square Garden, they played for hours together at the after-party. Mason said the whole tour was like an after-party. Hmmmm … that would have been something to have seen.

Old Pirate-Mason was at home in Reno and looked great, if a tad out of sorts, seemingly struggling to recall  certain facts. I mean, it was 50 years ago, so I understand it perfectly.

Would love to hear the  album, but since the album is on Mason’s own label, I doubt they’ll be any copies for us ink-stained wretches. We’ll see if Carla Sacks is doing the PR for this one too.

One of the best albums of the year we’ve yet heard is the debut solo album from Project Grand Slam’s Robert Miller, called Summer Of Lover 2020. Miller has already done exemplary work with PGS; their Trippin; album was #1 in Billboard on the Jazz Chart and his choice of rock-classics to re-imagine has been superb. He’s done The Who’s “I Can’t Explain”; the Kinks “You Really Got Me”; and, Cream’s “I’m So Glad.” Miller, who was actually the famed Woodstock festival, is a rock-and-roll fan of the highest order and his work on Summer Of Lover is his best effort yet. Stay tuned for more on this one …

Looking forward to listening to Elton John’s just-released Jewel Box. I hear its superb … And, The Oxfords still #1 on Amazon!