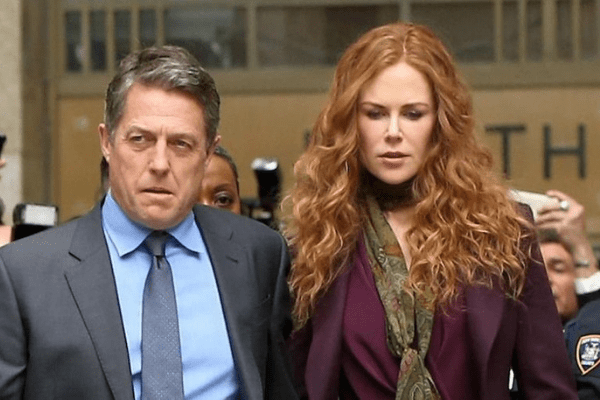 ONE DOWN FOR HBO’S THE UNDOING — I watched Sunday’s penultimate episode of their The Undoing, and even though Hugh Grant’s character Jonathan (now on trial for murder) never revealed his thoughts on the murder (which he had promised to do in the previous episode) it was a good episode. Per usual, another tantalizing clue was revealed in the final moments of the show, but with all the cloak-and-dagger machinations, the whole story’s just one big whodunit. Frustratingly watchable for sure. HBO’s guilty pleasure until Succession comes back if you ask me.

Reading some viewer’s posts, it seems that now, anybody in the cast could have done it. We’ll see next Sunday.

Donald Sutherland, so brilliant in last week’s episode, was just seen once or twice and wasn’t even given any dialogue in this EP. Kind of odd if you ask me considering his bravura performance only a week ago.

GRAMMY BLUES — The Weekend was totally snubbed by the Grammys. No nominations at all for his album, After Hours, or any of the hits on it. And, nada for Bob Dylan too. His Rough and Rowdy Ways album was IMO, a classic.

Every prognosticator of the Grammys predicted The Weekend would win Best Album and be nominated in many categories. He didn’t even get R&B nominations. After Hours omission is a scandal. The album sold 1.8 million copies including streaming, nearly 500,000 CDS and downloads.

Also, Alicia Keyes was omitted too.

Lady Gaga’s Chromatica album picked up a few nods but not Album of the Year.

Coldplay, whose 2020 album sold poorly and quickly disappeared from the charts, got an Album of the Year nod.

A pivotal winner in the nominations is Brittany Howard, from the terrific group Alabama Shakes. Her solo debut album, a sales flop, had several nods and deservedly so.

Adds colleague Roger Friedman of Showbiz 411, “The rock category is a total embarrassment. Rock has been so diminished that the nominees barely matter. Many of the “lesser” categories are from people never heard of. It’s quite amazing. If the Recording Academy was going for diversity they also delved into the unknown.”

The Grammys are now a joke. Once, they were a true honor – now, not so much.

And, by the way: whatever became of Deborah Dugan?

IS IT ANY WONDER? — Veteran acts such as Fleetwood Mac, Queen, Creedence Clearwater Revival and Bob Marley are outselling most of the pop acts currently in the USA.

The two biggest physical releases in the USA last week were AC/DC’s Power Up with 114,445 physical sales and Chris Stapleton’s Starting Over with 75,076 physical sales.

Next to no-one is actually buying albums by Future & Lil Uzi Vert, Pop Smoke, Juice WRLD, The Kid Laroi, Lil Baby, King Von and 2 Chainz. They are listening but not buying meaning there is no fan base development.

Don Henley said it best eons ago … most of the people making music aren’t musicians. And, he’s right; they’re one-hit wonders …. gone in a flash.

Veteran PR-man David Salidor explains: “In years past, record companies had departments devoted to artist development. That’s why artists like Fleetwood Mac, Creedence, The Doobie Brothers, and Bob Marley are still selling. I think these days, it’s a trickier dynamic between artists and record companies; the companies are a tad too eager for that one-hit wonder and honestly, the companies are not adequately equipped to really develop an artist. Times have changed.”

SHORT TAKES — Monday was the 15th anniversary of the film Rent. Still to me, one of the greatest events ever to hit Broadway. Just extraordinary … As predicted, Jeopardy-winner Ken Jennings will be the first-guest host for the late Alex Trebek. Congrats …

Three wealthy  patrons of the infamous Astor Place Haircutters, have stepped forward to fund their moving forward. They will not close. I don’t know who the patrons are, but this is terrific news. Bravo!  … Much chatter about the City Winery’s new policy: A $50.00 COVID test prior to entering the establishment. Apparently, the test will take a half-hour for the results. Interesting tactic … but, is it prudent long haul? I’m quite certain that liquor and food prices will skyrocket as well … and, I’m not against that, but is it realistic? And, how will the performers be protected?

Still many questions … Can it really be 29 year’s since Freddie Mercury passed? His work with Queen is more popular than ever … RIP David Dinkins.

G. H. HARDINGApril 27, 2022
Read More
Scroll for more
Tap
What To Watch November 24th To Take Away The Blues
What to Know About The 94th 2020 Macy’s Thanksgiving Day Parade