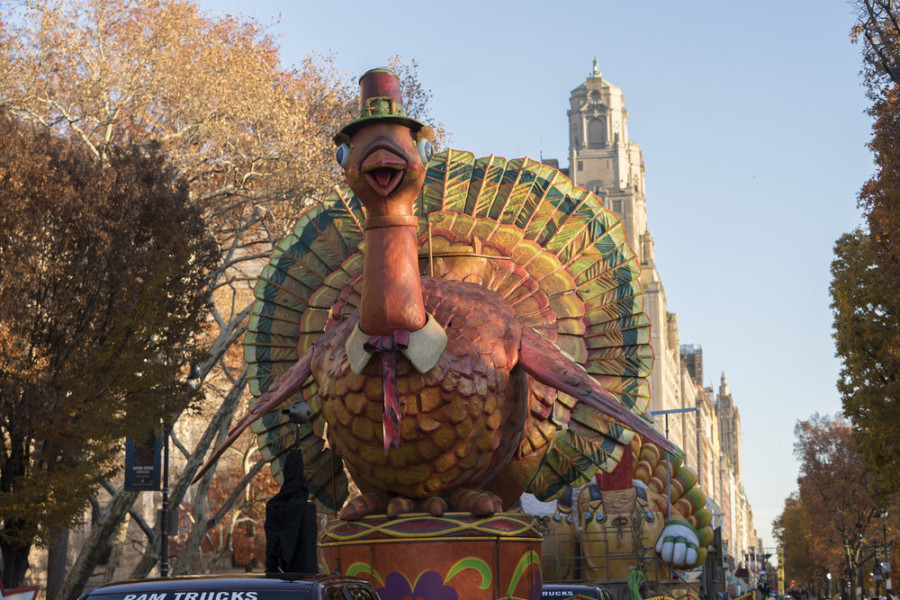 MACY’S — You have to hand it to Macy’s – they pulled off their 94th edition of their Thanksgiving Day parade in admirable style … all things considered. Face it, this year has been a bust and next to cancelling New York’s Eve in Times Square; the annual Macy’s fete just had to go on in some fashion! The amount of ground personnel was scaled back – some 88% so.

Clearly, most of the performances were taped in advance and boy, all the singers kind of looked and sounded the same. Not to be nasty, but today’s music really is in the dumps. The gorgeous Sofia Carson was however, the most impressive, although her backing track was barely a whisper and the other singer Karol G didn’t even try to lip-syncing properly. It was pretty embarrassing. They should have bitten the bullet and invited last-year attendee Debbie Gibson back. She was joyous!

To tell you the truth, the one act that really impressed was one of my favorite bands the Goo Goo Dolls featuring John Reznick. Reznick is a amazingly talented performer – think of “Iris” from the 1998 movie City of Angels. He was simply terrific. To me, the star of the parade.

BELUSHI — I think the John Belushi story is pretty well known. I knew him and hung out with him and Bob Woodward’s book Wired, to me, perfected captured his manic genius all too well. I actually went back to re-read the book several years ago and it was as unsettling as it was when it first came out in 1984.

John was a genius for sure; but with that genius came a high degree of paranoia and unhappiness fueled by mountains of illicit substances. Once he made it big time … the powers that be only wanted him to repeat that character over and over. Imagine doing that character from Animal House over and over … it got to be exhausting for him.

RJ Cutler’s documentary which premiered on Showtime  a week ago was good, but had something I’d had never really seen in a documentary before: lots of high octane animation … not unlike the last episode of NBC’s Blacklist which featured almost-comic-book like drawings. Most of the interviews were done over the phone and the voices would often fade in and out. It seemed to me, his cronies wanted to talk, but only in limited doses.

Of all the interviewees, SNL’s Lorne Michaels seemed the most defensive,. Michaels saw something in Belushi that was brilliance … but, he also knew it’d shortly burn out. Also admirable, was talk of National Lampoon’s Lemmings, which Belushi (and, Chevy Chase) starred in at the Village Gate in NYC – now Le Poisson Rouge. Great memoirs for sure.

The interviews were an interesting array of Beluishi-accomplices; Dan Aykroyd; Lorne Michaels; Mitch Glaser; no Bill Murray; and, Rose Shuster (Michael’s first wife); but also past old interviews with the likes of Penny Marshall and Carrie Fisher, who dated Aykroyd early on. Let’;s just say that John and Carrie got on like a house on fire!

Also, the Blues Bar in NYC was one-of-a-kind. Studio 54 may get the ink, but that Blues Bar was something else. Mick, Keith, Francis Ford Coppola, Nicholson … they were all regulars.

Beluhsi’s final days in Hollywood before he passed were sort of glossed over too. Missing were the facts that Robert DeNiro and Robin Williams were regular visitors to Belushi’s bungalow at the Chateau Marmot.

Sketchy for sure (no mention of drug moll Cathy Smith)… but, if you really didn’t know who Belushi was, or what he did, this will tell the story well.

For me, scary memories for sure.

SHORT TAKES — The 400th episode CBS’ NCIS aired Tuesday and it was a pretty good episode. I remember watching Mark Harmon on St. Elsewhere (1982) eons ago. He and David McCallum are starting to look a little long in the tooth, but, a great episode nonetheless … Mark Strausman, the chef best known for heading the kitchen at Barneys restaurant Freds, has opened his newest venture, a new American restaurant called Mark’s Off Madison at 41 Madison Avenue in NYC. CNN’s Jeff Zucker checked it out last week and PR-pasha David Salidor was seen there as well …

Mark Bego’s East Like A Rock Star was released in paperback last week and immediately charted on Amazon’s Top Ten. Congrats … The latest Donald Trump press conference (hopefully one of his last ones) was at a little desk that pundits across the world had a lot fun with. To me, it was Trump’s Little Desk series – no shade on NPR’s little desk concerts. Too funny. My God, his legs could barely fit under it … And, just a terrific Ray K. interview (for Zach Martin’s NEW HD channel) with Project Grand Slam’s Robert Miller – who is about to release his first solo entitled Summer Of Love 2020. Bravo! Check it out here: