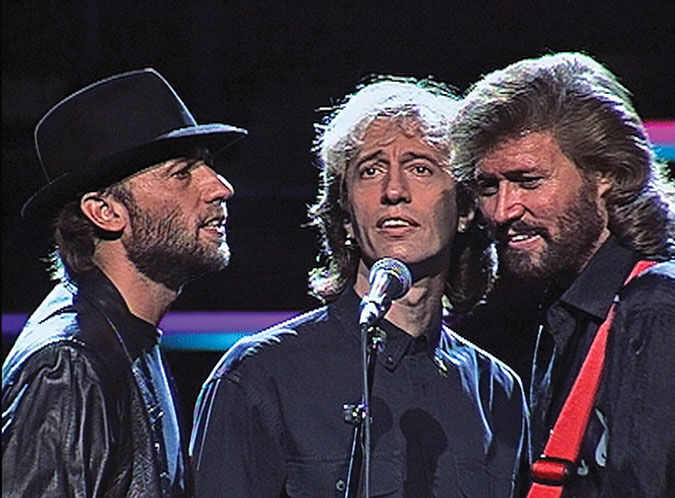 BROTHERS GIBB —HBO’s How Can You Mend A Broken Heart – shown over the weekend on the cablenet about the Brothers Gibb was simply spectacular. I’ve sogged through all the major rock-docs over the past several years and this Frank Marshall-helmed one shot right to the top of the list.

I became a Bee Gees fan when they did “Massachusetts” in 1967. I was immediately hooked by their exquisite three-part harmony. I think the interviews with everyone from the late-Arif Mardin to RSO/Robert Stigwood aide de camp Bill Oakes were just marvelous. I had known for instance that Oakes was charged with putting the soundtrack together for Saturday Night Fever … but, hearing how he did it was terrific. It was also great to hear Eric Clapton, of all people (Stiggy was the manager of both Clapton and the Gibbs), who had suggested to Barry Gibb they record in Miami, where he had recorded his infamous comeback album 461 Ocean Boulevard. Clapton jokingly says he takes credit for all their success!

It was funny hearing Oakes said that when they all arrived, at the same house where Clapton stayed in Miami, they spent the first few hours taking pictures … mimicking the Clapton album cover. And, just for the record, what a brilliant record 461 was! And, still is.

It was also interesting to hear how Brian Epstein, who they had first approached, paired them with Robert Stigwood, as Stigwood was Australian. When Epstein passed away, he took over management of the brothers.

Barry, is the sole survivor of the brothers now and watching him reflect on the passing of Maurice and Robin was quiet moving. Barry, who in their heyday, was without question the most striking of the three visually, has aged tremendously and now looks, not well. Watching him roam his compound in Miami was both haunting and sad.

For me, the high points of the docu were when producers Albhy Galuten and engineer Karl Richardson describe how they created a tape loop for the song “Staying Alive.” The sound they were able to create nailed the song and is something that still happens today.

Also, the famous story of how Arif Mardin (“Jive Talkin’) asked Barry if he could sing in that falsetto (while recording their grand “Nights On Broadway”) is retold. Barry even admits that that night, their careers changed. Also, when Atlantic Records chieftain Ahmet Ertegun first heard the song it was titled “Lights On Broadway.” Ertegun encouraged them to get a bit more down-and-dirty with the title – hence, “Nights On Broadway.”

After the disappointing takes from Echo In The Canyon (how can you leave out Joni Mitchell?) and Laurel Canyon, this was a long overdue surprise. Just an phenomenal effort … must see for sure.

ZACK’S LEAGUE — (Via Deadline) Zack Snyder’s upcoming new cut of Justice League has changed so much, he believes the four-hour opus will be rated R.

“The movie is insane and so epic and is probably rated R — that’s one thing I think will happen, that it will be an R-rated version, for sure,” the filmmaker revealed in an interview with EW. “We haven’t heard from the MPAA, but that’s my gut.”

How does the PG-13 movie, which is expected to be dropped in episodes next year on HBO Max, get to a R rating?

Per Snyder, Ben Affleck’s Batman uses the F-word in one scene, Cyborg speaks his mind, and bad guy Steppenwolf is pretty violent “hacking people in half,” says Snyder.

The Warner Bros filmmaker was asked about the elephant in the room — that being the studio’s audacious theatrical-HBO Max day-and-date release strategy for their 2021 slate. Coincidentally, Snyder says the studio is looking to release his cut in theaters.

“It felt like a pretty bold move and that maybe the implication wasn’t 100 percent thought out,” he told EW of Warners’ slate decision. “I feel like there are a lot of people panicking during COVID. I hope that, in the end, that’s what this was — some sort of knee-jerk to COVID and not some sort of greater move to disrupt the theatrical experience. I thought we were kind of already getting very close to the ideal theatrical window where you still had marketing material out there and you hadn’t forgotten about the film by the time it came out on DVD or streaming. I thought we were starting to hone in on that sweet spot, but this kind of throws a monkey wrench in the works.”

Justice League, which cost $300M, and which Snyder had to step away from during filming due to a family tragedy, wasn’t exactly Avengers at the box office, grossing $658M. Joss Whedon took over and allegedly that’s when things got rocky on the set, according to Cyborg actor Ray Fisher who called out the director on social media this past summer saying his “on-set treatment of the cast and crew of Justice League was gross, abusive, unprofessional and completely unacceptable.” Fisher called on WarnerMedia to conduct an investigation of what went down, which they recently concluded, and noted “remedial action has been taken.”

Warner Bros had no comment in regard to Snyder’s comments on Justice League‘s possible R-rating and theatrical release. Nothing official just yet.

SHORT TAKES —-Nutjob Bob Lefsetz did his own take on the Bee Gees doc – talking about taking a girl to see Saturday Night Fever on their first date. Bob, we don’t really care. Geeze, Lefsetz has become the Brett Winterble of print. Please Sir, it’s time to vacate the premises … The cover of this week’s New York Magazine had small drawings of all the restaurants that have closed. Too sad … Am hearing great early reports on Tom Hanks’ next, News Of The World, directed by Paul Greengrass, who did the terrific movie Captain Phillips with Hanks. Industry screening next Monday …. details to follow …Happy Bday Alison Martino!