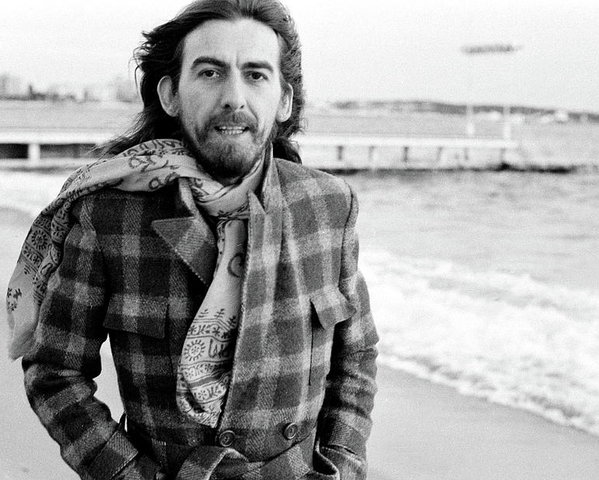 MICHAEL PUTLAND RIP — Photographer and photo agency founder Michael Putland has died at 72. He died peacefully at home in the U.K. after a short illness. His Retna photo agency was established in 1977 by Michael – the photo collection includes celebrities and pop culture icons, along with fashion and event images from the 60’s to early 80’s. It includes rare early photos of the Beatles, Led Zeppelin, Rolling Stones, Bob Marley, Elton John, David Bowie, ABBA, KISS, Bruce Springsteen and hundreds of other major performing artists, as well fashion models including Heidi Klum and other celebrities and icons.

Here are two of his photos, the first with George Harrison in Cannes and simply a stunner of George Michael. I first met Michael decades ago when I was toiling for an English-based record company. Totally delightful and what a terrific photographer, he’ll be missed. RIP Michael.

SHAKE IT OFF — While Sunday’s American Music Awards (AMAs) declined to a low in the key ratings demo, the annual special avoided its smallest-ever overall TV audience. That, despite featuring even more Taylor Swift than last year.

The 2019 AMAs posted a 1.75 rating/7 share among adults 18-49, down a bit from last year’s 1.82 rating — the awards show’s previous record low. Of course, both years round to 1.8s if going out to one decimal place, so whether it matched 2018 or fell shy depends on how deeply you look into things.

Unfortunately for Swift and all the night’s other honorees, Sunday was again dominated by football. That’s just how it goes.

It just goes to show you that despite all the headlines about Swift, Scooter Braun and Big Machine Records, it just did not translate into ratings gold.

Cher, of all people, tweeted last week that’s Swift’s troubles aren’t nothing new … she said they’ve been going on for decades. As a lifelong toiler in the field, she’s right. But don’t forget that when Swift was a nobody, Big Machine advanced her the monies to record and to start to become what she is today.

For a full look at what the record industry did and still can do, read Tommy James’ no-hold-barred memoir. It’s disturbing at every turn (and, probably good most of the folks written about are long gone) but that’s what the music industry is all about.

SHORT TAKES — I’m not a huge fan of either The Voice or American Idol, but I had the Voice on in the background last night and heard two contestants, within scant moments of each other, do “Without You,” the Harry Nilsson /Badfinger song; and, Paul McCartney’s “Maybe I’m Amazed.” Both brilliant, but what amazing choices for such newcomers. As Sirius’s Steve Leeds always says: a good song is a good song. Good music will survive … The Today Show’s Al Roker embarrassed himself yet again today, when he interviewed the original Banana Splits from TV; fresh from a session at a Chiller show and he and casually mentioned “one has transitioned … and, is now known as Ann.” Poor Al … Bassist Dave Holland and guitarist John Scofield at NYC’s The Blue Note were just sublime. What musicianship; just in awe. A mellow Tuesday night in NYC for sure …

Photographer Nina Wurtzel was on-hand for Donnie Kehr’s Rockers On Broadway earlier this month. The shots here (Michael Cerveris; Constantine Maroulis and Alexa Ray Joel and Christie Brinkley) just stood out. She successfully captured the excitement and energy of that night …

I worked at the legendary Sam Goody’s for years (EJ Korvette’s too) and I came across this article fromMental Floss, on the secrets of Sam Goody’s. Now, I actually know  dozens of others who did too, so take a look at this:https://www.mentalfloss.com/article/533410/sam-goody-facts …On November 26, 1999, the very first Forgotten Hits Newsletter went out by email to a select group of 35 readers … people Kent Kotal had met in the AOL Oldies Music Chat Room. They’ve grown a bit since then … Congrats Ken Kotal for a must-read (www.forgottenhits.com) … Seems like we’ve spoken about several photographers this time out.

Look at this new photo from Project Grand Slam’s Robert Miller at NYC’s The Groove. Fantastic! Miller and PGS are back there December 8 … And,  J. Robert Spencer will be in New York as of December 9. His sensational Christmas single “Waiting On Christmas” is shaping up as a major entry. Bravo!

Suzanna BowlingMay 15, 2022
Read More
Scroll for more
Tap
Saks Fifth Avenue Puts on Holiday Display as Window Are Revealed and Idina Menzel Performs Show Yourself from The New Frozen Film and See it Through Earthcam
7 Facts About Online Gambling