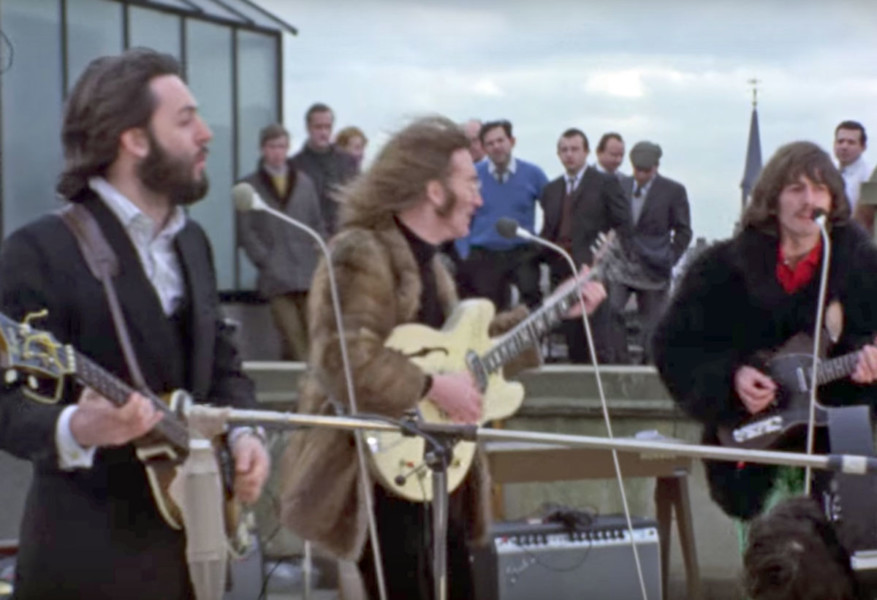 MACCA’S ROCKDOWN — If we ever make it out of this pandemic, it’ll be interesting to look back with a fresh eye towards what was created during this horrendous time. Dylan’s Rough and Rowdy Ways – besides being my album of the ghee year- was a thoughtful, respectful and downright intriguing album in so many ways. Paul McCartney’s McCartney III is indeed an old down-home record for sure and, totally irresistible.

It definitely does not evidence the sheer innocence of McCartney I (50 years ago!), but rather clearly emulates Macca’s Ram album. It surely was frustrating for even McCartney not to tour and be-sidelined at home. Of course, with his resources, it was probably more like a paid-vacation, with a full-blown studio and workers bees at his beck-and-call.

Ringo Starr released a new song -by Diane Warren of all people- that featured numerous marquee names – from Lenny Lravitz and Sheryl Crow on down – and, while it’s entertaining, it’s a tad too schmaltzy for my taste. It’ll get airplay for sure, as will his follow up album Zoom In, but, beyond that, I wouldn’t expect a gold or platinum reception. I’ve always loved Starr, but his recorded work of late falls all to easily into the yacht-rock category to me.

Macca’s still shooting for the heavens and I have to say that with repeated listening’s, McCartney III is a diamond in the rough.

McCartney sounds weathered – as he should at 78, but he’s still pushing the envelope and I think genuinely trying to keep reaching for that brass ring.  Track 4, “Women And Wives” jumped out at me and I think it’s one of the best things he’s ever done. Wise and winsome, it’s just a sensational track. Just him and piano. Awesome for sure. To me, the equivalent to Dylan’s masterful “Key West” track off the latest Dylan album.

“Pretty Boys,” “Seize The Day” and “Deep Deep Feeling” are standouts as well as they immediately resonated with me. “Feeling” in fact, the more I listened, just knocked me out. Sure, there’s multiple synthesizers and all, but a tremendous track.

A late-in-the-year masterpiece for sure. Kudos Macca!

LET IT BE AGAIN — When director Peter Jackson dropped a montage of clips from his re-stored Let It Be movie earlier this week; most of the music world went into a dizzy, miss tizzy.

It’s a 5:49 preview of essentially Jackson changing the feel of the original Let It Be movie; which was, a bird’s-eye view of The Beatles breaking up.

I’ve said before, for me, this revisionist history of sorts, seems a tad too manipulative to me. Sure, Michael Lindsay-Hogg’s original picture might have been too close a view of what was going on, but this new trailer (even though Jackson’s claims in an opening moment, not a trailer) is essentially the four of them, smiling in each and every scene. There’s Paul and John dancing; Yoko and Linda laughing; Ringo making funny faces for the camera; and, George in a dazzling array of colored suits. It’s almost like a 60’s-sitcom.

I had friends who worked for their Apple Records back then, here and in the UK, and I know first-hand the concerns of exactly what was happening in the group. Believe me, it was a very cautious time for all involved.

The famous scene of Paul telling George what and how to play in the original one … I wonder if it’ll be in the new one. That whole scene was, most telling. John and George aren’t here anymore; and, it’d be interesting to get their take on this whole affair.

Interesting report in the UK’s Daily Mail this week by Ray Connelly, of all people. The 80-year old Connelly was for years the music-go-to-guy for the London Evening Standard and The Daily Telegraph. He also wrote the screenplays for both That’ll Be the Day and its sequel Stardust.

NEW CLASSICS — The Recording Academy knows when to hold ’em, where it’s fun to stay and that there’s a choice we’re making. Kenny Rogers’ “The Gambler,” Village People’s “Y.M.C.A.” and USA for Africa’s benefit single “We Are the World” are among the 29 songs and albums added to the Grammy Hall of Fame today.

“We are proud to announce this year’s diverse roster of Grammy Hall of Fame inductees and to recognize recordings that have shaped our industry and inspires music makers of tomorrow,” Harvey Mason Jr., chair and interim president/CEO of the Recording Academy, said in a statement. “Each recording has had a significant impact on our culture, and it is an honor to add them to our distinguished catalog.”

Ronstadt scored a double from the Recording Academy today. Along with her Spanish-language disc, she also was recognized for Trio, the country album she made with Dolly Parton and Emmylou Harris. Like Canciones de Mi Padre, it was released in 1987.

Kansas Joe and Memphis Minnie’s “When the Levee Breaks” and Vernon Dalhart’s “Wreck of the Old 97” — the original versions of songs made famous by Led Zeppelin and Johnny Cash and others, respectively — also made this year’s cut.

Here is the full list of 2021 Grammy Hall of Fame inductees:

RANDY ALEXANDER — I knew about it for months, but yesterday, it was revealed by his son Harrison that PR-man Randy Alexander (Randex Commuinications) is in the fight of his life with late-stage pancreatic cancer.

Randy’s work with Gamble and Huff; Honey West; Kreskin;The Bobby Rydell launch party;  and The Light of Day program was impeccable. I recall being invited down to Fishtown in Philadelphia, where Randy handled the PR for the opening of The Fillmore Philadelphia. He even brought in PR-pasha David Salidor from NYC to assist. It was a great night, as Hall & Oates officially christened the new venue. Salidor adds, “A terrible tragedy. Randy’s work was exemplary. The media loved him, which is not always the case.”

A GoFundMe page has been started to help with the expenses. Check it out here:

A good man for sure; prayers for sure.

SHORT TAKES — On this date in 1970, December 23rd – Joni Mitchell receives her first Gold Album Award for Ladies Of The Canyon … Michael Friedman’s SKOPE picked up the story on The Oxfords, Check it out here: https://skopemag.com/2020/12/22/return-of-the-oxfords … Look for Micky Dolenz’ next, solo album Dolenz Sings Nesmith in April on 7A Records … Happy BDay Art Rutter!

G. H. HARDINGSeptember 14, 2022
Read More
Scroll for more
Tap
What To Watch December 23rd To Take Away The Blues
Tribute To Rebecca Luker