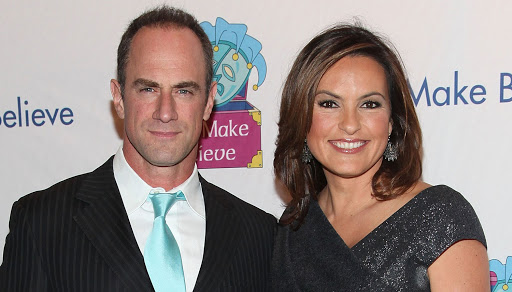 LAW & ORDER TEASE — (from Deadline) The big tease was on today for Law & Order: SVU, as star Mariska Hargitay and former costar Chris Meloni provided more selfie evidence about his highly anticipated return to the series.

Meloni struck first on Instagram, posting a black and white shot of him Hargitay with the caption, “We are a little bit closer.” That was followed a few hours later by Hargitay, who posted a color shot on Instagram proclaiming, “Now even closer,” with the hashtag “#EO.”

Meloni is expected to return for a guest shot in his former role as Eliot Stabler. It’s a prelude to the debut of his own franchise vehicle, Law & Order: Organized Crime, and marks his first guest shot in the Law & Order universe since leaving the show nearly a decade ago. In the show’s world, he retired. In real life, contractual matters intervened. Apparently, all is forgiven.

Meloni and Hargitay were original cast members for SVU, which began airing in 1999. Meloni left the series in 2011. Hargitay and Meloni was partners in the show, but never romantic interests.

Fans were also teased last year about the return when Meloni showed up in virtual table read helmed by Hargitay and showrunner Warren Leight.

I guess Dick Wolff and company are indeed going to mail every possible bit of ink they can regarding the Meloni-reunion. Face it, Dick Wolf is a notorious tight-wad. What originally happened with Meloni, also occurred with Vincent D’Onofrio in the brilliant Law & Order: Criminal Intent.

At least, Intent’s showrunner Warren Leight, is the showrunner for SUV. Wolff’s tricky … like a fox.

The reunion will apparently be teased on SUV … and, I’m wondering how good it will be. Rumors circulated last week that Wolff and Leight were in a very heated meeting over the script …with Wolff doing most of the yelling.

If handled correctly, it could be one of TV’s more memorable moments. For me, I think Leight can deliver. Stay tuned.

TIM BOGERT RIP — Tim Bogert, a legendary bassist best known as part of the bands Vanilla Fudge, Cactus and the trio Beck, Bogert & Appice, has died of cancer. He was 76.

”Acclaimed bassist and rock musician Tim Bogert died on Wednesday, January 13th, after a long and valiant battle with cancer,” their statement reads.

“Tim was a one of a kind bass player. He inspired many, many bass players worldwide. He was as masterful at shredding as he was holding down a groove, and Tim introduced a new level of virtuosity into rock bass playing,” Appice wrote. “No one played like Tim. He created bass solos that drove audiences to a frenzy every time he played one. And he played a different solo every night. He was the last of the legendary 60’s bass players.”

Bogert formed the rock band Vanilla Fudge in the 60’s with Appice, Vince Martell and Mark Stein. They recorded five albums between 1967 and 1969, which included their hit covers of the Supremes’ “You Keep Me Hangin’ On” and the Beatles’ “Ticket to Ride.” In 1970, Vanilla Fudge disbanded and Bogert and Appice briefly created Cactus along with guitarist Jim McCarty and vocalist Rusty Day. However, the group soon disbanded in 1972, and Bogert and Appice teamed up with guitarist Jeff Beck to form the power trio Beck, Bogert & Appice. They produced one self-titled album in 1973 and disbanded the following year.

Bogert then joined Bobby and the Midnites, a side project formed by Bob Weir of the Grateful Dead. Though he toured with the group, Bogert left before their debut album was released, joining the U.K. group Boxer in 1977. In 1981, Bogert became a faculty member at the Musicians Institute in Los Angeles, but continued to record, releasing his second album, Master’s Brew, in 1983 and releasing Mystery with Vanilla Fudge in 1984.

In 1999, Bogert was recognized by the Hollywood Rock Walk of Fame for his contributions to the genre. Bogert continued to tour with various groups until 2009, when he retired.

Vanilla Fudge was one of those bands that were inescapable in the 60’s. Once the band scattered, you sort of lost track of them. That Beck, Bogert and Appice album was amazing; but, until Fudge re-grouped … nada.

I worked with the Fudge for a time and though they were great, Bogert was amazingly quiet, yet played a mean bass. And, Appice, he liked to talk a lot about his time with Rod Stewart and Ozzy Osbourne’s wife. But, a superb stick-man for sure.

Yet, when Fudge hit the stage, their music was miraculous. I always felt the right producer (George Martin?) could produce for them a masterpiece. RIP Tim!

SHORT TAKES — WOGL/Philadelphia welcomes air-personality Race Taylor for middays as part of a lineup shuffle. Taylor will continue to be heard on sister stations WCBS in NYC and KLUV in Dallas. One of radio’s more dynamic hosts, Taylor says, “I’m very excited to now be part of the rich history at 98.1 WOGL in Philadelphia – WOGL is such a fun and legendary Philly brand and I’m happy to be able to join this incredibly talented team. I’m bringing all of the brotherly love” …

As a nice PS to our above post on the Law & Order universe:  Annabella Sciorra will bring her Law & Order: Criminal Intent character to Law &Order: SVU this season, according to TV Line. Sciorra played Detective Barek, a Major Crimes officer and partner to Chris Noth’s Detective Mike Logan, in Season 5 of Criminal Intent. She left at the end of that season, which aired in 2005-2006; and, in a later episode, hinted at tension between Logan and his former colleague. All these years later, Barek is now a lieutenant in the Bronx Special Victims Unit. She’ll show up on SVU when she forms a join task force with Capt. Olivia Benson and the Manhattan SVU to hunt down a series rapist who has struck in both boroughs … Just learned that LA-music manager Terry Lippman has passed from ALS.

Terry worked with his brother Michael with the likes of George Michael, Rob Thomas and Matchbox 20, among others. I hadn’t seen him in years, but always enjoyed his hospitality and knowledge. A true gunslinger (in the best sense) and a one-of-a-kind guy. He will be missed , Here’s a shot from the 80’s with Debbie Gibson and Mr. Michael; great memories for sure … HAPPY BDAY Joel Carvello!