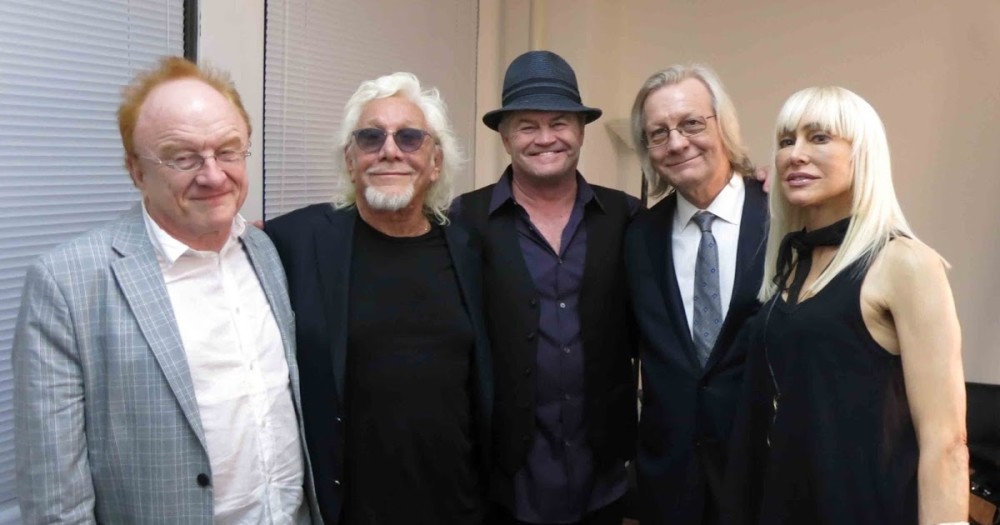 Kerr, who has already spent more time on-air in mornings in the market than anyone, will remain in place through 2026. Kerr began his run in mornings in the market at the age of 21 in 1974. Kerr was first paired with longtime co-host Shelli Sonstein in 1977 and would remain at 95.5 WPLJ until 1989. After stints in mornings at Hot AC Mix 105 ;Smooth Jazz CD 101.9 ; WQCD;  Country 103.5 WYNY; and the Y107 quadcast,; Kerr joined WAXQ in January 2002 and was reteamed with Sonstein the following year.

Prior to coming to New York, the Michigan native also worked at WDAI-FM and WLS-FM Chicago; WKNR-FM  Detroit, and WORJ-FM Orlando starting his radio career at the age of 14.

Here’s the official statement: Kerr is the longest-running morning radio personality in New York City history. He has been the morning show host on six New York City stations, most notably 18 years at Q104.3 and 15 years at WPLJ-FM, where he became New York’s youngest morning show host at 21 years old. Before that, Kerr served as an on-air personality at WDAI-FM and WLS-FM in Chicago and at WKNR-FM in Detroit, Michigan, after serving as an on-air personality at WORJ-FM in Orlando, Florida. His relationship with radio started on a second-grade field trip to WWJ-FM in Detroit. Kerr began his career at age 14 in Ypsilanti, Michigan and has been on the air ever since.

“When I joined Q104.3, my biggest hope was that it would be the second-best job I ever had,” said Kerr. “As things worked out, it has turned out to be the best.”

Active for decades in civic and charitable affairs, Kerr is a 35-year board member of HeartShare Human Services of New York and a member of the SAG-AFTRA Foundation board. He’s also a Vice President of the Screen Actors Guild-American Federation of Television and Radio Artists.

I’ve known Jim for years and without question, he’s the real deal. With an encyclopedia-like knowledge of music, he’s a major asset.

PR-pasha David Salidor said, “I’ve known Jim for years; he was instrumental in breaking Debbie Gibson, who we worked with, and has been our guest announcer for almost every Micky Dolenz show in NYC. A great and loyal friend to many, many artists. It’s no wonder he’e been such a vital presence on the airwaves for this long.”

The opening is a shot of Jim with Micky Dolenz at Dolenz’s premiere show at NYC’s 54 Below; L-R: Peter Asher; Bruce Grakal; Dolenz; and, Carol Miller, also at Q104.3. Congrats Jim!

Trebek was not forgotten as Jennings’s stint drew to a close.

“That’s a wrap on my six weeks of @Jeopardy guest hosting,” Jennings wrote in a tweet. “Thanks for watching, thanks for your patience with a tough learning curve…and, as always, thank you Alex.”

Trebek died on Nov. 8, and all-time Jeopardy! champion Jennings was the first of several guest hosts to take over the quiz show while a permanent replacement is sought.

It’s goodbye but not adieu for the 46-year-old Jennings, who will serve as a consulting producer on the show. He revealed in a tweet on Friday that guest hosts of the future include Dr. Oz, NBC News anchor Savannah Guthrie, CNN anchor Anderson Cooper and CNN Chief Medical Correspondent Dr. Sanjay Gupta.

Jennings set the record for longest winning streak in the game’s history. His 74 consecutive wins earned him $2.52 million. He won the Jeopardy! The Greatest of All Time tournament in 2020.

I never watched the show, but with Trebek’s passing, I have suddenly become an ardent fan and I must say, Jennings is great. I predict he’ll become the permanent host down the line.

SHORT TAKES— I stream, you stream, we all stream: Disclaimers on Muppet Show episodes running on Disney Plus? I’’m not so sure on this one … Been watching on Apple TV, Servant – the creation of M. Night Shyamalan and creative-partner Tony Basgallop. Night didn’t direct them all, just one episode on season 1 by my count, but what a captivating thriller. A married couple loses a baby and is trying to re-adjust with the use of a doll replacement – to ease the mother’s (Lauren Ambrose from Six Feet Under) recovery. They take in a nanny … and, the baby becomes alive! What? Chilling and harrowing. The husband (Brit-Toby Kebbell) is chef of some sorts and the way the food is tossed and turned and filmed is positively chilling. I’ll never look at an eel the same way again. Crazy for sure. And, I’m just getting started on Season 2. Season 3 is now being filmed …

Had occasion to watch Lou Reed’s 2004 seminal re-creation of his brilliant Berlin album; filmed at the St. Ann’s Warehouse in Brooklyn and I saw first-hand having been at the show. This was Reed’s crowning achievement for certain. Just a brilliant album from the day it was first released in 1973, it was a commercial failure, but all these years later it has become recognized as a masterpiece. With brilliant guitar work from Steve Hunter and producer Bob Ezrin conducting the band in a white-lab coat, it’s just a sensational show. Conceptualized by Julian Schnabel, with snippets of film, it took my breath away … again. Simply brilliant …

Via gene Cornish: It is with great sadness that I learned of the passing of Henry Goldrich, the owner of Manny’s Music. For me, being at Manny’s was like being a kid in a candy store and Henry was a great man. He was funny, engaging and just a mensch. He will be missed. There once was a time when 48th street between Broadway and Sixth was what was affectionately called Music Row. Music stores like Sam Ash, Alex Music, Greco’s Custom Guitars, Terminal Music and Rudy’s lined the streets … but, Manny’s was the crown jewel. Many times I’ve gone in there and saw a bona fide music star there playing a guitar. That street no longer has any music stores; in fact, condos will built there. Sad for sure …Donnie Kehr’s brilliant new solo album, Beautiful Strange  making the rounds at the labels … Celebrity-author Mark Bego to guest on Robert Miller’s Follow Your Dream podcast; starting next month Happy Bday Jonathan Demme, Chloe Salidor  and Niki Avers!