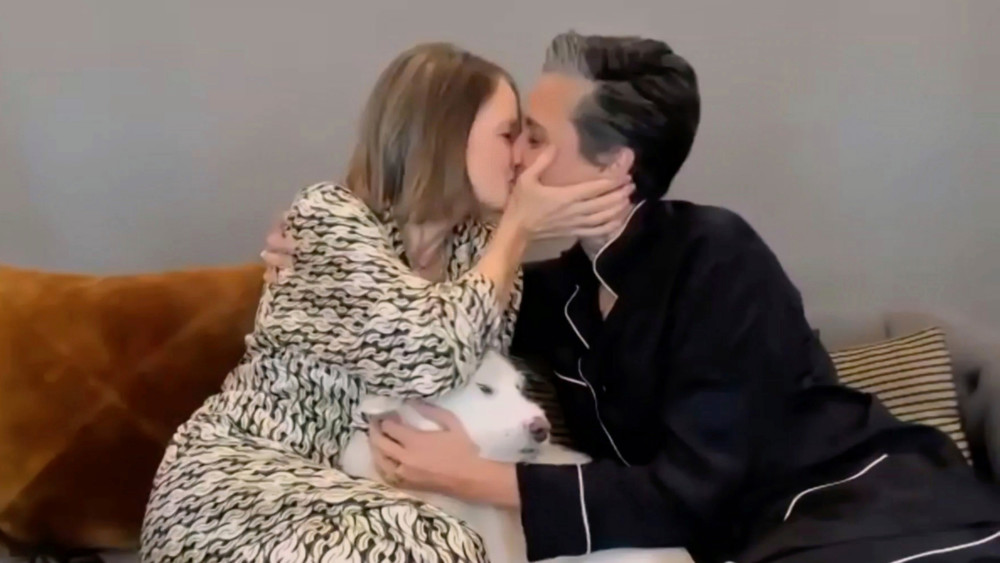 A VIRTUAL GLOBE FEST — This year’s Golden Gloves, the official kick-off to awards season, was different to say the least. With a minimal number of stars officially seen in-person and the event hosted by the always reliable Tina Fey and Amy Poehler (from both LA and NYC), it was an evening of frozen-screens; time delays and some winners and presenters not even realizing their mute-switches were engaged.

Most dressed up, even if only at home, yet Jason Sudeikis, in a tie-dyed hoodie, got my award for best-dressed. His Ted Lasso won and I must say, it is indeed the most genuinely interesting show of the year. He was actually in England (around 2:00 AM) when he delivered his speech for Best Actor.

I’m surprised my pick; The Trial of the Chicago 7 did not win; I saw it months ago and am still taking it all in. Just a brilliant movie. Good to see Jodie Foster (with gf Alexandra Hedison and their beautiful dog) win … in pj’s no less. Haven’t seen her movie (The Mauritanian) yet, but will this weekend.

And, The Crown’s Gillian Anderson won … and, gave her speech from Prague!

All in all, a good one … different for sure in this new virtual world.

The clip begins with a look-back at the long relationship between Mariska Hargitay’s Benson and Chris Meloni’s Stabler, which ended after SVU‘s 12th season in 2011 when Stabler abruptly retired from the police force.

The clip progresses to present-day at a crime scene where Stabler (Meloni) calls out “Liv!”. A shocked Benson (Hargitay) quickly turns, whispering “Elliot!”

Tastefully done and quite a surprise … is definitely sets the stage for the full-blown sit-down. Less is more always wins in my book.

The special 2-hour crossover event airs Thursday, April 1 on NBC. Meloni will first appear on SVU at 9 PM ET. It will be followed by the series premiere of Meloni’s spinoff Law & Order: Organized Crime at 10 PM ET on NBC.

It’s been in the works for ten years. Meloni calls his abrupt exit “inelegant,” and refuses to explain why, but pundits have posited that money (as usual) was the cause. Law & Order-mother-hen Dick Wolff is a notorious tight-one with the dollars. Witness Vincent D’Onofrio’s on/off relationship with Wolff. Arguably, D’Onofrio’s Law & Order: Criminal Intent may well be the best L&O show of them all.

I’ve met Meloni on several occasions and was always impressed by his focus. Will Organized Crime be a hit?With him aboard, I’d count on it. Here’s the promo:

SHORT TAKES — Funny moment from PR-pasha David Salidor (who is celebrating 36 years of his dis COMPANY firm next week): “I went out to eat last night for the first time in months and as I sat down, I heard the first record I ever worked on, Gilbert Sullivan’s “Along Again, Naturally,” then I heard Chicago’s “If You leave Me Now,” then the Doobie Brothers and so many more I instantly knew. I finally asked the waiter what channel or service this was and I swear to God, he said, it was Pandora, and The Tony Orlando Station!” … We hear there’s a documentary coming on the late-great ZE Records. In the early 80’s, ZE was the home of Kid Creole & The Coconuts; Suicide; Cristina; Material; and, Was (Not Was), featuring the great Don Was. Stay tuned for more news …

The CW’s much-heralded Superman & Lois premiered last week and it was pretty well done. I’ve been a Superman-fan since my youth and the plot of this one was Superman & Lois (Tyler Hoechlin and Elizabeth Tulloch), married, with two children (Jon and Jordan), having been let go at the Daily Planet, and moving back to Smallville to re-calibrate their lives. As wild as these changes may sound at first, they all work together amazingly well. And, did the kids inherit any of their pop’s powers? Just maybe. Hoechlin and Tulloch are pretty terrific too – Taylor having played the caped hero 8 times before. The special effects were surprisingly good; the writing pretty spot-on; and, the abundance of Easter Eggs throughout the show very, very cool. When Hoechlin is talking in the kitchen, on the blackboard behind him is scrawled the message call Siegal and Shuster – Supes’ creators. Consider me impressed with this one … Michael Bolton and Zooey Deschanel will host a Celebrity Dating show at ABC. It’s called scraping the bottom of the barrel folks!  … And, do you think Governor Andrew Cuomo’s having a tough week?