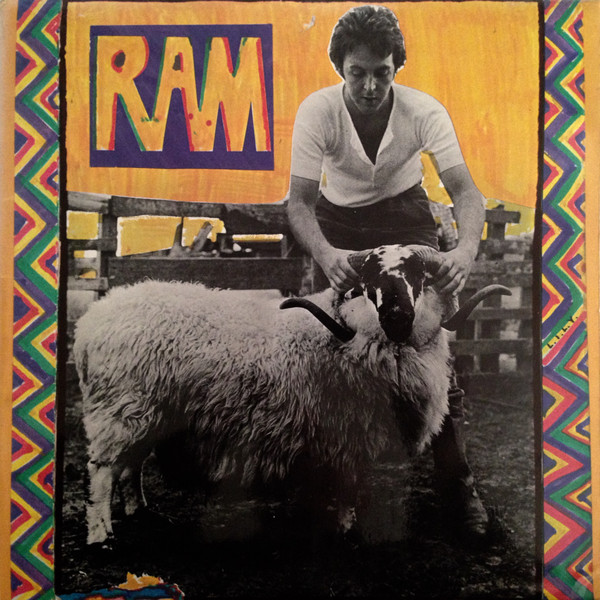 RAM ON — Paul McCartney’s RAM album always fascinated me: It was right after his brilliant McCartney solo album; and, the one before he formed Wings; and, the only record credited to Paul & Linda McCartney. When it came out in 1971 (May), the critics hated it. Jon Landau -well before Springsteen- called it in his review for Rolling Stone, “incredibly inconsequential” and “monumentally irrelevant”, and criticized its lack of intensity and energy. He also added that it exposes McCartney as having “benefited immensely from collaboration” with the Beatles, particularly John Lennon, who “held the reins in on McCartney’s cutsie-pie [sic], florid attempts at pure rock muzak” and kept him from “going off the deep end that leads to an album as emotionally vacuous as Ram.”

Robert Christgau, writing in the much-missed The Village Voice, called it “a bad record, a classic form/content mismatch”, and felt that McCartney succumbed to “conspicuous consumption” by overworking himself and obscenely producing a style of music meant to be soft and whimsical. Writing four years later, Roy Carr and Tony Tyler from NME suggested that “it would be naive to have expected the McCartney’s to produce anything other than a mediocre record … Grisly though this was, McCartney was to sink lower before rescuing his credibility late in 1973.”

With McCartney 3 coming this year, during the pandemic, which I enjoyed immensely, it’s worth looking back at Ram: I found it then, and now, extremely pleasurable. In fact, I haven’t been able to stop listening to it since I dug it out. Sure, songs like “Dear Boy” and “Too Many People” certainly reflected McCartney’s mindset at the time, but songs like “Monkberry Moon Delight” and “The Back Seat Of My Car” have to be two of his best songs ever. The latter in fact, must be favorable compared to a min-opera. I loved the song when I first heard it in 1971 and still love it now.

It’s also interesting that the song “Ram On” is a riff on the fake-name McCartney often used: Paul Ramon.

Honestly, most of the album sounds like a home-spun recording; even though musicians Denny Seiwell, Hugh McCraken and David Spinzoza contributed to it.

Face it: McCartney’s output has been nothing short of extraordinary, but with Ram he definitely hit a high bar. I loved it … and, still do.

Pitchfork, which seems to have somewhat eclipsed Rolling Stone, as the critical-music outlet of record, said this of Ram: “McCartney was inventing an approach to pop music that would eventually become someone else’s indie pop,” and called Ram “a domestic-bliss album, one of the weirdest, earthiest, and most honest ever made.”

Other wags said it was the first-ever indie-pop album (and, a masterpiece) … and, I fully concur.

MICK AND LINDSEY HANGING — Take a read at Andy Green’es startling story on Mick Fleetwood and how he’s mended-fences with Lindsey Buckingham – https://www.rollingstone.com/music/music-news/mick-fleetwood-reunion-with-lindsey-buckingham-imagines-fleetwood-mac-farewell-tour-1134758/

– As I  posited a few columns back, no question in my mind that there will be a Super-Fleetwood Mac tour soon, with Lindsey and Stevie back together again. I mean, how could there not be? …

PRIVATE TINA — (via Deadline) Dan Lindsay and T.J. Martin co-directed the sports documentary Undefeated in 2011, and their Berlin Film Festival Special Gala, Tina, could have shared the same title. While this is set in the world of music, its emphasis is on the resilience, survival and comeback of its subject, singer Tina Turner. Featuring a contemporary interview with Turner herself, the HBO Documentary Films title mixes talking heads with archive interviews and footage to paint a vivid picture of a musical legend. This is clearly an authorized biography — it’s executive produced by Turner’s husband, Erwin Bach — but it has enough verve and insight to entertain and enlighten.

The film opens with the 1981 People magazine interview in which Tina revealed she’d been abused by her former husband and musical partner, the late Ike Turner. Commencing her contemporary interview, Tina says she had reservations about speaking out back then, so she asked her psychic what was going to happen. The psychic reassured her it would be a new beginning: “It’s gonna break everything wide open.”

She was, of course, right, but it was quite a journey. The story rewinds to Turner’s teenage years, when the filmmakers place her life in cultural context, using popular media imagery to show the world that she grew up in. We see Vogue models and shots of glamorous movie stars — all influences on the young Tina, who dreamed of being a performer. Extensive archive footage shows her rise to fame with Ike, and shocking audio interviews with Tina and family members detail the abuse. Then there’s the heartbreaking story of how Tina’s parents left her and her siblings as children. Rather than reconstructions with actors, such events are illustrated by empty rooms and furniture, allowing us to imagine the scene and creating a sense of loss.

Several clips emphasize how hard it was for Tina to come out as a domestic abuse survivor, but how this helped other women. A clip from Oprah mentions the 50,000 letters the TV show received from viewers who could relate to her story. A big part of Turner’s life at this time was manager Roger Davies, who gives thoughtful contributions along with interviewees including Oprah Winfrey and Angela Bassett, who played the star in 1993 feature What’s Love Got To Do With It?

A joyful, playful tone is struck when Turner recounts the story of her romance with Bach, who also shares his side of the tale. When a camera leads us around their palatial home, this skates a bit too close to celebrity magazine territory. But the purpose is clear: to show us how far Turner has come, despite a series of enormous obstacles, from hardship to racism to abuse.

Unlike, say, Asif Kapadia’s Whitney, this doesn’t explore its subject’s musical ability in great detail, and that’s a shame. But there’s no shortage of pacy, energetic clips that pay testament to her voice, dance and performing skills — and there’s fun musical trivia, too. “What’s Love Got To Do With It?” was one of Turner’s biggest hits during her 80s comeback — yet it was originally recorded by the British bubblegum pop group Bucks Fizz. Tina, it seems, makes everything her own.

SHORT TAKES — Happy BDay Micky Dolenz-his new album Dolenz Sings Nesmith drops in early-May, on Glenn Gretlund’s 7A Records … Take a read of Markos Papadatos’ review of the Supreme Glamour book; by the late-Mary Wilson and Mark Bego in his Digital Journal – http://www.digitaljournal.com/entertainment/entertainment/review-supreme-glamour-by-mary-wilson-and-mark-bego-is-a-glorious-book/article/586385?fbclid=IwAR2BMgKyy-z5sKP2M4dNsXZgJU3p-qxoXppPlnYhPNCM3Upe-LlBjm2MNjo  … Wilson’s birthday is this Saturday and Bego and Andy Skurow , from Motown/Universal, will participate in a look at Wilson’s life… Check out Brooklyn Chop House, located on Nassau street in Lower Manhattan. Loved it …

J.H. Wyman’s premiere of Debris this week was pretty special. Wyman created Fringe – which we just loved- and Almost Human. Brilliant writer and creator. The story was plausible and the effects surprisingly good. One viewer hit the nail on the head: “It was a solid premiere. The two leads felt a bit stilted, and it sure as heck didn’t replicate the magic of the premieres of J.H Wyman’s other two shows – Fringe and Almost Human. But, still very entertaining with a lot of promise. I think it’ll take 4 to 5 episodes to really hit its stride” … And, congrats to Scott Shannon for 7 years on CBS-FM.