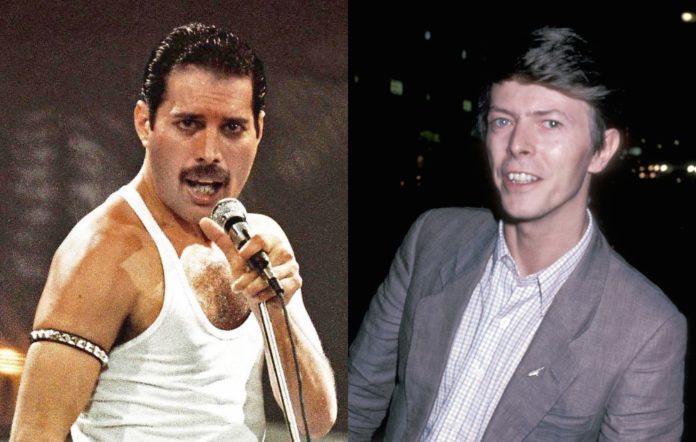 BOWIE QUEEN CREAM— (Via UCR) Queen drummer Roger Taylor revealed that the band had jammed  on some Cream covers with David Bowie during their 1981 studio sessions together.

In 2017, guitarist Brian May said there was probably more to be heard from the brief collaborative period that resulted in the release of the Queen and Bowie hit “Under Pressure.” In a recent interview with Record Collector, Taylor hinted at what might remain in the vaults.

“If we look to the archives, there’s probably stuff,” he said, noting that they’d played “all sorts of old songs … whatever came into our head. … We would do the odd thing like covering old Cream songs. I remember we did ’N.S.U.’ and ‘I Feel Free,’ just for a laugh really, and then we decided, ‘Let’s write one for ourselves.’”

May recalled that the sessions – which came about simply because Bowie and Queen happened to be in Switzerland at the same time – found focus once “Under Pressure” began to take shape. “That became very much the priority,” the guitarist said. “So there are only little sketches apart from that.” One of those became “I Go Crazy,” a 1984 B-side, but May said it turned out “very different to the version that we started off when David was around.”

Four years ago, he said the session experience “wasn’t easy, because we were all precocious boys and David was very … forceful.” He recalled how Bowie and Freddie Mercury “locked horns” in “subtle ways, like who would arrive last at the studio. So, it was sort of wonderful and terrible. But in my mind, I remember the wonderful now, more than the terrible. … But those are the things that happen in a studio, that’s when the sparks fly, and that’s why it turned out so great.”

For the record, “Under Pressure” is a great track and has held up for sure over the years.

Per Nielsen Live+Same Day official national numbers, Music’s Biggest Night delivered an average of 8.8 million viewers for the network during the ceremony’s broadcast on Sunday night at 8 p.m. ET with a 2.1 rating in the key, adults ages 18-49 demographic.

Nevertheless, this year’s telecast was still the highest-rated broadcast of the night, and it was the most-streamed Grammy show ever with 83% more live streams compared to 2020. In addition to cable, the show could be accessed on the CBS website and app as well as the network’s recently re-branded and debuted video-on-demand and over-the-top media streaming service Paramount Plus. The ceremony was also one of the most engaging programs on social this year, with over 77 billion impressions. Conversations related to performers, presenters and the special dominated social media with #Grammys trending in the top ten for 18 hours and peaking at #1.

The primetime ceremony had an impressive lineup featuring over 22 musicians, including Bad Bunny, Black Pumas, Cardi B, Brandi Carlile, Mickey Guyton, Haim, Brittany Howard, Miranda Lambert, Lil Baby, Chris Martin, John Mayer, Maren Morris and Roddy Ricch. The stars performed throughout the night in a mix of live and pre-recorded sets taking place from four stages surrounded by the ceremony’s talent, nominees and guests. A fifth stage was used by the show’s presenters, many of whom were independent music venue personnel from the Apollo in New York, the Station Inn in Nashville and the Troubadour and Hotel Café in Los Angeles.

Originally set for Jan. 31 to kick off awards season, the 2021 Grammy Awards were rescheduled due to the fraught state of Los Angeles at the time as the city and county contended with an unprecedented COVID-19 winter case count surge.

I hate to say it: but, it wasn’t your parent’s Grammy’s for sure. New producer; new director (Hamish Hamilton); and, mostly new acts. It was certainly a welcomed change, but also somewhat alarming for sure. The whole “WAP” performance was something maybe for a bit later in the evening. And, damn, what do the Me Too stalwarts say about this song? Haven’t heard from them and that does seem odd.

My biggest criticism was the 15-second Eddie Van Halen-tribute … hey, the guy deserved much, much better to my mind. Outgoing-director Ken Ehrlich would NEVER had let that happen.

But, for me, the biggest surprise was Ringo Starr, looking more like a 40-year old, than an 80-year old. Sure, it was for his new EP-CD (or, whatever!) called Zoom In; a somewhat lackluster effort for sure. I mean, Ringo singing a Diane Warren song … please!

For me, his 1992 album Time Takes Time was his best effort since his Ringo album in 1973. Check out the song “Weight of the World” (with Jellyfish on vocals) from 1992. Just brilliant!

Seen: PR-pasha David Salidor and Tommy Boy’s Tom Silverman lunching at NYC’s Eataly  … Robert Englund, 73, best known for playing Freddy Krueger, will join season four of Netflix’s Stranger Things as a murderer imprisoned in a mental hospital; the show is now filming in Georgia. No date has yet been set for the premiere of S4 …

Eppy from the legendary My Father’s Place joins Robert Miller Wednesday on his Follow Your Dream podcast … My favorite new word of the week: chatterati! … Just announced: The 4th season of AMC’s sumptuous Killing Eve will be its last … Watched Netflix’s I Care A Lot, from writer/director J.Blakeson, starring Rosamund Pike and Peter Dinklage. It’s a rather frightening tale of the health-care system gone wrong. It won an award at last year’s TIFF; and, a Golden Globe for Pike. Highly recommended … And, RIP Yaphet Kotto (Midnight Run; Alien and, TV’s Homicide).