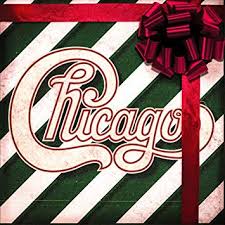 CHICAGO  CHRISTMAS — Chicago’s 37th album, is their fourth holiday collection and it’s just one terrific package. For me, a devout-Burt Bacharach fan, the band’s rendition of his (and, Hal David’s) “What The World Needs Now Is Love” is just sublime. With (Skinny Boy) Robert Lamm handling the vocals (as well as the arrangement) it’s just a sensational rendition and, truth be told, just the right kind of sentiment we need right  now.

Produced by the band’s Lee Loughnane, it’s certainly not the cutting-edge Chicago of the James Guercio days, but, is an enjoyable as ever. The lead-off track, “(Because) It’s Christmastime” immediately sets the tone for the whole album … and, its a great track.

We also loved “All Over The World” which stands on its own as a terrific single choice. The tone in this song is vintage-Chicago and probably why I immediately gravitated towards it.

James Panko’s “I’m Your Santa Claus” and “Merry Christmas, I Love You” immediately convey the season’s joys as well.

Touring with Rick Springfield next year (an inspired coupling!) and being in this year’s Thanksgiving Day Parade … Chicago never disappoints.

SPENCER GOLD — I’ve been around for quite a while (some may even say too long!) and have had the opportunity to write about some terrific personalities, and some not so terrific personalities, but, on a rain-drenched Monday morning in New York, I spent a few hours in the morning, and a bit more at night, with actor J. Robert Spencer (Jersey Boys; TONY-nominated in  Next to Normal) and I must say, that he is without a doubt, not only a star-on-the-rise, but one of the nicest people I’ve ever had the good fortune to be around. His determination, his observational skills, his commitment to the art, just knocked me out. A real true breath of fresh air.

I met him Monday AM, with his pr-man David Salidor, at a taping of the Zach Martin podcast (Big Fat American), and for the next hour, listened to his story; his thoughts about family and his commitment to the arts. Heartfelt stories for sure, but with a terrific sense of humor about it. The two also talked about the writing, recording and release last week of his Christmas single, “Waiting On Christmas.” That track has been greeted with a terrific response and, IMO, is on its way to becoming a new holiday must-have.

Listen to it here: https://www.spreaker.com/user/bigfatamerican/waiting-on-christmas-copy?fbclid=IwAR2WOXywUxZMl0ELF9Zd80CwnA1QV45y0Xsyli1bPV6y4W5byRkDphM25DU

After a few hours drying out, we all re-grouped at the Big Apple Circus tent at Lincoln Center, for this year’s Broadway For All Cabaret At The Circus holiday benefit. With the rain just plummeting down outside, Bobby did a sound-check with the kids who would join him on the chorus, for the world premiere of the song.

There are several projects in the wings for Spencer. He told me a few of them and they all sounded terrific. One of the good guys for sure. Terrifically impressed. Watch his star rise.

We also saw our old friend Pete Sanders at the event; handling PR-for the event. Also seen there: Spencer’s PR-man David Salidor and manager Nyle Brenner;  Broadway For All’s Osh Ghanimag and Noah Harouche; and, Jenny Lynn, Spencer’s wife. A great time was had by all.

MILLER’S GROOVE — Robert Miller’s Project Grand Slam played NYC’s The Groove – which was totally re-furbished in four days according to the club’s manager Julien, Sunday night and it was one of their best shows ever. Miller’s aggregation played all their signature tunes, but also previewed several new numbers for their next album: which is set for early next year. The new track “I’m Falling Off Of The World” is an instant PGS-classic. Also, their take on The Beatles’ “I Wanna Be Your Girl” (which Ringo sang) is sensational.

Guitarist Tristan Clark and vocalist Marilyn Castillo both really shined this night, as did Miller on bass. Just a sensational show.

Miller’s PGS is re-imagining jazz-fusion and it was interesting watching the crowd grow and grow and really champion the band. It was an early show this Sunday, but by the time they finished, the house was packed.

Miller’s upcoming show at My Father’s Place (February 2-21-20) in Roslyn, Long Island, will be terrific. There’s a serious number of jazz-fans out there and they’ll love the performance.

SHORT TAKES — Celebrity-author Mark Bego visited with Micky Dolenz on one of the final dates of his It Was 50 Years Ago tour, at the Celebrity Theatre in Phoenix last week. Bego’s Rocketman (Pegasus), on Elton John is out next month … Here’s an interesting new tour going out in the New Year: The Guess Who; Firefall; The Babys and Ronn Moss from Player. Say what you will, but these multiple-headline acts do work very well. But, I wonder how many, if any, of the original members are included. Industry pundits say you need only one original member to make a go of it … Monday’s Golden Globes nominations were sure interesting. For the first time in the TV category, network TV was essentially ignored. Its seems to be now all about, and only about, what you can stream.The Movie noms were more on point. Kudos to Christian Bale, Leonardo DiCaprio and Brad Pitt. Those actors, in their respective roles, really deserve the attention. Rocketman was a surprise too. If you recall, the out-of-order sequences really  bothered me. But, the subject matter and songs were well played. Marriage Story on Netflix, I do not understand at all. That movie did bother me, and, Michael Douglas and Alan Arkin can do no wrong … Remember when Micky Dolenz sat in with The Roots on the Jimmy Fallon Show? NBC-mate Seth Meyers’ band often features a guest-drummer. J. Robert Spencer started playing drums because of Micky Dolenz and shortly could be the guest drummer on Meyers. Amazing, right? …

And, finally, for a terrific holiday gift and awesome read, check out Wendy Stuart Kaplans’s She’s The Last Model Standing. Written by Stuart and David Wallace, it is a veritable treasure trove of fabulous intel. Stuarts says: “This holiday season it doesn’t mater if you’ve been naughty or nice cause I’ve been both!.” Available on Amazon. Terrific read.