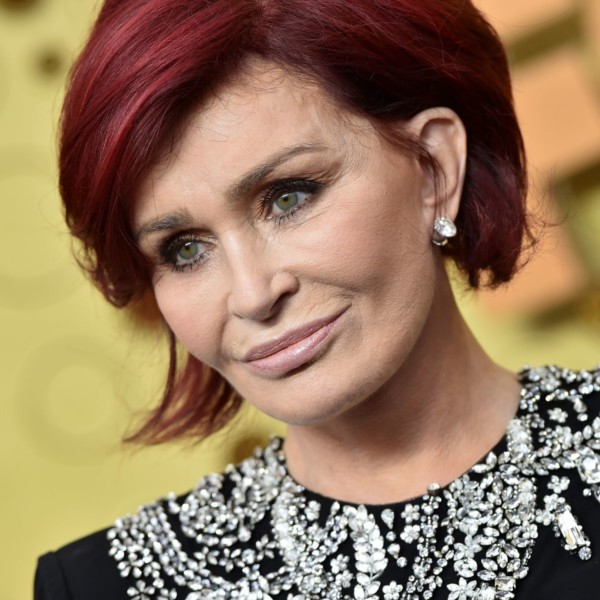 SHARON CANCELLED — (Via Deadline) Sharon Osbourne’s distinctive voice will no longer be heard on The Talk.

Amid controversy and recriminations over misconduct and claims of offensive language by Osbourne on the show to co-hosts past and present, the sharp-tongued former America’s Got Talent judge is leaving the CBS daytimer.

Having completed a probe into the heated March 10 discussion about race on The Talk, which triggered the controversy, CBS just put out a statement saying that Osbourne made the decision to depart the show. The network also said The Talk, which was put on hiatus on March 12 in the immediate aftermath of Osbourne’s on-air outburst, will be back on April 12.

Here is the statement in full:

The events of the March 10 broadcast were upsetting to everyone involved, including the audience watching at home. As part of our review, we concluded that Sharon’s behavior toward her co-hosts during the March 10 episode did not align with our values for a respectful workplace. We also did not find any evidence that CBS executives orchestrated the discussion or blindsided any of the hosts.

At the same time, we acknowledge the Network and Studio teams, as well as the showrunners, are accountable for what happened during that broadcast as it was clear the co-hosts were not properly prepared by the staff for a complex and sensitive discussion involving race.

During this week’s hiatus, we are coordinating workshops, listening sessions and training about equity, inclusion and cultural awareness for the hosts, producers and crew. Going forward, we are identifying plans to enhance the producing staff and producing procedures to better serve the hosts, the production and, ultimately, our viewers.

After 11 seasons, Osbourne was the last original Talk co-host to remain on the series. The Talk premiered in 2010 with the famed rock manager, The King of Queens star Leah Remini, Julie Chen, Sara Gilbert, Marissa Jaret Winokur and Holly Robinson Peete.

Clearly looking to be a topical arsonist of sorts, now-ex-Good Morning Britain co-host Morgan vehemently exclaimed on UK TV just days before The Talk showdown that he did not believe comments by Meghan Markle to Oprah Winfrey in their blockbuster interview that first aired on CBS on March 7.

Recalling the beginnings of her and Prince Harry’s departure from royal life, the Suits alum and Duchess of Sussex told the Queen of Talk in their sit-down that members of the royal family and household made racist statements and disregarded her mental health issues. On The Talk, Underwood told Osbourne, “While you are standing by your friend, it appears that you are giving validation or safe haven to something that he has uttered that is racist.” The remarks caused an explosive reaction from Osbourne, both in front of and later behind the camera.

As the CAA-repped Osbourne incredulously both tweeted an apology of sorts and complained that she had been blindsided by producers and CBS executives in the exchange, the blast radius of the situation grew. In a story posted on March 16, Osbourne was alleged to have used racial epithets and sexual slurs towards former co-hosts and Talk EPs Chen and Gilbert, respectively. Former co-host Remini claimed in an interview with journalist Yashar Ali that Osbourne had sounded off with the loaded insults to her back in 2010 in reference to Asian-American Chen and openly gay Gilbert.

Later on March 16, CBS responded by extending the sudden hiatus of The Talk until March 22 as a March 12 announced internal probe continued looking into what went down in recent days and years ago. “Sharon is disappointed but unfazed and hardly surprised by the lies, the recasting of history, and the bitterness coming out at this moment,” Osbourne’s said publicist in a statement that same day. Sources close to the daytime talker tell Deadline that the subsequent media blitz Osbourne went on, including an interview with Entertainment Tonight, really “burned a lot of bridges.”

As talks about the lawyered-up Osbourne and The Talk continued, CBS on March 19 said the show would remain on hiatus through at least another week with, March 29 or 30 penciled in.

Now it’ll be mid-April after the already pre-scheduled hiatus for the week of April 5.

To add flame to the fire, back on March 12 initial Talk co-host Robinson Peete took Osbourne to task for allegedly calling her “too ghetto” for the show and working to get her axed in 2011. Throwing personal correspondence with the ex-21 Jump Street star up on social media in reaction, Osbourne also claimed she had no power to get anyone fired from The Talk and that she never used terms like “too ghetto” in reference to Peete. That latter declaration was weakened when a clip from Season 1 of The Talk surfaced of Osbourne using that very term on-air in reference to Remini.

Handling the solo career of her husband Ozzy Osbourne for decades as well as managing the likes of the legendary Motörhead, Sharon Osbourne became famous in her own right with the debut of reality series The Osbournes on MTV in 2002. She went on to front her own short-lived syndicated talk show in 2003, serve as a judge on the UK’s The X Factor and appear as a contestant on the Donald Trump-hosted Celebrity Apprentice on NBC in 2010.

In that context, as they say on The Talk, “Let’s talk soon.”

I’m not a fan of the show, or Osbourne for that matter. Her father Don Arden managed Jeff Lynne’s ELO and Ozzy and created a firestorm of controversy everywhere he went and with everything he did. But, Dad Don got his clients good deals, so if you’re from the old school of management … he done good.

Sharon obviously learned well … and, she’s been on The Talk since its inception – 11 years ago. Writer Roger Friedman said she was a victim of her own hurbris, which I readily agree with.

I’ve never met her, but the inside skinny on her was very clearly not good. Still, her frankness and honestly (I think) was awkwardly refreshing. face it, she had no filter.

With all due respect: who is Cheryl Underwood?

Shows like The Talk and The View … they shouldn’t even be on any more. That said, they bring in millions and I guess, are just for the housewife/homebound set. It’d be interesting to know, how much their ratings have increased since the pandemic. I bet a lot. But, I predict The Talk will be gone by summer.

NoMAD GONE? — NoMad hotel operator Sydell Group alerted staff that the hotel would be shutting down for renovations on April 2, according to internal communications shared with Eater, as well as a source from within the hotel group. The restaurant and bar will close down on March 28.

The news was shared with NoMad employees during a staff meeting on March 18, according to a source close to the Manhattan restaurant, leaving the staffers with 10 days’ notice before the restaurant shut down. Benefits have been extended for staffers through April, according to the source, but no severance packages were offered to hourly employees. Staffers were told that the renovations would take four to five months. No assurances were explicitly given that their jobs would still be available after the hotel reopened, according to the source. The company declined to comment on details related to the closure.

The NoMad hotel in Manhattan, which is owned by private equity firm Yucaipa (owned by the mysterious Ron Burkle) and operated by Sydell Group, has a fraught history of mismanagement and financial troubles. The groups’ top owners traded blows in multiple past lawsuits in 2017 and 2018, while the hotel itself was sinking in debt. Both companies ultimately managed to stave off a foreclosure auction of the property in 2019, according to the Wall Street Journal. The property temporarily closed when the pandemic first hit NYC last March, then reopened in September with a new rooftop dining space.

Meanwhile, fine dining chef Daniel Humm slung his own lawsuit at both Yucaipa and Sydell in January this year. Humm claimed that the companies still owe him nearly $2 million in unpaid management fees following the chef’s split with the company one year ago, according to the lawsuit. In response, Sydell called the lawsuit “baseless and inaccurate in nearly all respects.” That lawsuit is still ongoing.

Humm and Guidara were responsible for launching the celebrated NoMad restaurant inside the hotel through their former hospitality group Make It Nice. It was an instant success, drawing crowds from the get-go for its lauded bar program and head-turning dishes like its whole roast chicken. Make It Nice also ran food and beverage programming for subsequent NoMad hotel locations in Los Angeles and Las Vegas, strengthening the chain’s acclaimed fine-dining reputation. After Humm and Guidara went their separate ways in 2019 and Humm assumed sole control of Make It Nice, the split from Sydell followed shortly after.

NoMad Los Angeles has been temporarily closed due to the pandemic but ultimately plans to reopen as pandemic restrictions lift in the city, according to the source from within the hotel group. NoMad London — the newest addition to the hotel chain’s flashy lineup — is now scheduled to open on May 25, after its December opening was delayed due to the pandemic.

I can tell you from numerous first-hand meals at the Chelsea-based restaurant –with Humm- it was simply spectacular. Humm might just be the star-chef of all-time with just phenomenal food. It was an exceptional hotel too … a real shame if it permanently shutters.

SHORT TAKES — HBO’s doc of The Bee Gees was extraordinarily good and their take on Tina Turner -which aired this past Saturday night- just superb. Check this one out on Trini Lopez, entitled My Name Is Lopez … looks great:

We hear that producer-extraordinaire Richard Perry’s Parkinson’s has gotten so severe that he had to cancel all appearances in tandem with his just-out bio Cloud Nine via Redwood Publishing. First the publisher was plagued with distribution issues, now this. So sad; such a talented personality. I met him years ago and the first thing I noticed in his bag, neatly arranged, were dozens of vitamins. He obviously took great care of himself …

Micky Dolenz interviewed by Forbes this week in conjunction with his new album Dolenz Sings Nesmith; out in May … ABC is charging 2 million for a 30-second commercial for this year’s Oscars broadcast. Seems a tad high when no one even went to the movies this year. Guess you got to get it while you can. Shameless for sure …

Celebrity-scribe Mark Bego gets the Follow Your Dream podcast treatment this Monday with Robert Miller and author J.D. Belcher (The Inescapable Consequence) speaks to Ray K. … Godzilla vs. Kong premieres on HBO March 31. Think I’ll take a pass on this one … Romeo Delight’s show this past Saturday night at Sweeney’s was a sell-out. We can also reveal that a Van Halen documentary is moving forward and Romeo Delight’s Buddy Blanchard will be interviewed for it  … And, this just in: John Waters has joined the cast of Amazon’s The Marvelous Mrs. Maisel Season 4. Waters will appear in a guest starring role in the fourth season of the critically-acclaimed series, with the exact nature of the character he is playing being kept under wraps. Season 4 is currently in production in New York.