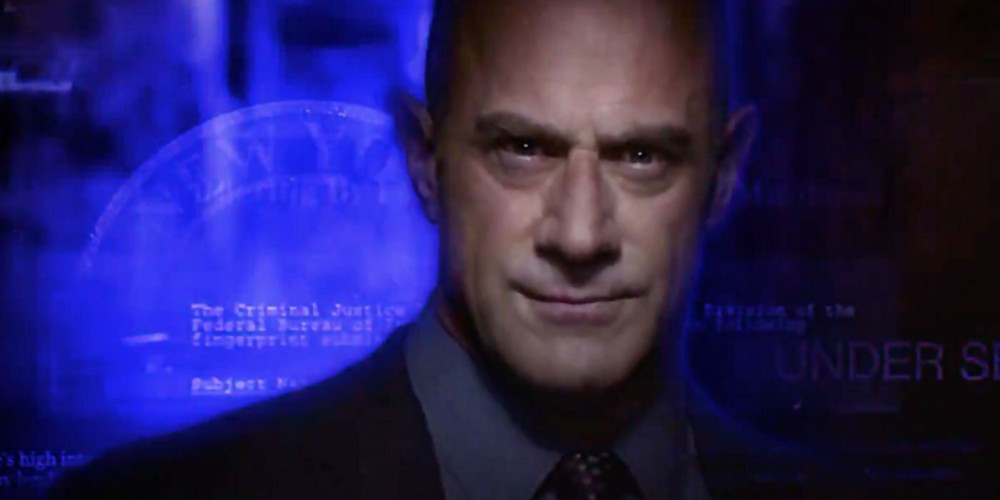 ORGANIZED CRIME — Thursday was the second installment of NBC’s Organized Crime, featuring Elliot Stabler (essayed by Christopher Meloni) back onscreen after a long hiatus from the original Mothership.

The first episode was two-weeks back right after the much over-hyped re-union on Law & Order: SVU when Meloni and Mariska Hargitay (Olivia Benson) re-united. As noted, that was a pretty terrific script – which was rumored to have gone through three major re-writes and several screaming matches, before the final version was locked.

The numbers the next day said it was an audience of 7 million; turns out it was closer to 8 million.

Organized Crime doesn’t follow the episode-by-episode procedural that all the other Law & Orders do. It also features a somewhat tweaked up opening which is pretty cool.

Turns out the 9-epsiode season of OC, features a match-up, if you will, between Stabler and Richard Wheatley, brilliant played by a big favorite of mine, Dylan McDermott. In the first episode, his father, played by Chazz Palminteri (and, whose last name was inexplicably Sinatra), was effectively offed by Wheatley.

Stabler is not in charge and is surrounded by five other “new” faces. I think that’s one of the problems … how can you effectively believe in these people if you don’t even know them. Stabler’s boss (Danielle Moné Truitt as Sgt. Aynnna Bell) is tough, but seemingly after not liking Stabler in the premiere episode, now finds him as a necessary component. The rest of them, especially one who was introduced Thursday (as a former compadre of Bell) and, as kind of a Richard Belzer-comic-foil, we’ll reckon they all need some time to properly blend in.

SVU has been on for 22 seasons and as such, there’s been built up a sizable knowledge of the show and its cast.

Can OC do it? With a strong lead like Meloni, anything’s possible.

Btw: SUV’s show Thursday, with yet another script by writer-extraordinaire Denis Hamill, was just brilliantly written!

MICK & MICHAEL ——  (Via Ultimate Classic Rock) Michael Anthony’s longtime bass tech, Kevin “Dugie” Dugan, recalled the moment when Mick Jagger threatened to have him killed – only to realize it was a revenge prank.

The moment took place several years after Van Halen performed before the Rolling Stones at a 1981 concert. During Van Halen’s set, Anthony encountered a problem with his favorite bass, and Dugan was rushing toward a backstage storage box to collect a set of strings.

“I see Bill Graham, the promoter, and he’s leaning on my workbox talking to some other guy,” he recently told Ultimate Guitar. “So, I yell, ‘Bill! Get out of the way!’ Bill jumps out of the way, and I grab the door of my workbox and throw it open. … The other guy he was talking to, the door hits him in the chest, and he flies back on his ass about five feet. I yell sorry, grabbed the strings, ran back out, changed strings and got Michael his number one bass back.”

He immediately returned to apologize to Graham, who told him, “Don’t worry about it. We were in your way.” Only then did he realize that person who’d been caught by the door was Jagger. “Michael comes offstage,” Dugan said, “and I’m not sure how he found out so quickly, but the first thing he says is, ‘You knocked Mick Jagger on his ass?’”

Years later, Dugan offered to let guitar tech Jim Barber stay with him while the latter worked on a Jagger recording. “I went to LAX [airport] to pick him up, and there’s a limo and a couple vans for all the gear he flew in,” he said. “So, I started helping go back and forth and grab gear and put it in the van, and every time I’m walking past this limo.”

As he helped carry equipment, he had to keep passing the limo with two crewmen standing beside it. “They open the door to the limo, blocking my path, and they push me into the limo and slam the door shut. … Mick Jagger is sitting there by himself, and he looks at me and he goes, ‘I understand we’ve met before.’ … I’m sitting there thinking, ‘What the fuck?’”

Jagger asked him to help persuade Anthony to make a guest appearance on his upcoming solo album, and then invited Dugan to dinner. “Then he says ‘Oh, and one more thing I’ve got to mention,'” Dugan recalled. “All of the sudden, his facial expression changed, and he lunged at me, grabbed me by my shirt … pulls me towards him and says, ‘If you ever knock me on my ass again, I’ll have you killed!’”

The roadie admitted he was “horrified” until Jagger started laughing and admitted, “I can’t keep a straight face.” He continued: “[Jagger] rolls the window down, and there were 10 people outside laughing and saying, ‘We got you!’ That was pretty funny. The fact that Jim got Mick to do that is something else.”

Reflecting on 40 years of working with Anthony, Dugan described the bassist as “a wonderful friend and the nicest rock star in the business.” He recalled “the first week of [Van Halen tour] rehearsals he’d be going around asking everyone’s name and what they do. … During rehearsals, he would take everyone out for dinner twice … 80 guys! And he’d pick up the tab. Then, at the end of rehearsals, he’d take everybody out again and say, ‘Order whatever you want and whatever you want to drink.’ He’s just the nicest, most down-to-earth guy and the most incredible singer.”

SHORT TAKES — Nomadland walked off with the lion’s share of prizes at Saturday’s British Academy Film Awards, taking Best Film, Director, Actress and Cinematography. The Chloé Zhao-helmed Searchlight picture thus adds to its awards season momentum, and makes Zhao only the second woman ever to win BAFTA’s directing prize, a day after she achieved the same feat at the DGAs. An Oscar seems a lock …

As expected, Godzilla vs. Kong made up for its down second Friday ($3.88M, -67% off Good Friday) with a solid Saturday of $6.1M that was up close to 60% which makes the pic’s second weekend $13.3M, -58% for a running domestic total of $69.5M. That ease in weekend 2 would be considered quite standard during pre-pandemic times, and is a very good hold. Ironic that this movie could be the hero of the post-pandemic time. I’m sure the makers of No Time To Die are literally crying in their soup … Interesting reviews of Star Trek Discovery season 4 trailer. Looks like they’re blowing it all up again and starting fairly fresh. I watched Season 1 and enjoyed it. But still no match for The Next Generation and the original. Check the trailer out here:

… And, I’ve watched every episode of CBS’ Clarice  – yes, based on Clarice Starling and it’s terrifically well done, but, has anyone noticed –other than me- how stylistically close it is to Bryan Fuller’s Hannibal show? That Hannibal show (with the brilliant Mads Mikkelsen) was simply fantastic. Rebecca Breeds as Starling is terrific and the writing off the charts. Rather than have every episode end … it’s drawing one case over several episodes. Great idea … maybe they got it from Organized Crime?

Suzanna BowlingJanuary 11, 2023
Read More
Scroll for more
Tap
Anniversary of Warsaw Ghetto Uprising to Include Musical Performance by ‘Fiddler on the Roof’ Star Daniel Kahn
What to Watch in The New Year: April 13